Leaving Ajo, Arizona we headed north to Gila Bend and I-8W towards Yuma which is located on the Colorado River in the southwest corner of Arizona.  There’s precious little on this stretch of highway but there is a place named Dateland where surprise! there’s a date grove!  We like dates, and so we stopped, sampled seven kinds (Honey Dates were the best) and bought some of these sweet healthy treats.  We also tried their “world famous” date milkshake…okay dokey, we can scratch that off the list now 🙂

As you’ll note in the title above, we had a mission on this leg of our adventure.  Having been to Bisbee we know the 3:10 to Yuma movie had that location all wrong.  However, since the movie ends with the train just leaving Contention City we wanted to actually see the notorious prison Ben Wade implies he will once again escape from.  The first seven inmates entered the Territorial Prison at Yuma on July 1, 1876 ( five days after Custer had his last stand at Little Big Horn in Montana and the year my grandfather Deppa was born) where they were locked into the cells they had built themselves. 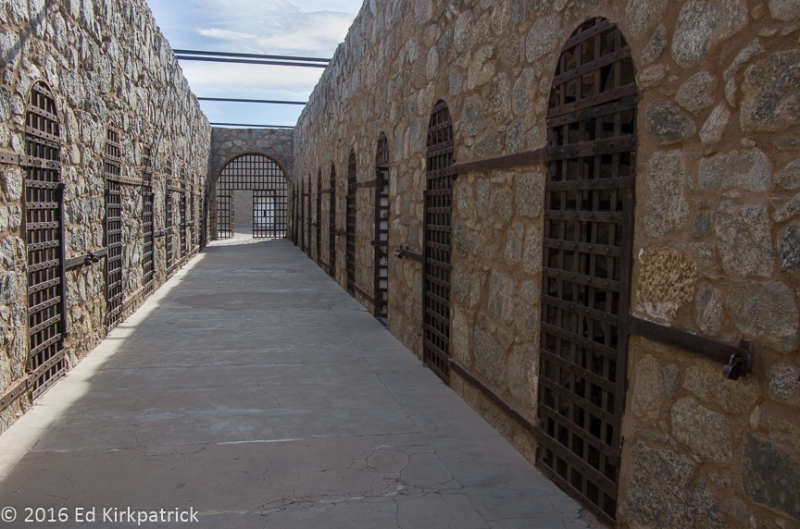 Cell block walk used to be covered with a second story that was the infirmary and offices.

Over the course of 33 years 3,069 prisoners including 29 women (many incarcerated for adultery) were held here.  Although there were many attempted escapes only 2 from within the prison confines were successful.  While we’re not sure it’s worth a trip to Yuma, do put it on your MVL (Must Visit List) if you’re in the area.

While plotting our travels on Google Maps I had noted something marked Spiral Labyrinth outside the Kofa National Wildlife Refuge 6 miles down a dirt road off US Hwy. 95 in Arizona.  I was curious, so I did a little searching and found next to nothing about this, but what I did find was interesting so of course we went looking.  Of unknown origin, but not old, this very carefully built stone labyrinth is amazing and fun.  Someone worked really hard and near as I can find it’s almost a secret.  Put it on your MVL…but….you have to find it yourself 🙂

Marti went in the entrance and it took her about 20 minutes to hit the center.  Then she turned around and walked back out…  another 20 minutes.

From the labyrinth, we headed for California’s US Hwy 95 and Blythe where we were looking for the very ancient Blythe Intaglios.  I have known of these geoglyphs for most of my life and was very excited to see them.  The road they are off of went quickly from bad to nope, so we only managed to see 3 of them.  They are behind ugly protective fencing (why can’t people behave?) so some of the magic feeling is gone.  Even so, one can’t help but wonder… why?  Put them on your MVL.

The image is created by scratching away the darker surface stones which reveals the lighter colored soil underneath.  Unlike the labyrinth, there is no ridge of stones because they removed them.

After spending the night back at Arizona’s Cattail Cove State Park we headed out for our next California destination, dry camping at Hole In The Wall.  Sandwiched between two interstates, 15 & 40, the Mojave National Preserve and indeed the area leading to it, is incredibly vast and empty…and beautiful.  We found a lovely spot in the almost empty campground and settled in for several days.

Looking down on our home for a few days.  Note the stratification in the mountains across the valley.  It became very, very windy at night with gusts near 50 mph but this stopped after dawn every day. We asked the volunteer camp host if it was always this windy and he said, “No, only when it’s windier.”

There are a couple of stories about how this spot got named Hole in the Wall.  One is because of all the holes in the rock, but my favorite is because a former gun-slinger finally settled down in the area and named it for his former hide out 🙂

Looking up Banshee Canyon. See the holes?  The holes are in volcanic ash which is softer than other rock and the wind and water erodes the holes.

The first day we hiked all around behind our site enjoying the views and rock formations.   On day two we did the Ring Loop Trail into Banshee Canyon.  It is so named because early settlers said the wind blowing through sounded like a banshee!  It is an incredibly neat place and I highly recommend it go on your MVL.

From our first night’s walk this scene is just uphill from our campsite.  The yellow lichens are really pretty.

We are currently doing chores in Pahrump NV, not a garden spot but they have real stores, gas stations and a very nice Escapee’s RV park not to mention the Chicken Ranch Brothel just down the road.  It’s Nevada, what can we say?  On Monday we head for Death Valley.  We’ve seen it a bit and WOW…..can’t wait to show & tell you all about it!

This shows a cell with the iron work that surrounded each cell; doors, floors, walls and ceilings.  All the iron work, welding and shaping was done by inmates.  In fact, everything in the prison was made by the inmates.

This shows two cell doors. 1/4″ thick welded and riveted steel that are connected together to prevent one door breaking without the other.  Note that the locks are a good three feet away from the opening on each side.

Ahhh… the dark cell.  Solitary confinement in a steel cage.  These cells were hand dug into the caliche hillside.  Caliche is a type of clay/rock that is very, very hard. 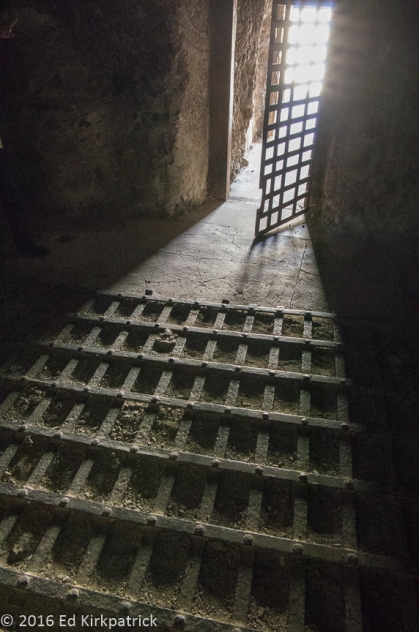 Inside the Dark Cell, only the floor of the cage remains.  There is a ghost story for this cell and while we were in there Marti saw something flit by! She looked again and to her relief it was just bats. 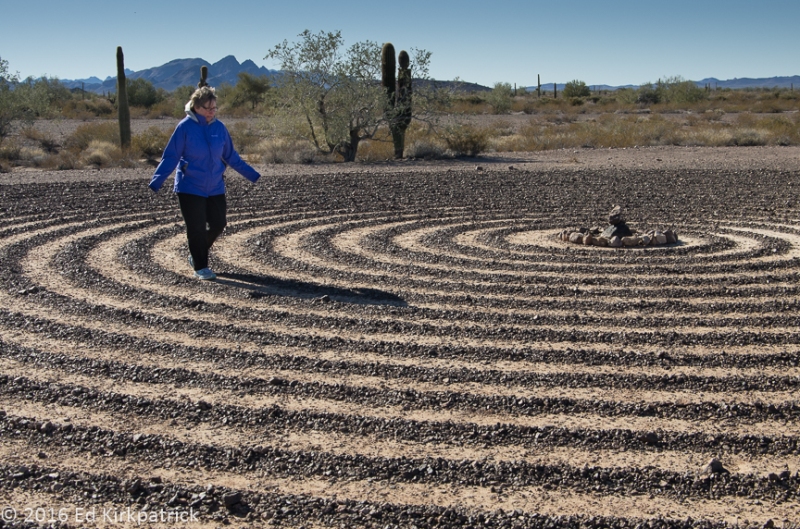 About 2/3’s of the way in an optical illusion occurs that makes the ridges turn into waves rolling towards the center. Amazingly cool…! 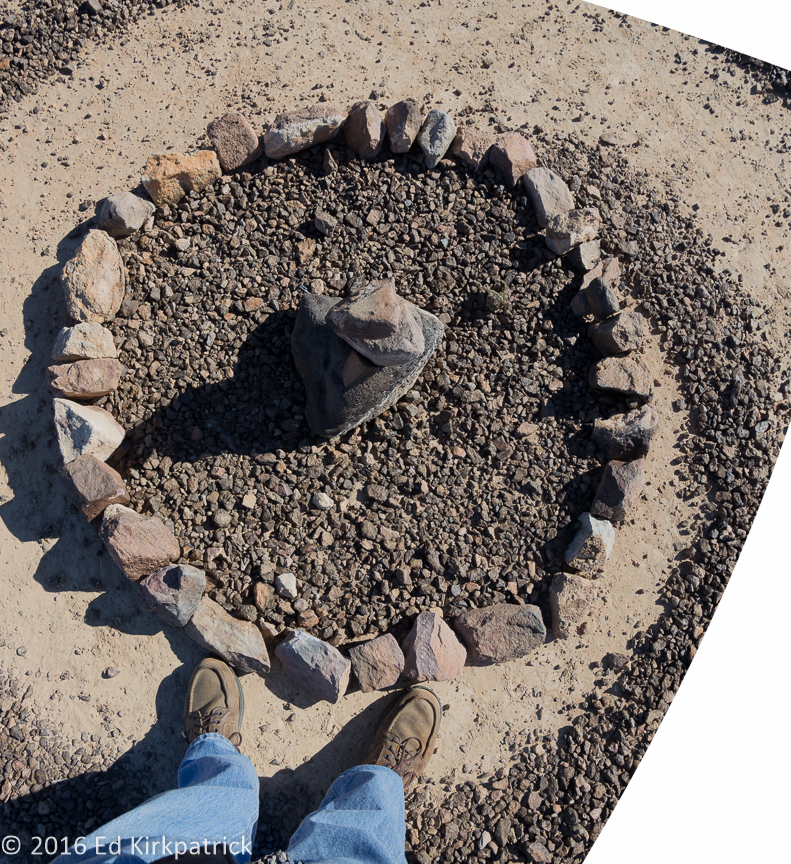 Ed at the center of the universe.  I walked in but took the short way out…

The fence is ugly.  BUT if it was not here ATV tracks would obliterate the figure.  In their defense, these figures are hard to see just walking across the desert.

People say this is a horse.  They are very hard to photograph from the ground and we took a ladder in.

Anybody who knows Ed, knows this is a big adventure for him.  These are the first set of rings down to the bottom of Banshee Canyon.

Marti on the other hand….

Marti looking up at bat caves, we think, in the bottom of Banshee Canyon. 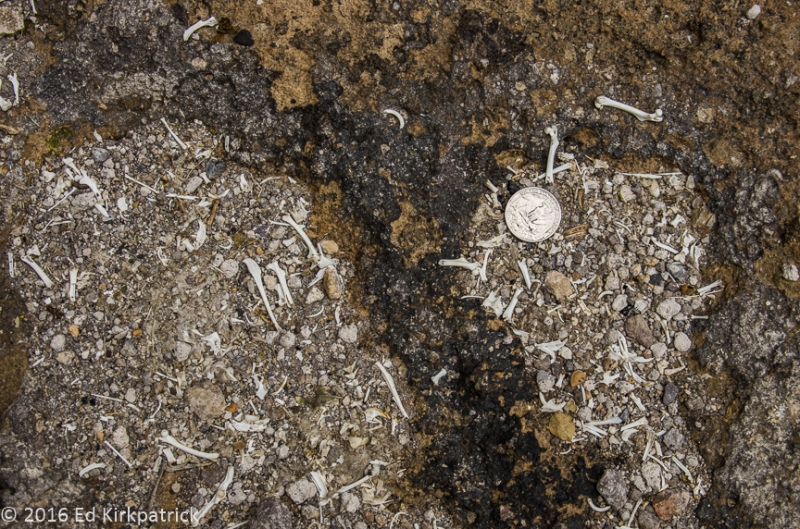 We found thousands and thousands of these little bones scattered around this one section of the canyon below what appeared to be bat homes/caves in some of the holes high up.  Note the two femur bones above the quarter. 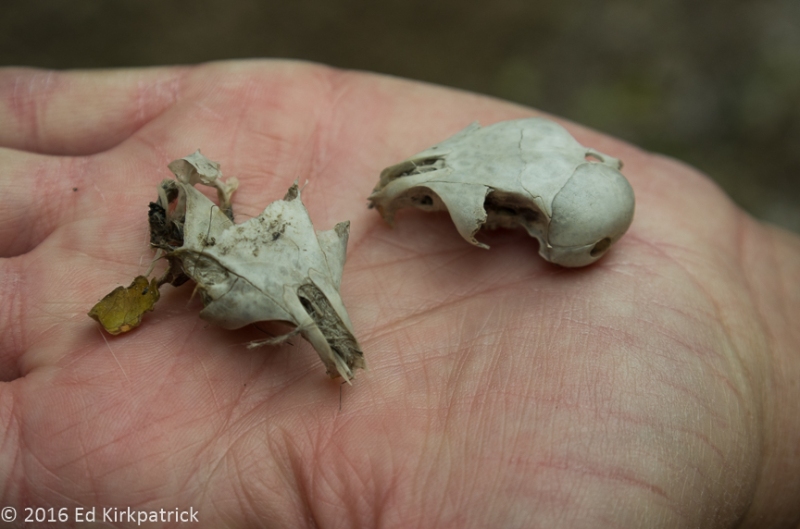 and these skulls were there in the bone yard… Birds? Bats? Lizards? Tourists?  We have to do some research.

From the mouth of Banshee Canyon the valley below.

This crew joined us for our picnic lunch.  11 horses branded with a W inside a square.  Their meal was not what our horses back home get.

The astonishing variety of colors in the lichens on the rocks here is beautiful.  Marti counted seven different colors. An artist’s palette.

Mojave Dawn.  Marti does the before sunrise stuff…

Hole In The Wall Morning.

Directly behind our campsite at Hole In The Wall.