Hello!  I have just finished building a new computer and am in the process of reviewing and culling thousands of photos from over the years. In so doing I came across one that triggered a special memory of a very special day in a special place.  For whatever reason, we never blogged about it, but have decided it was too good not to share even at this late date.

As many of our faithful readers might recall, back on June 21st of 2017 Marti and I arrived in Newfoundland and Labrador, where we spent most of the summer.  It was a glorious time in a beautiful place filled with wonderful people!  This story takes place in the small town of Winterton, off Trinity Bay on the western side of the Avalon Peninsula on Newfoundland’s east coast. Located there is the Wooden Boat Museum which our friend Suzanne, had told us was a must see.  We arrived late in the afternoon on a Saturday, 15 minutes before closing time.  We decided to wait until morning when we would have plenty of time to see everything.  Hoping to stay the night in the tiny parking lot, we asked inside and the two young people covering the museum said they thought it was fine.  Just to be certain, when we saw an older gentleman just coming outside and clearly part of the boat building staff we asked him too.  Typical of Newfoundlander’s friendliness, he laughed and said, “Why not, it’s just a bit of space!”

The next morning, because the museum didn’t open until 10, we went for a walkabout the town to see what there was to see.  I noticed a couple of men cleaning fish down on the docks and so we wandered over.

About then another guy, two kids, and a woman showed up and they were all joking and teasing with each other.  As I love a bit of teasing myself, and as they acknowledged us, I started in with a comment or two of my own. Very quickly, we were all laughing and having a good time!  I asked all about what they were doing and how the fishing was, and like most engagements with folks in Newfoundland, we soon felt very welcomed.  Mike, a big guy, and Ed not so much, had been out that morning on Mike’s boat and caught their personal limit of 5 cod apiece. The woman who had shown up about the same time we had wandered over was Mike’s wife Wanda.  Next thing we know, Mike looks at us and asks if we’d like to go cod jigging?  Immediately I thought no way is Marti going to get in a fishing boat on the open water (she doesn’t like boats of any kind) so I hesitated to look over at her.  To my great surprise, she enthusiastically said “Yes”!  The other man laughing immediately says to us, “You know Mike’s just asking you ‘cause your worth 10 more fish, right?”  Ed (not me, the other Ed) laughing says, “Nah, with Wanda, it’s 15 more fish!”  We didn’t care, this was an unexpected treat for us!!

Wanda, Ed, Marti and I boarded Mike’s boat, which had plenty of room for all five of us, and everyone put on a life preserver as we headed out into the bay.  Did I say it was a beautiful day with calm seas that looked like glass? 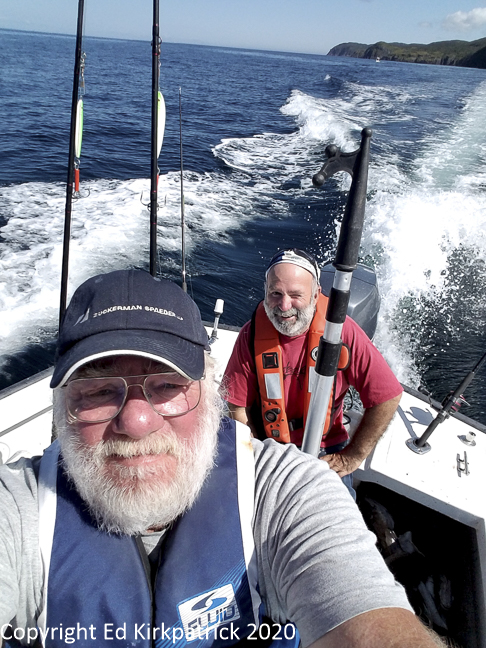 Well, it was and pretty soon each of the three of us was set up with a rod.  Using no bait on the heavy shiny hook, they told us to just throw the line over and let it drop until it hits bottom, about 50 feet down, then reel up the slack.  The jigging is rhythmically and repeatedly jerking ~ jigging ~ the line up a couple feet and letting it drop down again.  While getting the rhythm right takes practice that’s really all there is to it. The cod will hit the shiny hook and you just drag them up to the surface.  They stop fighting very fast, but they are still heavy, and 50 feet is a lot of line.  Mike or Ed netted our catch, slit their throats to bleed them so they taste better and tossed them into the bucket.

With a great deal of laughing and teasing, we got to know each other a bit and in under an hour, we all three had our limit!

Then Mike took us on a short tour of the coast. One place Ed (not me) wanted us to see was a naturally occurring quartz figure “77” in the cliff so we motored over to that spot before heading back into the dock.

Winterton is just inside the cut in the cliffs. 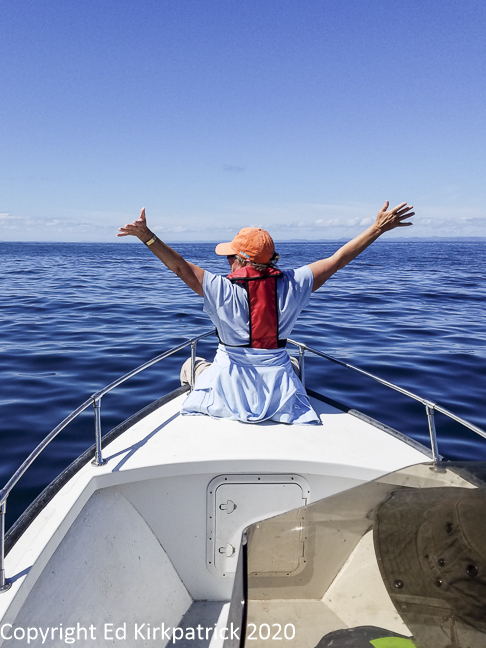 Marti’s Titanic moment! and no sinking was involved.

The 77 is dead center just a little bit above the waterline.

Back on shore, Marti and I followed Wanda’s directions and helped empty and clean up the boat while Mike and Ed went about cleaning and filleting the cods.  Fresh out of the ocean, they were the loveliest snow-white filets, much prettier than the color we see at our home grocery.  Mike and Ed made quick work of the 15 large cods and generously offered us our share, but having very limited refrigerator and freezer space we only take a few filets and some cod tongues. I asked if I could take their picture to commemorate the day while Marti ran to the RV where she put together a small packet of our photo blank greeting cards as a thank you.  All too soon, we needed to say our good-byes & thank-yous for our wonderful adventure with new friends.  Ten miles up the road, I suddenly realized we didn’t get their emails and regretted it tremendously.

The following winter while we house-sat for friends in Maryland,  I had an email from Mike. He had found my website info on the back of the cards and reached out to us with the sad news that Ed had suddenly become very ill and passed away that winter.  Mike and Wanda realized that in all the time of their friendship they had no photographs of the three of them together.  Then they remembered I had taken one and hoped we still had a picture.  I did and was so pleased I could send it to them.

We are good Facebook friends now and surely hope to see them again when we go back to the Rock next summer 2021.  Wanda says the beds are made! 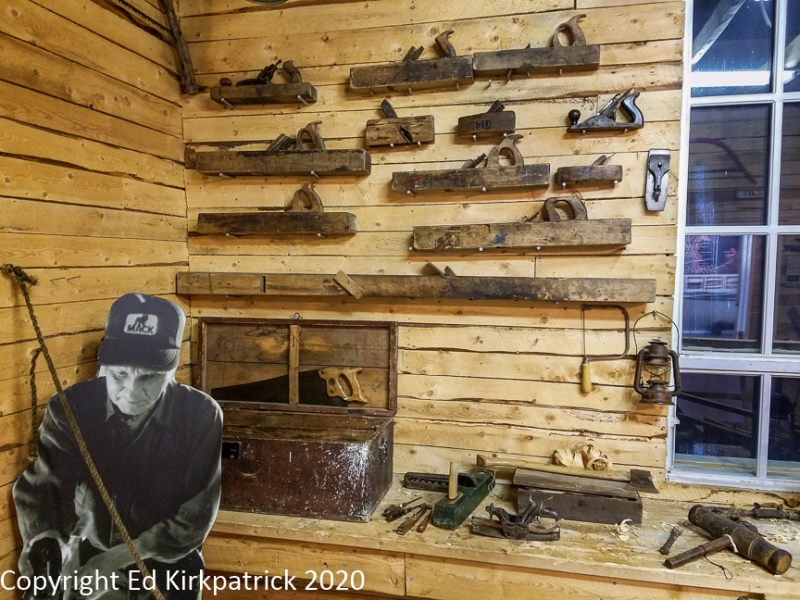 We did eventually get to the Wooden Boat Museum but for some unexplainable reason, I only took this one photo.

Marti and Wanda in transport mode.