No longer caretakers of our beloved Whack-A-Mole Farm, we are now Whack-A-Mole Wheels and periodically we hope to post news and photos about our big adventure.
First here’s some news for those of you who are wondering about our kitty Flea. The new people, Dan, Elisa and son Zack (nice folks who we are very happy bought our farm) were pleased to have Flea stay on with them. After some rather serious demonstrations against his new four legged roomies, (three cats and a Goldie) of his tooth & claw prowess, reports are he is settling down, claimed “his” deck and is trying really hard to adapt and play nice. Phewwww!

We left the farm the morning of Monday, Nov. 17th having moved everything out of the house, vacuuming and wiping it down the night before and sleeping in the RV plugged into the garage outlet for some heat to hold off the 20* weather and wind. Remember the Beverley Hillbillies and Jed Clampett? That was us. We had
shed a lot of things over the last few weeks but there was still no room in the freezer for the vodkas, too many frozen veggies.

First stop was to sister Judy (Ed’s) in Cincinnati to drop off an antique painting of great-grandmother, Lucy Copeland. The drive there was epic. Heading west into the polar vortex cold the temps dropped to the low teens, it snowed on us and the winds were terrific. We had planned to stop somewhere midway but the weather dictated that we press on to Judy’s where we could plug in and run the heat to keep the rig above freezing. Although our water lines were dry and full of antifreeze, there was food and stuff in the rig that we could not allow to freeze. We spent two full days with Judy visiting Cincinnati where there are two fabulous museums to see, The Cincinnati Art Museum and the National Underground Railroad Freedom Center. We also stocked up on Graeters Ice Cream. Thursday we hugged, unplugged and set off to Memphis and Graceland.

Across Kentucky and because of the cold, bypassing the Whiskey Trail (next visit) the drive through Tennessee to Memphis was cold but uneventful. Our primary goal was to get far enough south to un-winterize the water lines so we could shower and make coffee. We arrived in Memphis after dark only to find the last 200 yards of road to the RV park closed by the Memphis police. There was a lighting ceremony at Graceland. After I explained to the officer that we were trying to get to the campground just across from Graceland he let us pass. The next morning sitting at the table outside (it was actually almost shirt sleeve warm) here come two boys about 10 and 12 going into the camper next to us. Nothing unusual about that except both boys were little Elvis impersonators…no, no photos.

On down to Mississippi the terrain flattened out and became cotton fields as far as one could see. We were doing back roads paralleling the Mississippi River and when I say flat, I mean flat, all day long. Pretty in its own way but after a while… So, way down south in the land of cotton the stuff was everywhere; 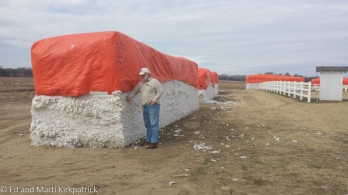 in all the fields, baled up row after row after row, stuck in weeds and littering the roadside and some still not harvested. Cotton was the only thing more prevalent than billboards for casinos all promising riches and joy. Yeah, right. Marti of course has a big handful of the VERY soft stuff tucked into her RV window pocket.
Suddenly, hills started to rise and became very undulating as we approached Vicksburg. The heights of Vicksburg were one of the primary factors making Grant’s life hard in the Spring of 1863. We camped for the night at Grand Gulf Military Park (a little hard to find but very nice and tucked away) and had a nice chat with the ranger there. Both his accent and manner of speech being right out of the Justin Wilson (for those of you who don’t know who he was) TV show. He was friendly and apparently lonely.

Sunday morning we set out intent to make New Orleans by day’s end but first there was the fried chicken buffet for lunch at The Old Country Store in Lorman, Miss. When in the area this is simply not to be missed. We stopped here in 2008 after hearing Alton Brown of the Food Network do a segment on the place on his “Feasting On Asphalt – Up The River” road trip series, check out the story. The best fried chicken you will ever, ever eat and all you can eat, (and greens….yummmm) and will not hurt your pocket book either. We promise!

New Orleans. The Big Easy, Nawlins, NOLA, The French Quarter, Bourbon Street, Cajun cooking, Katrina. After spending our first day walking around the Quarter on our own listening to music,

eating good food, drinking ice cream margaritas, our friend Michael Verderosa who lives here, has his degree in Architectural History from Tulane and is intimately familiar with the place, picked us up. What a fabulous tour we got! First a little drive around the Quarter, then up into the Garden District for our first bar stop (of several) in The Columns a very beautiful, old home, converted into a snazzy small hotel. Back into the Quarter we parked and walked up to “Yo Mama’s” for some pretty amazing burgers and beer. This small place has about 20 seats at the bar and a half-dozen tables. Marti’s burger was the Peanut Butter and Bacon burger, (she believes you’ve got to try house specials) mine, a bacon cheeseburger (I know) was really great. Then we were over to Frenchman’s Street for music and more beer. Mike, at a robust 36, was ready to keep going on but we are older now and put away our party shoes early, so he drove us back to our RV place on Lake Pontchartrain and we said our thank-yous’. It was nearly 10. One more day in the city and we spent most of it at the WWII Museum. Fabulous place and a must do if you are in town. Travel tip…. the Hop On-Hop Off tour bus was a real rip-off at nearly $80 for the two of us and we recommend you avoid it for several reasons. Dinner that night was at the Court of Two Sisters and we had some great Cajun food. On the way back to our campground shuttle bus pickup we stopped in the bar across the street, they have to-go cups, very civilized.