As I mentioned in the last post we were in San Antonio, Texas, but before we got there we had to see “our kids”. So, after a delightful but short visit including the Bastrop Christmas parade with our “adopted” granddaughter Lily (and her mom & dad) we spent a couple of wonderful days with our daughter-in-law Christy in Austin.

We have posted before about Bastrop & Austin and recommend them both, especially Austin. For you RVers, although we avoid them generally, the Bastrop KOA right on the Colorado River is very good if it’s not in flood 🙂 . In Austin while tight and really basic, you can’t beat Pecan Grove RV Park for convenience, but spaces can be hard to come by and they have no website.

Only in Texas would you ride a longhorn steer decorated in Christmas lights. Bastrop Christmas Parade.

West into Texas Hill Country on our way to Fredericksburg via US 290 we stopped at the Lyndon B. Johnson National Historical Park. Actually two different locations, the first is the Johnson City District where there is an excellent exhibit detailing Johnson’s Presidency. The Vietnam War so overshadowed his presidency especially in the end that we tend to forget the amazing amount of good he accomplished. The list of major and important legislation signed by this man is staggering. There is also an exhibit about his pioneering family and their home site is on the grounds. A few miles down the road is the second district, the LBJ Ranch, or as it was called The Texas White House, where we took the house tour. While both places are interesting, if your time is limited I suggest skipping the ranch in favor of the exhibit covering the details of this political giant, in fact it should be on your MVL (Most Visit List).

The Texas White House/LBJ Ranch. The large Live Oak is known as the Cabinet Oak because LBJ liked to hold his Cabinet meetings under it.

Fredericksburg on down US290 is a town of German ancestry and we camped at the Fredericksburg RV Park which was nice. The town is chock-a-block full of shops and restaurants and it’s a fun way to spend a day. I saw a kitchen store right off and we popped in. While they do NOT do online sales, and in fact don’t have a “true” website, Ed & I both agree Der Kuchen Laden is the best kitchen store we have ever been in period!! We were just lusting over item after item we had to have. If you have any interest in cooking, put it on your MVL!

Heading south we drove the short (little over & hour) drive to San Antonio where we stayed at the Traveler’s World Carefree RV Resort. For just a $1.20, the 42 bus stops right at the RV park and runs about every 20 minutes, very convenient for going in to see the Alamo and do the River Walk. Riding the bus as far as W. Crockett St. we walked over to Alamo Plaza.

The Alamo has been declared a shrine in Texas and you are requested to remove your hat and take no pictures inside.  However, they can’t seem to control the local Crockett Hotel sign…

San Antonio de Valero, commonly called the Alamo, was the first Spanish Mission on the San Antonio River. Over the course of time the Alamo became a military outpost and when Mexico declared independence from Spain it remained a Mexican outpost. As Mexican politics shifted from a federalist government with extensive individual rights, to a centralist government the displeasure of those native born to Texas and the emigrants from the United States who were now the majority, began to push back. In a nutshell (you didn’t sign up for a history lesson and it’s a little complicated) this interference with Mexico’s rule lead to fighting and eventually the battle at the Alamo. Against overwhelming odds 212 of the 256 (these numbers are still in dispute) combatants were killed at the siege but the “Cradle of Texas Liberty” was firmly established along with the cry, “Remember the Alamo!”

“The Spirit Of Sacrifice” by Pompeo Coppini 1940

The chain of missions established along the San Antonio River date back to the 1700’s and besides the Alamo, we visited three more of the five. Financed by the Spanish Crown, Franciscan monks served both Church and State. The missions were communities where the Franciscans not only converted the Indians to Catholicism, they taught them the skills needed to build the churches and shelters, to plant the crops and make all other necessities of living a settled existence rather than as hunter/gatherers. They taught them to be good citizens of Spain. Since the 1920’s the city of San Antonio has worked to protect and maintain these historic missions and we found each different from the other and all fascinating. Put them on your MVL! By the way, Mass is still held at all of these missions.

We also spent an entire afternoon and evening wandering all over San Antonio’s famous River Walk. This walk below street level and along the San Antonio River is lined mostly with restaurants. The prettiest, best flood control, save the river, attract business, encourage exercise and well done city park we’ve seen yet! A delight and especially lovely after dark at Christmas time, put this on your MVL! Oh, and when you get hungry from all that walking, Biga on the Banks is very good! 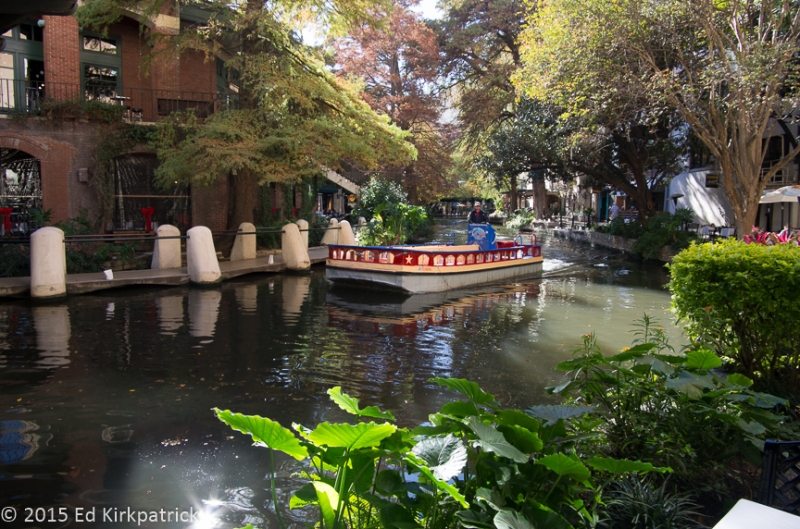 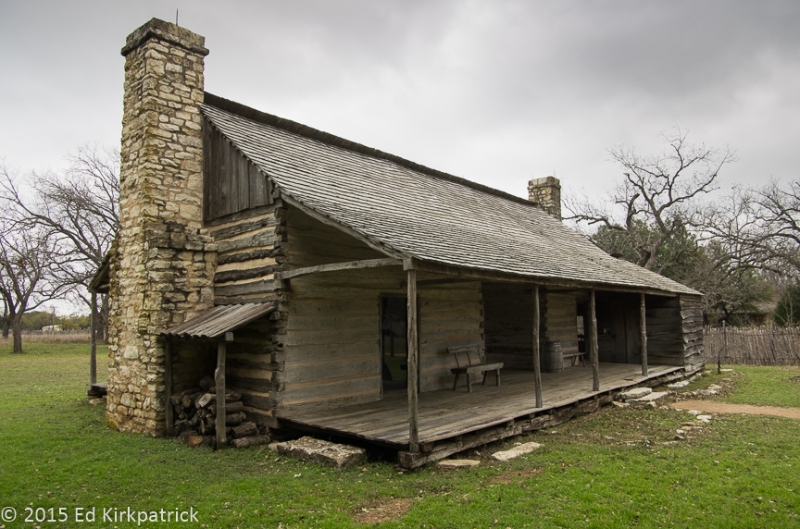 President Johnson preferred this smaller jet to the regular Air Force One.  He called this plane Air Force One and a Half.  There happened to be two other RV’s just like ours lined up in the parking lot at the Texas White House/LBJ Ranch.  We’re on the right. 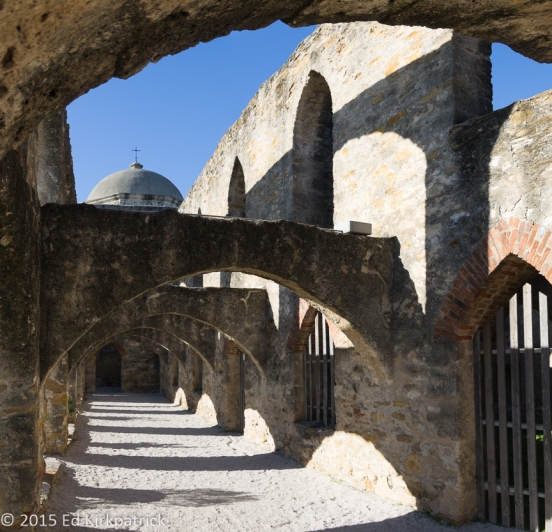 Interior frescoes at Mission Concepcion.  All of the missions were finished in fresco inside and out but few remain.  These are some of the best preserved. 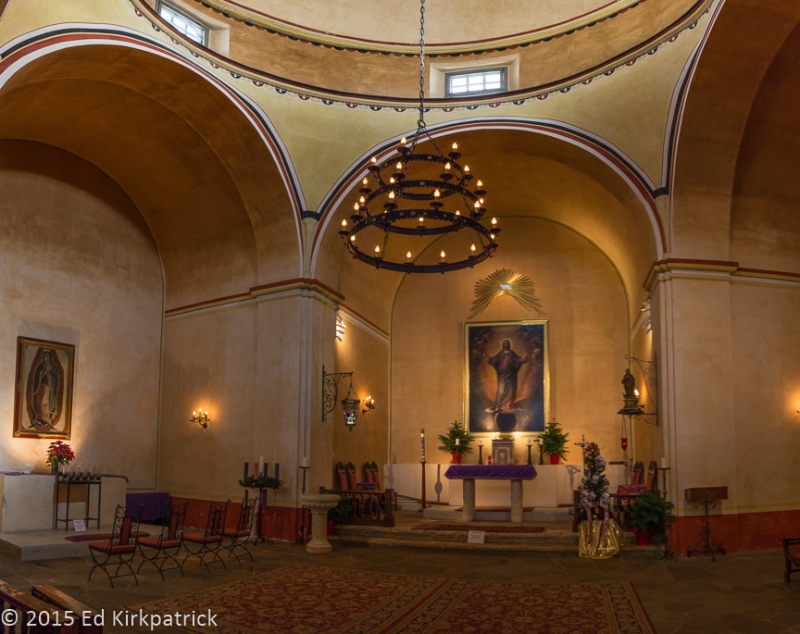 We waited outside Espada while this couples wedding Mass was taking place. 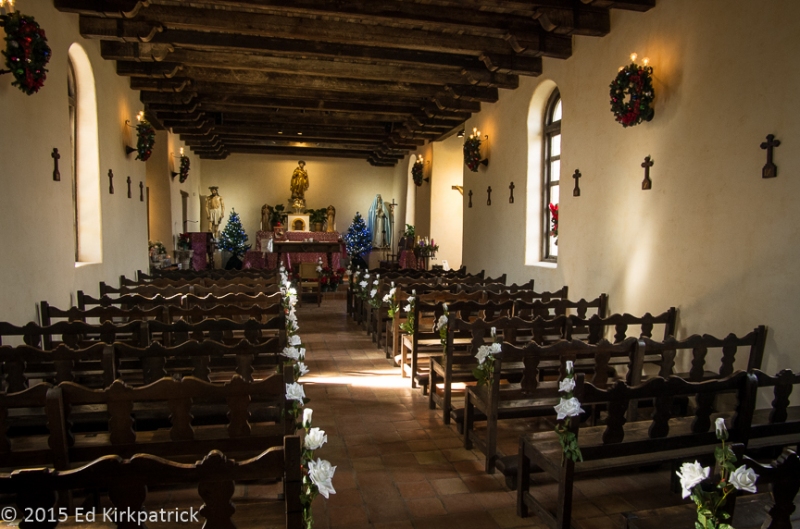 The smallest of the missions is Espada and it is very popular for weddings such as we were lucky to see. 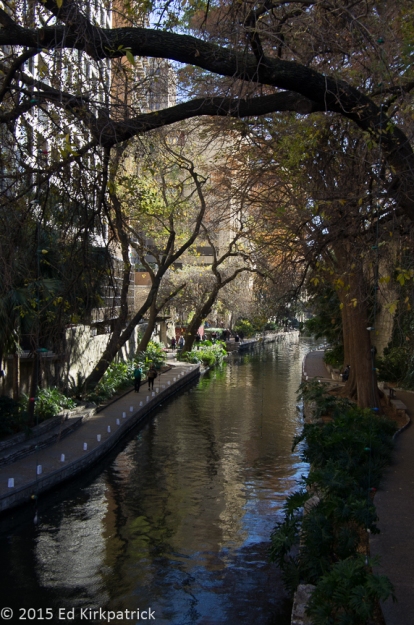 Over 3000 luminarias with real candles are placed along the River Walk for two weekends before Christmas.

Welcome to Texas!  It is a big state…