After a visit back home celebrating our kids first home of their own (a fixer-upper we know will be great when they’re done); checking in with an eye doc about Ed’s eventual cataract surgery and enjoying time with family and friends, we headed north towards the Hudson River area of New York.  With no particular plan other than eventually landing in Canada’s Gaspésie Peninsula, we did a kind of house tour trip as we went.  In the interest of brevity and not really having much to say, we’ll offer up these brief recommendations. 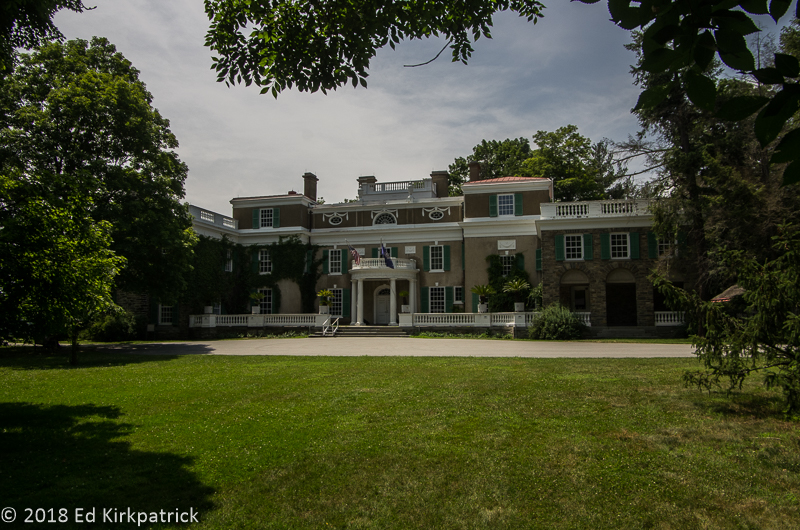 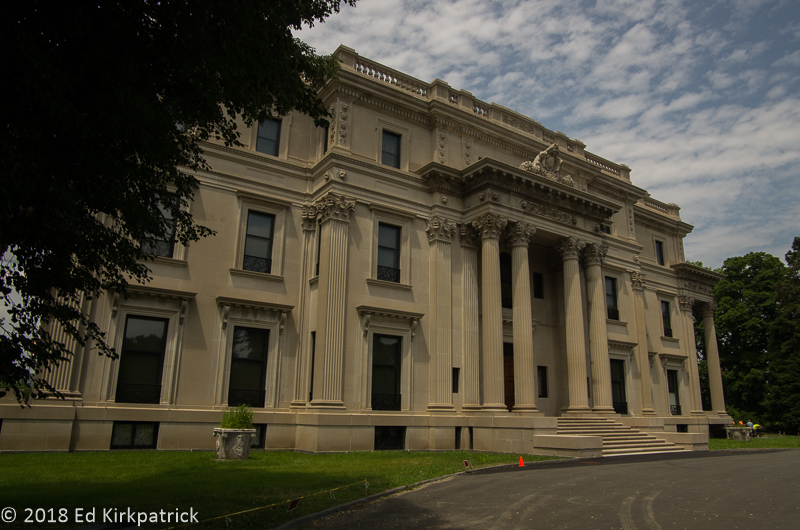 Hyde Park, New York, Vanderbilt Mansion.  The Biltmore Estate in Ashville N.C. is a favorite of ours and it so outclasses this home and gardens that we can’t bring ourselves to recommend this place. 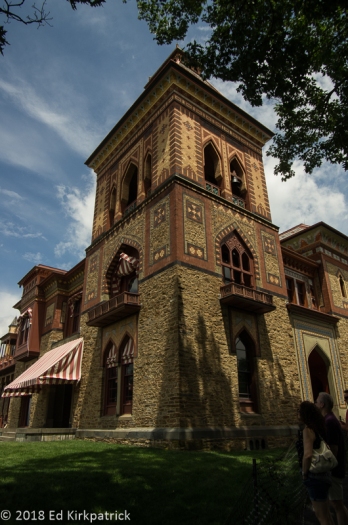 Olana, the home of artist Frederic Church in Hudson N.Y.  Marti recommends highly, Ed not so much on the house but yes on the view 🙂  .

With a thank you to our friend Tim Carmel for the head’s up, Grant’s Cottage in Wilton, N.Y.  Ulysses S. Grant won the Civil War and was a two-term US President but you’ll have to work hard to find the small home where on this bed, this important man died of throat cancer July 23, 1885.  Highly recommended even if New York State doesn’t mark the location on their maps, or bother with a sign on the street!

We also recommend Marsh – Billings – Rockefeller National Historical Park and the Billings Farm &  Museum  Woodstock, Vermont.  All three of the owners starting with George Marsh in the 1830’s were strong supporters of enlightened land management.  The home is lovely and the museum part of the Billings Farm & Museum across the street is very interesting although poorly labeled.  Unfortunately, at the home, we had the worst tour guide we ever had anywhere.

Last but certainly not least, on Lake Champlain in Shelburne VT, watch the cheese making process (an all day/everyday affair) at Shelburne Farms and enjoy a wonderful dinner at the Inn.  Because you only live once, we treated ourselves to two nights here and highly recommend the whole experience.  It’s lovely!

The south shore of the St. Lawrence River runs the length of the northern border of the Gaspésie Peninsula until both river and land meet the Gulf of St. Lawrence in the Canadian province of Quebec.  On the south side, the peninsula is separated from the Province of New Brunswick by the Restigouche River and Chaleur Bay.   As has always been our experience with all the Canadian Border Services personnel, crossing at Fork Kent, Maine was easy. We chatted with the officer about where we were going and how long we intended to stay.  He gave us some direction suggestions and didn’t seem to mind we had no concrete plans. 🙂

The peninsula is divided into sections with descriptive names and we headed north for Sainte-Flavie in the part labeled “The Coast” where we managed to get a tight, unlevel but ok spot on the St. Lawrence River at Capitaine Homard. 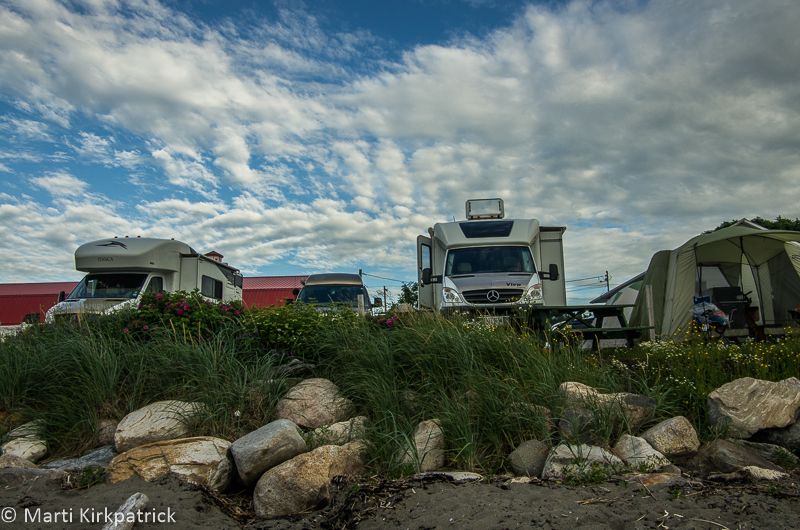 Actually, the view from our View ain’t bad!

Having made good driving time and with our site secured we headed just up the road to Jardins de Métis (Reford Gardens).  These beautiful gardens were the result of Elise Reford’s doctor’s suggestion of less stressful excursion (i.e. instead of her normal fishing, riding, and hunting) following an appendectomy.

Over the course of ten years, Mrs. Reford laid out gardens that complimented the natural flow of the terrain to great effect.

Her inclusion and success with rare and difficult Himalayan Blue Poppies are world famous. And Marti is just a little jealous but isn’t it lovely?

Ed generally likes to travel counterclockwise when doing big loops so we headed south on 132 into the section labeled “The Valley”.  The countryside here is low, steep mountains where after a bit the road also runs beside the Matapedia River.   We took a side road to Saint-Irene where the guidebook said there was a lookout tower.

We don’t know for sure if they are putting it up or replacing it but the picnic table is the top of today’s tower.

And indeed, it is a lovely view.

Upon reaching the south side of the peninsula, “The Bay” section, we headed east on the ring road 132 where the views were to our eye, just water (sometimes) and small towns.

In Quebec, a very Catholic province, most towns, even the small ones have a substantial church.  They are quite lovely.

We stopped for the night at Parc du Bourg de Pabos where a nice bilingual fellow camper helped us get a spot. 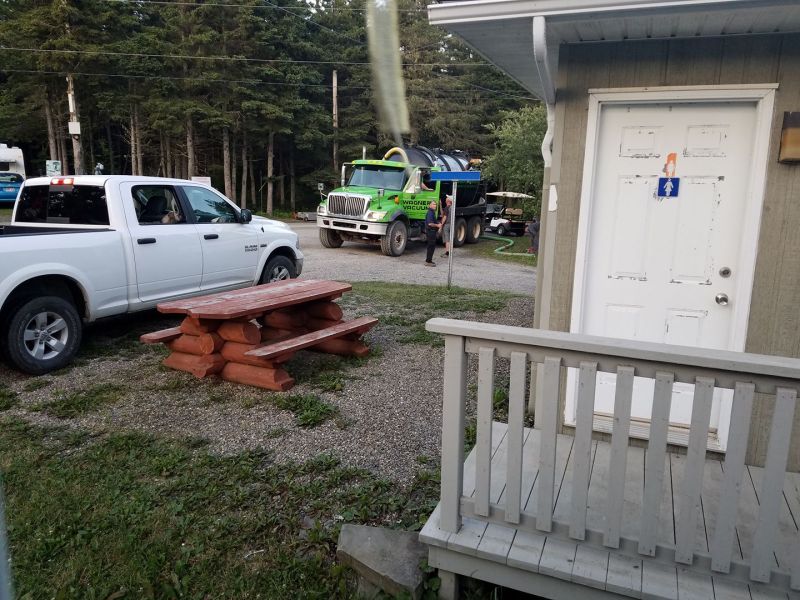 Not one of our more romantic campsites… but it works. It was a Friday and they were having some very serious sewer issues.  The “officials” were there in the morning exploring the sewers out on the road. We left.

Finally in the section labeled “Land’s End” we started to actually see boats and folks playing in the water.

Truth is we are not exactly sure where this is but it is the first time we saw commercial fishing boats of any kind.

At Barachois we stopped and walked the old railroad bridge over the mouth of Rivière-Malbaie. 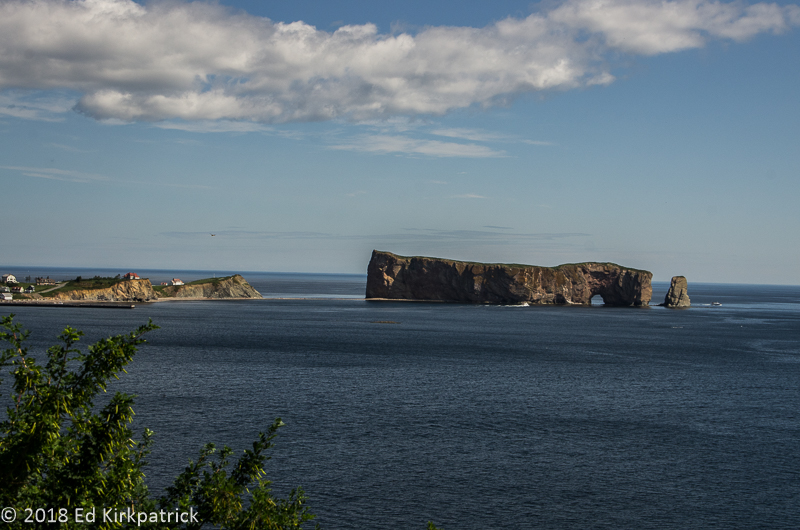 …and then continued on to the peninsula’s main tourist attraction, Rocher-Percé (Percé Rock meaning pierced rock). In 1534 Jacques Cartier reported three arches.  By 1845 there were only two remaining, one of which collapsed leaving the current visible pillar and remaining arch,

The drive from Percé Rock was prettier than anything we had seen so far.  Arriving at the town of Gaspé we sat at the sidewalk tables of Brise-Bise had a very good lunch.

Next day we drove to the north entrance of Parc National Forillon and did the short walk out to Cap Bon Ami.

Continuing west on 132 just outside Forillon we spotted Cap-des-Rosiers Lighthouse.

Built between 1853-1858 at 34 meters tall, this is the tallest lighthouse in Canada.  Officials and citizens are extremely concerned about the very real possibility of it collapsing.

At the very beginning of the loveliest section on the peninsula, “The Haute-Gaspesie” (High-Gaspesie) we stopped briefly at the Cap de la Madeleine Lighthouse. 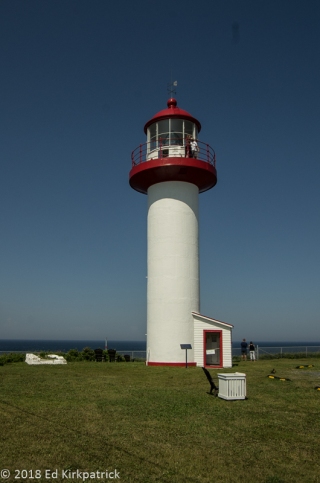 This the latest version of this lighthouse having been built in 1908.

From here the road is absolutely running “between a rock and a hard place” 🙂  For approximately 84 kilometers (52 miles) RT 132 runs next to the cliff face of the Chic-Chocs Mountains and the St. Lawrence.

After Perce Rock, headed into the most photographed and promoted section of the Gaspesie. This section is really fun. 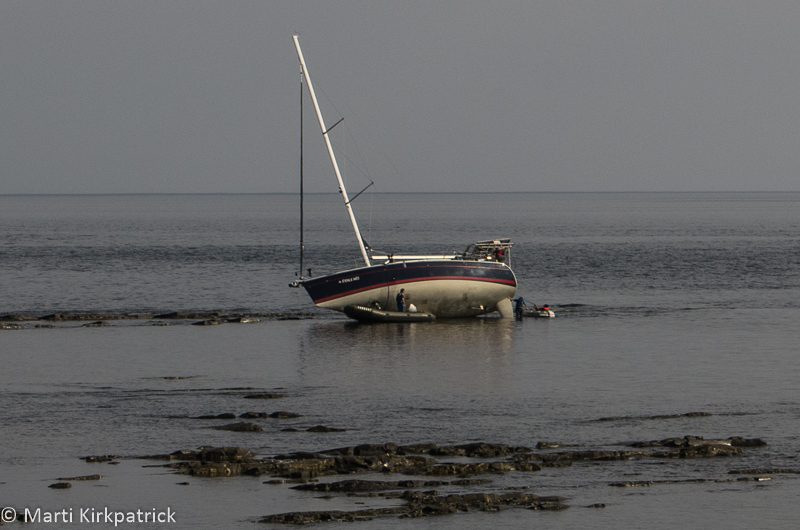 But like most of the peninsula, the waters of the shore are very shallow and full of rocks for a long ways out…  Ruh roh.

A beautiful drive but basically nowhere to pull over to just look.  We did it anyway…

Overall, our recommendation for the Gaspésie Peninsula is weak at best.  Except for the Lands End and Haute- Gaspesie sections it’s just not special enough, although Ed’s photographs may seem to put the lie to this.  The people are the least friendly we have ever met!  Without exaggeration, in the 7 ½ days, we were here 5 people either smiled back, said bonjour/hello or waved when we did any of those things (which we do all the time.)  NONE did so first!  I will say that one on one, almost everyone was pleasant, helpful and/or patient.   Granted they are FRENCH Canadians, but Canada is an English language country. Almost exclusively, no effort is made to include a translation on signs, labels, menus, directions, anything, and it does complicate things.  Although, we both are getting better at figuring words and meanings out.  True disclosure…I went from an A to an F in 7th-grade French class!  I commented to Ed several times that coming from a country where everything seems to have English/Spanish (or more) on it, these folks sure don’t seem to want to be inclusive 🙂 . We, me especially, found the experience exhausting and it colored my whole outlook.  So, after a night of conversation and wine, we decided to head for the ferry at Matane to cross the St. Lawrence and see what was on the north shore and beyond.

Evening at Capitaine Homard.  The fog was a constant companion. 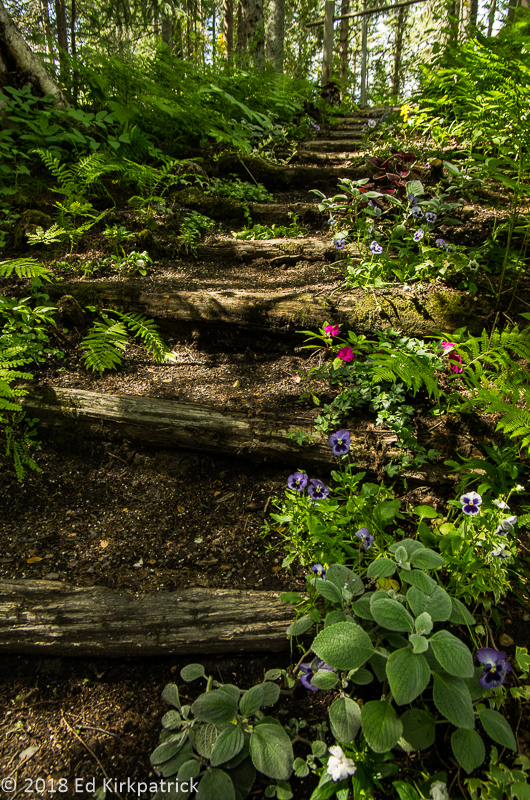 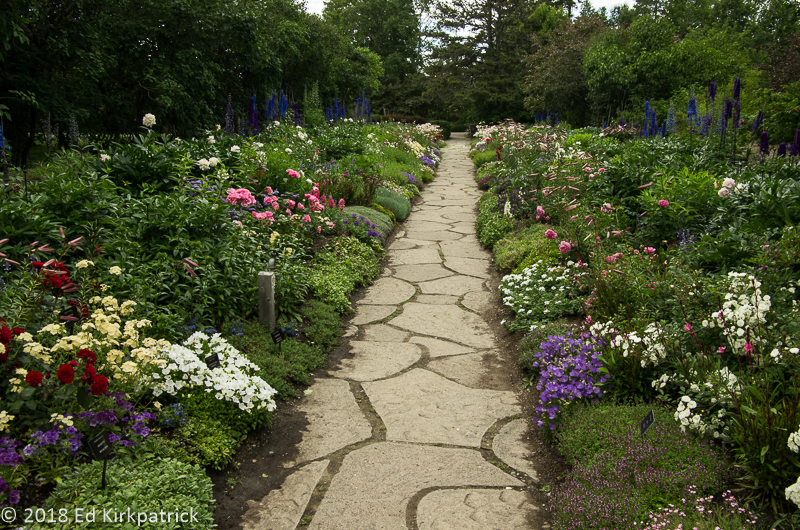 This section of the garden is called The Long Walk…  It smelled really good too. 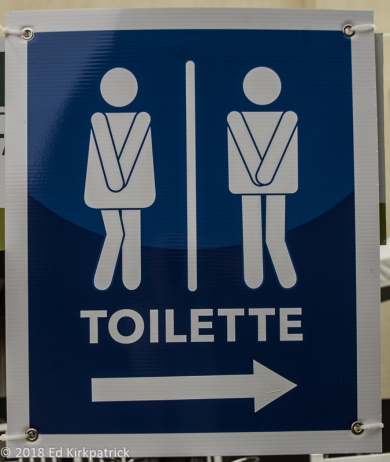 They may not offer the English words but the signage is quite clear.

As we have commented, the mountains are very steep and we encountered grades between 8% and 16% everywhere.  They weren’t long but they were constant in the interior particularly and we loved this sign.

The amazing thing about all these hills and mountains is that on top there was this wonderful expanse of rich farmland where crops such as mustard, grains, corn, alfalfa, and cattle were healthy and lush. 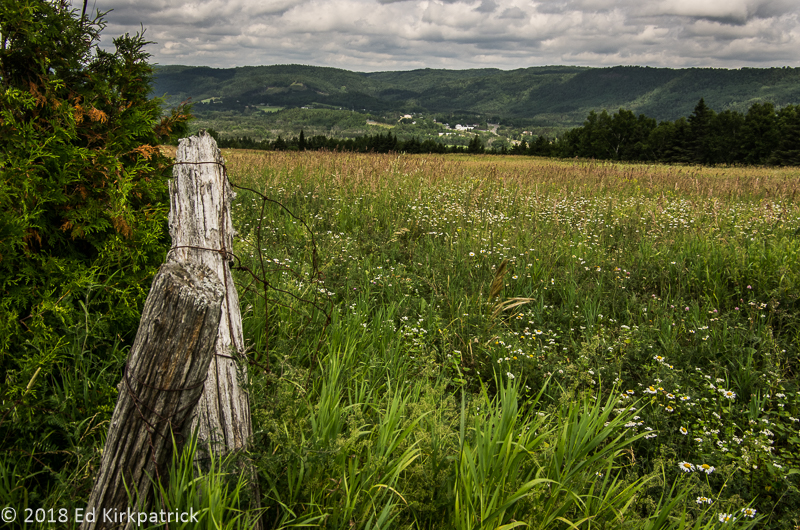 And then there were fields lying fallow.

Almost all of the small village churches followed this same basic design with a tall sharp steeple.

Perce Rock.  At low tide, people can walk out to it but there are many signs warning of the frequent and deadly rockfalls sliding off the rock face.

Hugging the cliffs and staying out of the water it really is a fun drive through this section, the Haute-Gaspesei.

“Lions, tigers, and bears… oh, my!” Nope, Along the Haute-Gaspesie road. Rocks, Waves, and Avalanches… Oh, my.

7 thoughts on “Gaspésie Peninsula ~ WITH, a short home tour in NY & VT”