Hello! Thank you all for bearing with us and our summer long disappearing act. We are thrilled to say Ed’s surgery went well, especially considering after the fact when the doctor told us he had been pretty worried! As they say, all’s well that ends well. We did however receive the sad news that our kitty Flea passed away. He had a good life and thanks to the kindness of the purchasers of our home, he got to stay on the farm he loved.

Ed did some repairs and upgrades to the RV, I gave it a good scrubbing inside while he did the outside and we hauled all the stuff we’d moved into the apartment back into our little wheeled house and we headed out on September 22nd. Going up 15N into Pennsylvania over to Lewisburg where we picked up Rt 45 and then 322N driving through beautiful farm country to State College. We stopped for the night in Woodland, happy to be back on the road.

A beautiful, pristine round barn near State College, PA. Don’t see these often.

We were headed for Costello, Pennsylvania in Potter County where my Dad was born so I could say “hello” to my great grandparents Robert & Janetta Campbell Deppa.

Robert came from Scotland when he was 8 and fought in the Civil War figuring as did many that when the North won he would then be a US citizen. Not so. After the war he also married Janetta who was all of 15 and a half. She is also for whom one of my nieces is named. We had been to the cemetery back in 2001 and it was overgrown and a mess. Volunteers have now cleaned it up and it looks lovely, although they also changed the name after well over 100 years.

Fern Woods in the Pennsylvania mountains…

From there driving on up into New York and many small towns on our way eventually to the Peace Bridge crossing into Canada and the QEW (Queen Elizabeth Way) towards Toronto and on past to Alliston, Ontario. We have noticed before that small towns in New York are generally very clean. Folks seem to take pride in their homes, yards and towns no matter how poor they might be. It’s nice.

An old truck at the cranberry farm.

We poked around Ontario for a couple of days. Stopped at Johnston’s Cranberry Farm where we sampled their cranberry and blueberry wines, won’t need to do that again. We drove to Penetanguishene just because a town with a name like that ought to be visited and had our first poutine (French fries and cheese curd covered with gravy) at the “World Famous Dock Lunch”; nope on both counts.

Went to the French River because in elementary school when we were taught about Canada the only places I remember being mentioned were the French River and the St. Lawrence River/Seaway. At the French River Provincial Park visitor center there is a 512ft. long, 12ft.wide bridge built 90ft. over the French River for and by snowmobile enthusiasts! They take their winter entertainment very seriously 🙂

We hiked the one mile wooded trail to the Rocellet Falls. The rock of the Canadian Shield creates a sidewalk thru the woods, except for the spots where the tree roots unable to penetrate the shield and clinging to what dirt is available, make an ankle-twisting maze. It was a lovely walk and the falls are very pretty.

We visited our dear friend Beverley at her sister Wendy’s cottage on Deer Lake in Sundridge and had a wonderful time. 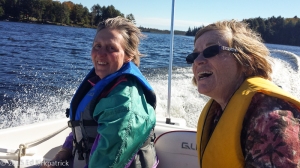 Marti goes for a boat ride on Deer Lake with our friend Beverley. Fraser was Captain and Wendy was Co-captain. I sat in the middle for balance.

They took us on a boat ride and out to Burk’s Falls see the Screaming Heads. Concrete castings about 16 feet tall scattered across the landscape, these heads, hands and rearing horses are odd and fun. There were also many large to huge metal bar pyramids and a few geodesic domes throughout the place. Oh, and a giant string web in the woods!  One of those “you gotta see this” places 🙂 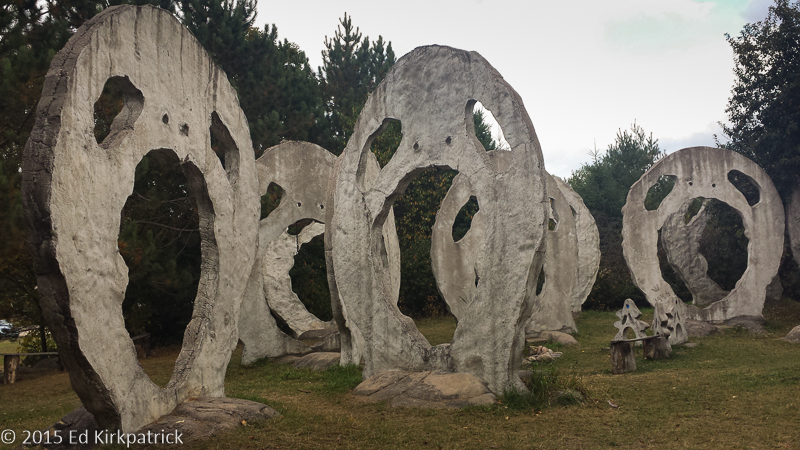 After Ontario we headed to Quebec and Quebec City. This is a major MVP (Must Visit Place)!  We stayed across the St. Lawrence at the Campground Transit and took the short Levis Ferry ride across to Old Quebec City.

On the ferry from Levis…

If you can’t make it to France, this is the next best thing. Founded in 1608 by Samuel de Champlain this walled city is incredibly beautiful. With a commanding view of the river, the French, who finally lost it to the English in 1763 and the Americans who could not defeat it and so ensured that Canada would belong to England, the city is proud of its history. Inside the original walls it has such a European feel and with the population still speaking French we felt we must have traveled a lot farther than our odometer said (even in metric). We spent two windy days wandering around and will be back for sure. Plus, there’s this amazing, not too expensive, attic condo in the heart of the Old City that is calling my name….. 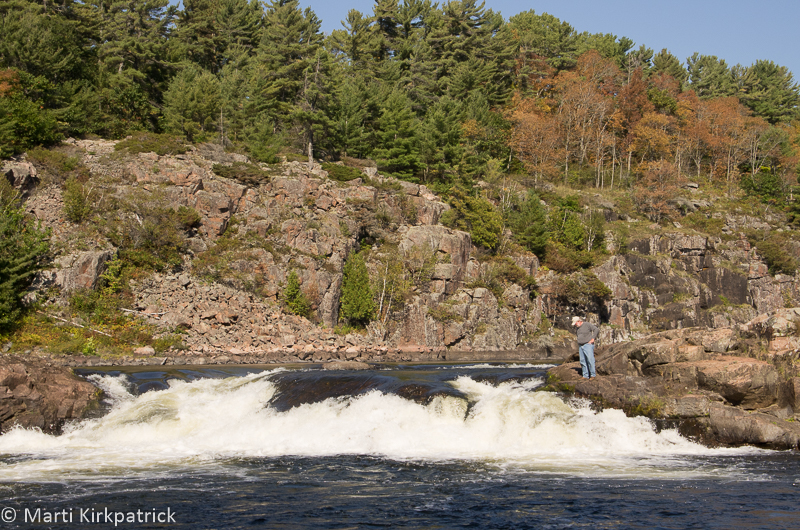 The big falls at Recollet. 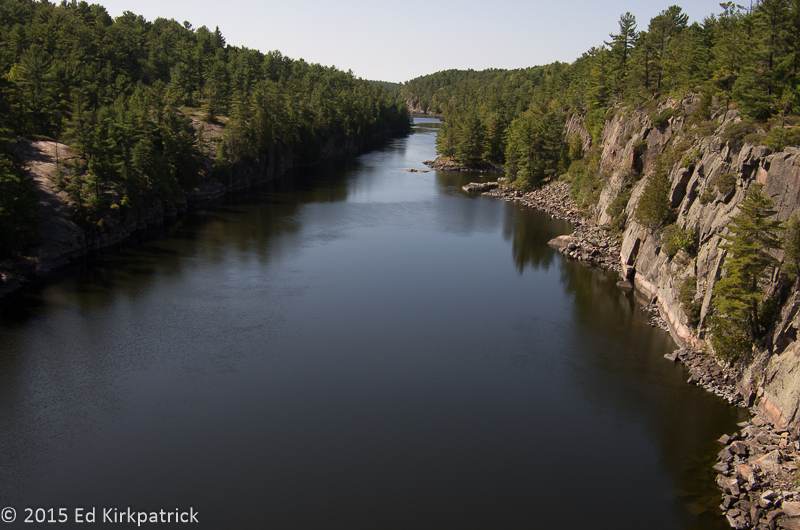 French River from the bridge. 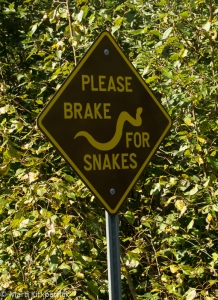 These signs were all over Ontario back roads… 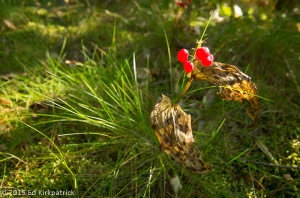 Berries of some sort on the trail.

Canadian maple leaf and some sort of “shroom…

Horseshoe Lake in Alliston Ontario with a Blue Heron….

The Screaming Heads place at Midlothian

Ed piloting the hand pulled ferry at the Screaming Heads. 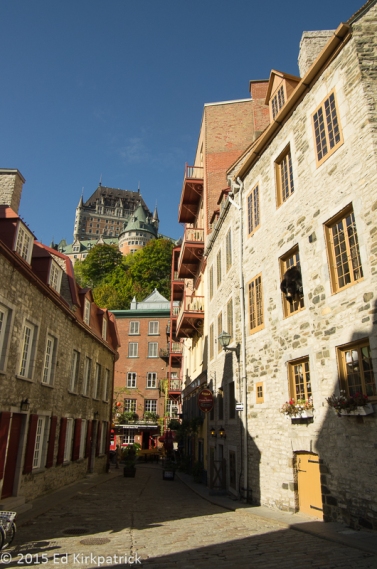 The Funiculaire du Vieux-Québec runs up the cliff to the Frontenac in the Old Quebec neighborhood of the city. 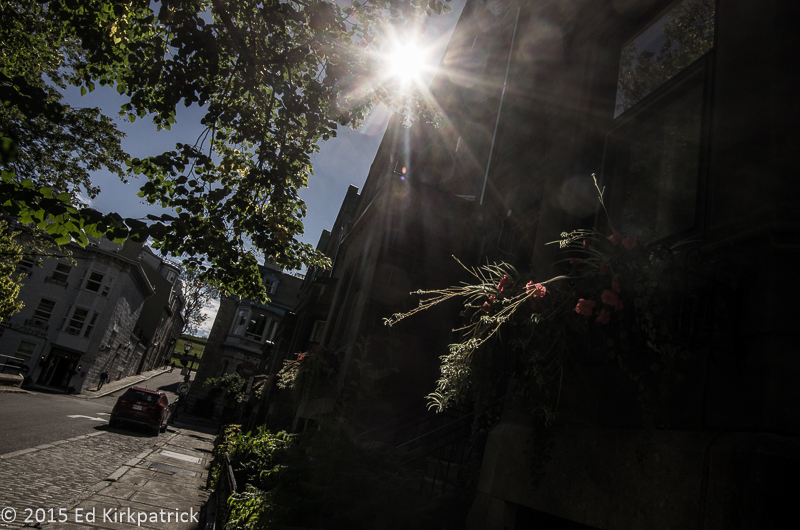 Croissants and coffee at Le Maisson Smith each morning on the square at Palace Royale. 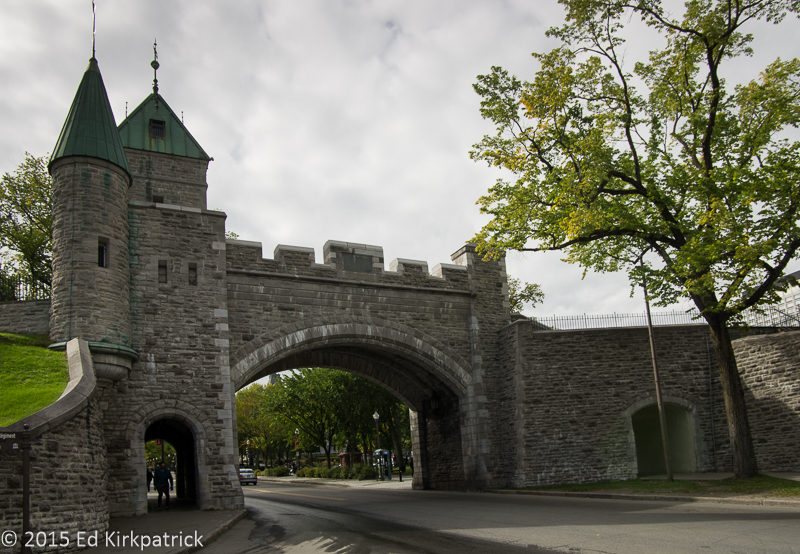 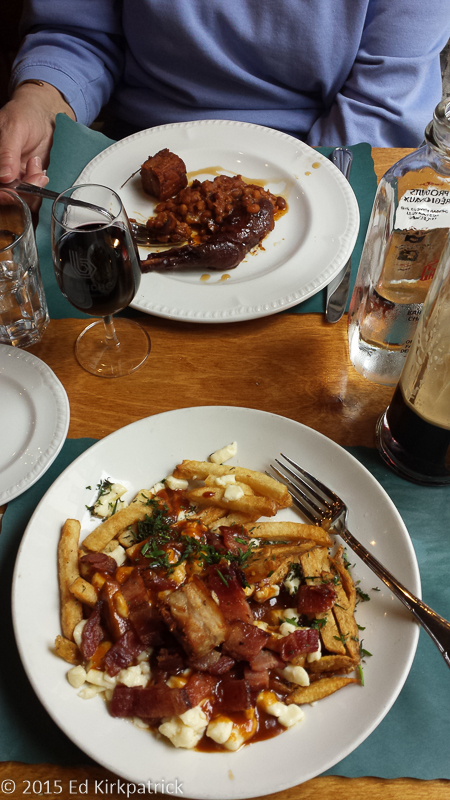