Taking US190 towards Jasper Texas, on our way to San Augustine and Mission Dolores Campground for the night, we actually crossed the Sabine River from Louisiana into Texas!  For the last several years we have had to take a very southern (and sometimes very convoluted) route because the Sabine River regularly floods and shuts down all kinds of crossings including Interstate 10! 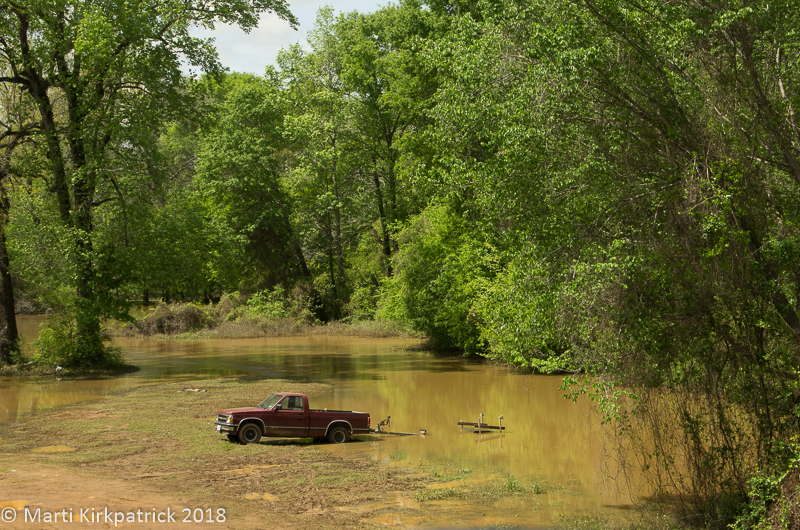 We had our usual chuckle about how to know when we’ve entered Texas…the speed limit on that little 2 lane road we’ve been tootling along on at 45 or 50 jumps to 75 miles per hour 🙂 . Yeah really.

Spring wildflowers blanketed the sides of the roads and out across green fields of cattle reminding us once again how pretty east Texas can be this time of year.

We stayed with State Rt. 21 the whole way to our destination of Bastrop (we’ve posted about Bastrop before) and recommend this route to any of you coming to Texas for say, Austin.  There’s not to much traffic, some cute towns, Nacogdoches in particular and especially in the spring it’s pretty countryside.  It will also allow you an opportunity to stop at the Caddo Mounds State Historic Site which to our great surprise was open on Easter Sunday!  The small museum doesn’t have a lot of artifacts, and what it does have are replicas, but there are good representational murals and structures.

Replica of a Caddo Indian Lodge.  The structure is amazingly sturdy and the mound in the distance is the burial mound.  There is also a ceremonial mound and a borrow mound scattered across 15 acres of open ground.  The site was abandoned around 1300AD.

We have been to Bastrop quite a few times but never stayed at the South Shore Lake Bastrop Campground until this trip.  Very busy on weekends and during the summer, arriving late on Easter Sunday, we found it almost empty, While level is an issue, we do recommend it for inexpensive, private, quiet sites and good shade.

We also recommend the Bastrop Discount Tires store where we got 6 new Michelins put on the rig.

We had a few days to kill before visiting with our daughter-in-law in Leander and back to Bastrop for a visit with our “adopted” kids there, so we headed for Fredericksburg west of Austin on US290.  We have been here several times before so wanted to do something different.  Staying at Lady Bird Johnson Municipal Park Campground just outside of town and RIGHT next to the airport which was quiet at night, we recommend only the Horseshoe Loop which was much less cramped than most of the campground.   We went to the National Museum of the Pacific War over the course of two days.  Admiral Chester Nimitz was born in Fredericksburg and there are several things to see pertaining to him and/or his family.  The huge and excellent George H.W. Bush Gallery is the only part we did and it involves a tremendous amount of reading.  Folks who have gone to museums with us know that Ed reads almost all and I do read all of the descriptions, so we don’t move along fast 🙂 . We do recommend you hold out part of two days (can’t take it all at once) and put this on your MVL (Must Visit List).  We also suggest you put the Buffalo Nickel Bar & Grill on your list for lunch, one of the best burgers ever and the buffalo chili is pretty darn good too!

In previous trips, I had always noticed signs for Enchanted Rock when passing through this area so I said let’s go see what it is.  Just 18 miles north of Fredericksburg, Enchanted Rock State Natural Area is worth the trip! The largest pink granite monadnock in the United States the climb to the top while steep is not difficult.  (A monadnock is an isolated large rock or small mountain hard enough to resist the erosion that has weathered away the softer surrounding rock. For you folks back home, our Sugarloaf Mountain is a monadnock)

Beginning of the hike up Enchanted Rock. The Summit trail climbs 425ft. in .6 miles to an elevation of 1825ft. 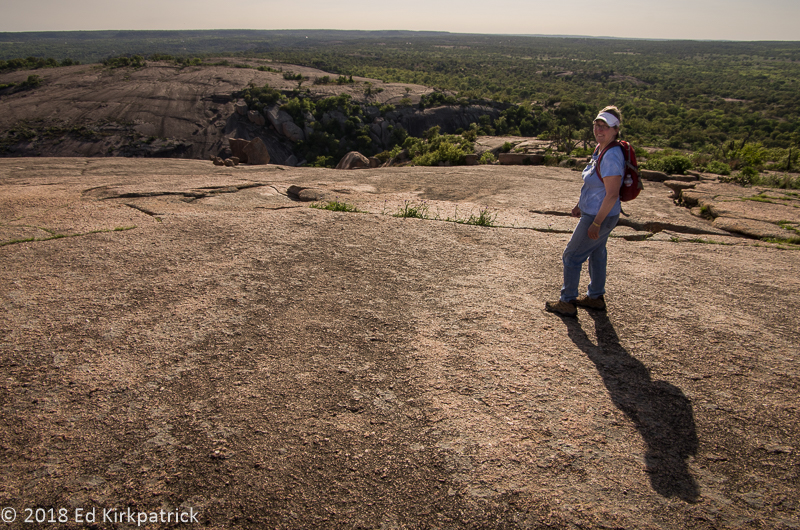 The Texas Hill Country all around down below.

I had noted on our map Longhorn Cavern State Park, so on our way to Leander, we took 281 passed Marble Falls to Park Rd which has some serious and unexpected (but fun) DIPS so if you’re in a big RV or travel trailer especially, watch out!  Way back when the dinosaurs roamed the earth and Ed and I didn’t know each other, we both did some caving and so we like to take a look when the opportunity presents itself.  Longhorn is not worth a special trip but if you’re in the area do stop in. 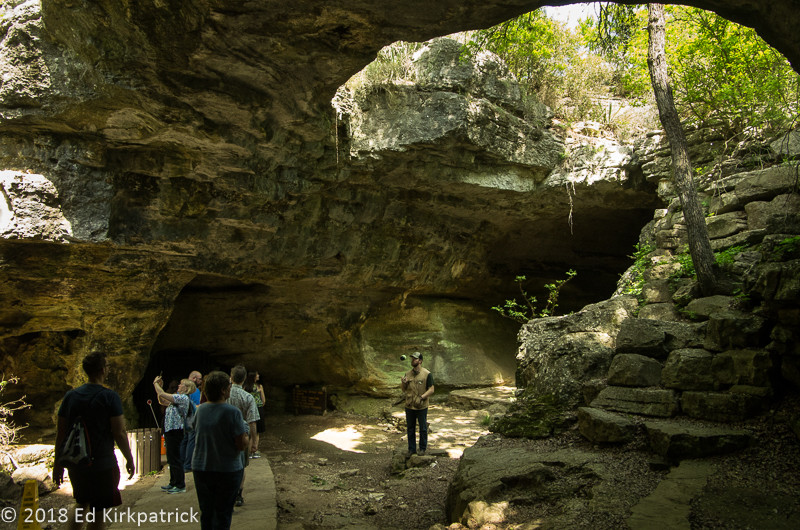 Extensive work by the CCC (Civilian Conservation Corp) in the 1930’s opened a great deal of this cavern to the pubiic.  They wheelbarrowed out tons of mud and rock. 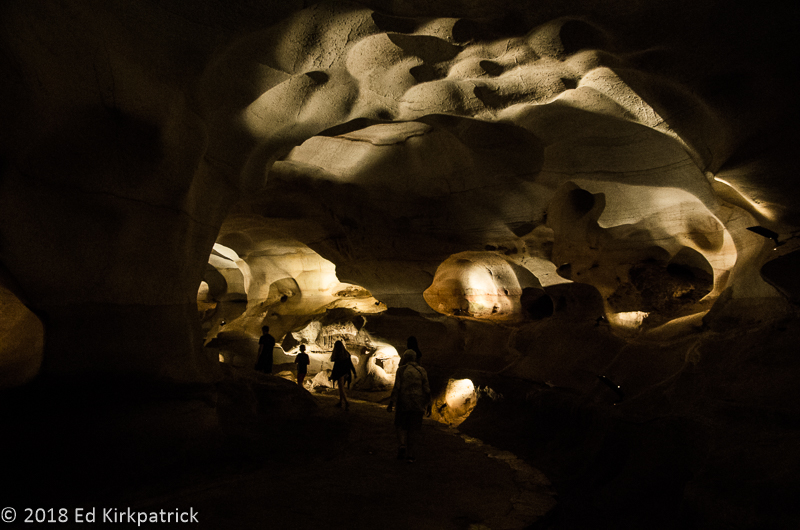 This section is in Dolomite rock and worn by an ancient river.

After our visits with family we set out for a couple of days at San Angelo State Park to do chores (taxes) and so we could visit the San Angelo Museum of Fine Art.  Turns out they were closed for an installation!  I told the young man we had come specially to see them… from Maryland no less!  He took pity, asked his boss, and he kindly let us in to see their small permanent ceramics room.  Proof, be nice to people and more often than not, they’ll be nice back 🙂

Looking back at the Fine Art Museum across the Celebration Bridge over the Concho River in San Angelo.

One of our favorite pieces, a ceramic teapot by Anthony Bennett.

A number of years back we stopped at Balmorhea State Park for the night and it was so windy and cold we did not go for a swim.  This time Ed had checked the weather and said let’s go, and I am so glad we did!

The CCC built the pools around the natural spring between 1936 and 1941.  The spring has a constant flow of 22 to 28 million US gallons per day at a temperature of 72-76 degrees and is as deep as 30 feet in places.  There are small native Pupfish which are endangered and the rascals nibble on your skin but it doesn’t hurt.

Another arm of the pool and Marti swimming.

After our dip, we headed for Fort Davis via 17 which is at the end, a very pretty drive.  We have been to Fort Davis before and I especially like the area.  It’s desert, but also because of the elevation has enough grassland to successfully ranch and pretty mountains to hike.

Early morning in the Davis Mountains outside Fort Davis.

There’s also an “upscale” and more importantly the only full bar restaurant in town called Blue Mountain Bistro where we had a very good, three-course meal prepared by a Vermont based visiting chef!  Yum. The next day we headed for the McDonald Observatory where every Tuesday, Friday and Saturday they offer their very popular “Star Party” with talks, telescope viewing and constellation tours. I had seen that they were completely booked for that, but we could still do their daytime tour and solar viewing.  It was VERY windy, 70 mph gusts, and consequently, they did not open the roof of their solar telescope. However, a very engaging and intelligent young woman gave an informative talk/powerpoint about the sun with live images from telescopes based around the world.  She then led the tour to their 3 big telescopes.

McDonald Observatory Visitor Center. Note the haze which is dust from the valley to the west stirred up by the 50-70mph winds.  No astronomers were going to open the big domes this night but we did get to look at the Whirlpool Galaxy from the 22-inch telescope in the near dome during Star Party when the winds had subsided.

This is the Hobby-Eberly 10-meter telescope dome on top of Mt. Locke at the McDonald Observatory.

AND the really fun bit… 3 reservations canceled, so we got to stay for the Star Party!  Lots of FUN with some very bright folks…..and the night sky…..WOW!!!

We are currently in New Mexico and will soon be inviting you to join us underground in a truly magical place!

The interior of the Visitors Center at Caddo Mounds State Historic Site. 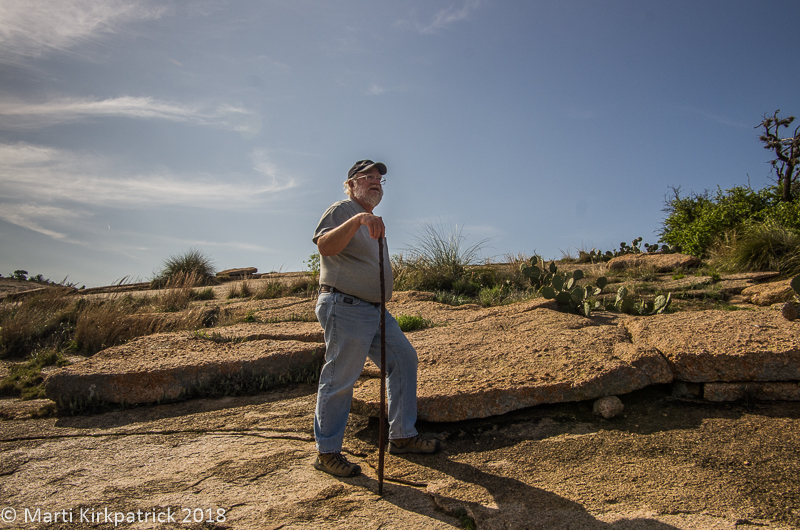 The vernal pools on top of Enchanted Rock are teeming with tiny Fairy Shrimp and algae.  You have to look closely but once you see them they are squiggling everywhere.

Tradescantia and grasses etc grow in the moisture caught in the cracks. 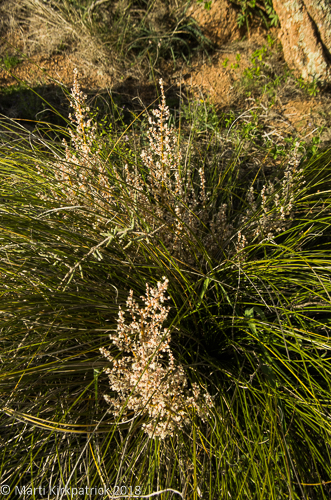 Pure crystals of Calcite growing on the walls of Longhorn Cavern.  The cavern got its name because local cattle would wander by and fall into holes into the cave and their bones were found once the cave was discovered and explored.

More fun ceramics. The lady is about three feet tall.

Along Rt 17 heading down to Fort Davis these Aoudad or Barbary sheep are imported from Morocco and North Africa nd doing very well where the Bighorn Sheep have failed.

The 107-inch telescope.  Nobody peers through an eyepiece anymore.  All the viewing is done on computer screens collecting light for spectrographic analysis. Galileo would be very jealous.

Blue Origin’s Space launch facility north of Van Horn Texas. We think the assembly building and launchpad are under the red arrow on the left but Jeff Bezos was not giving tours that day.

And lastly, bye-bye from Texas!