Forty-four Junes ago Ed and I went to Nova Scotia for our honeymoon staying in Halifax for five nights.  Even though we didn’t get off the southern hard coast much, we loved it and always wanted to come again. Now, after all these years we have made it back. However, having never seen the icebergs in Newfoundland, we decided they were a priority and not having a good idea about how long into summer they last and knowing we have to pass back this way, we cut our visit here short. So, we jumped onto the Trans Canada to circle Cape Breton on the way to North Sydney and the ferry, but I am getting ahead of myself…

The first thing we noticed is the red dirt of PEI is gone but still pretty.

Coming into the province from New Brunswick on the Trans Canada Hwy 104 we took 302 just outside of Amherst over to 242, the scenic route heading for Joggins Fossil Cliffs.  Large seams of coal were the big draw here starting back in 1686, but the fossil record of the 310 million year old rainforest ecosystem is what earned the cliffs a UNESCO World Heritage Site designation.

A nice example of Stigmaria, fossilized tree roots of a lycopsid tree.

Running back on Collector Highway 242 to 320 and then Trunk Highway 2 we drove through huge hills or perhaps little mountains covered with forests with a lovely mix of conifers and deciduous trees.  As near as I can figure it, “collector” is like our general route, “trunk” is like a county route, provincial is equal to state and then there’s the Trans Canada which even though the number changes is equal to our interstates.

The lighthouse at Five Islands Park.

We were headed to Truro to see the tidal bore created as the Bay of Fundy tide flows up the Salmon River.  A tidal bore is created when the incoming tide flows into a narrow river or bay of out flowing water with enough force to create a wave.  Depending on the size of the tide, as you probably know they vary with the moon, season, and wind force, a tidal bore maybe several inches or many feet tall.  While not an overwhelming sight, it was still very cool to watch and see it roll up the river past us.

We drove to Whycocomagh Provincial Park where we were practically the only folks there. Having arrived with lots of daylight to spare we headed out for the ferry at Little Narrows.

This is a cabled ferry but not like our White’s Ferry boat at home, the Gen. Jubal A. Early.

For $7 we crossed and headed off on what the map has marked as a scenic route and a place called Washabuck Center.  Who could resist?  We didn’t know for sure where we went but it turns out there are also Upper Washabuck and Lower Washabuck and somewhere in the middle is perhaps the worst road we’ve ever been on!  A car passed us at one point and you should have seen the shocked look on the driver’s face when he saw us in our RV!  We survived and so did Whack-A-Mole Wheels 🙂 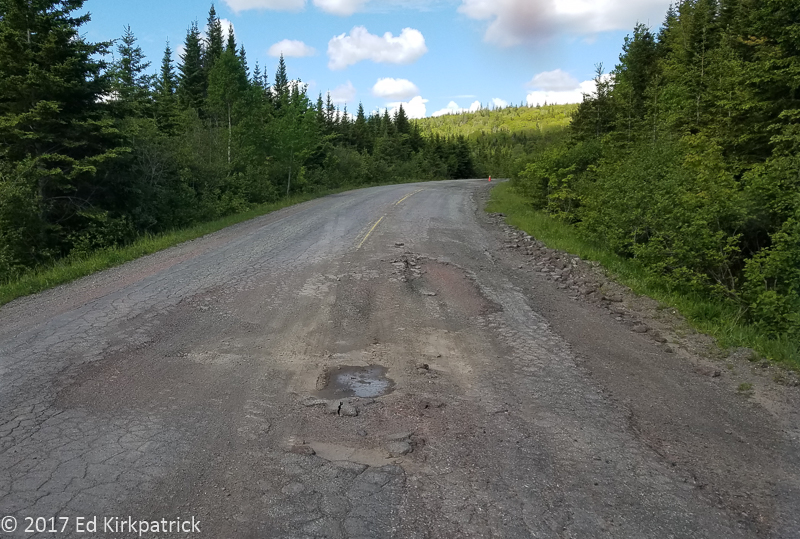 This is before the road really got bad and we have since encountered much worse.

NOTE: Fellow campers, we have stayed in a growing number of provincial parks which range from dry camping to 3-way (water, electric, sewer) sites and most are very nice. Be sure to check them out.

The Cabot Trail around Cape Breton Highlands National Park of Canada is a world famous drive and with good reason.

The Highlands, as they are called, are an extension of the Appalachian Mountains and a plateau.  The interior holding no roads or development and very few trails is a wilderness.  This is the Aspy Fault which was created in the Ordovician period when two continental plates collided forming the Appalachians.

We headed north to do the route counter-clockwise planning to catch the ferry to Newfoundland at North Sydney on the eastern side of Nova Scotia.  From the road we spied the Calvin United Whale Cove Cemetery on the hillside at Margaree Harbour and headed out the dirt road for a look.

Just bury me here because this is the view…

behind to the left…

and behind to the right.  Look how pristine the water is.

We spent two nights at Hideaway Campground & Oyster Market at Dingwall were we not only had a lovely view, but a good dinner of their farm raised oysters and very sweet lobster off their son’s boat.

Our view from the bench where we enjoyed our wine in the evening at Hideaway Campground.

We diverted off the Cabot Trail and headed further up the northern peninsula for the village of Capstick where the paved road ends and then on up the dirt road to Meat Cove the most northern community in Nova Scotia and the tip of the province.

Bay St. Lawrence on the way to Capstick.

The village of Meat Cove is the end of the road in Nova Scotia.

On the way back we stopped at Cabot’s Landing Provincial Park on Aspy Bay where some believe John Cabot landed in 1497.  There is little known for sure and some disagreement, but suffice to say everyone agrees he was the first European to land in North America except for the Norsemen but that’s an upcoming blog post 🙂

This is the suspected landing site of John Cabot’s expedition in 1497. 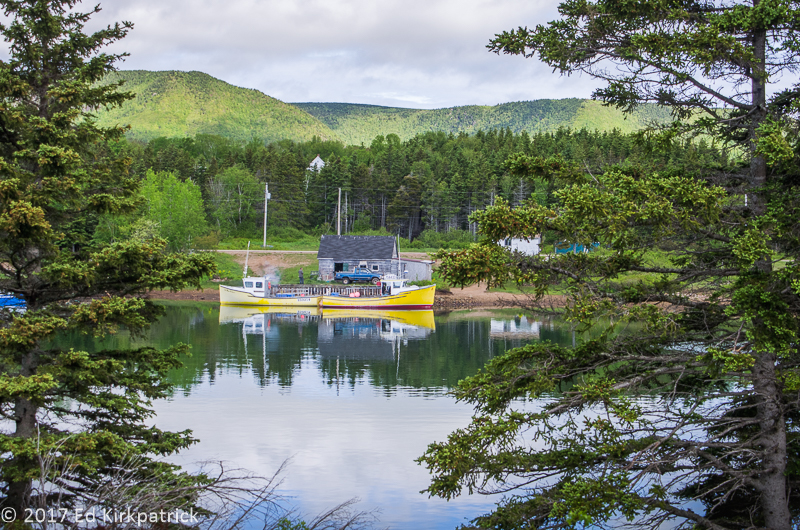 We spent this night at Broad Cove Campground back in the national park, and suggest fellow campers, that it also be a stop for the night on your trip.

On the eastern side of the Cabot Trail the roads are rougher, much steeper and not as pretty.  Maybe in the future they’ll be improved like those bits under construction over on the western side. We did take a short walk at Cape Smokey and saw Lady Slippers!

This is a wide section of path on Cape Smokey, but… 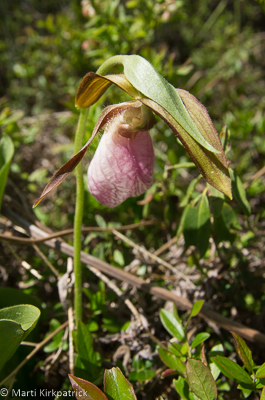 there are Lady Slippers.

Embedded in the cliff at Joggins Fossils Cliffs is a section of tree trunk.

A piece of Stigmaria fossil that shows the pith of the root.

Into the Highlands of Cape Breton.  We ate lunch along the small cove in this photo.

There are four languages spoken on Cape Breton: English, Gaelic, French and Mi’kmaq. This is in English and Gaelic though. 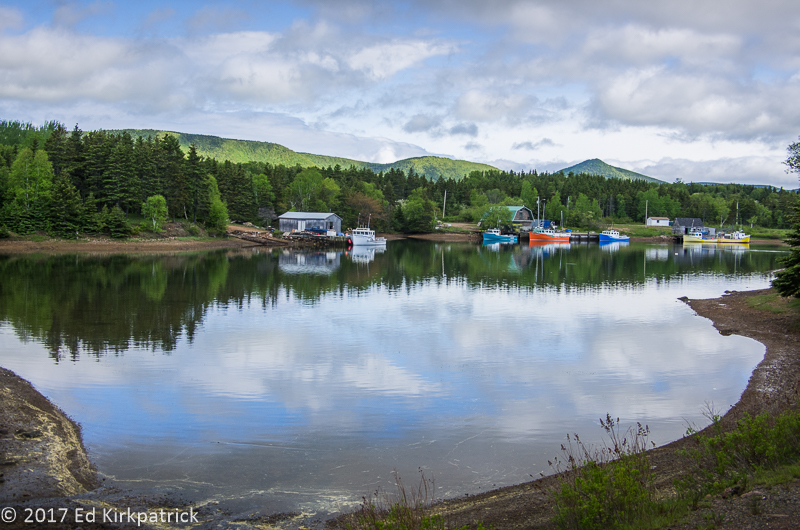 Fog cascading over the highlands along the road to Cape North and Meat Cove.

Green Cove where we stopped to have lunch. 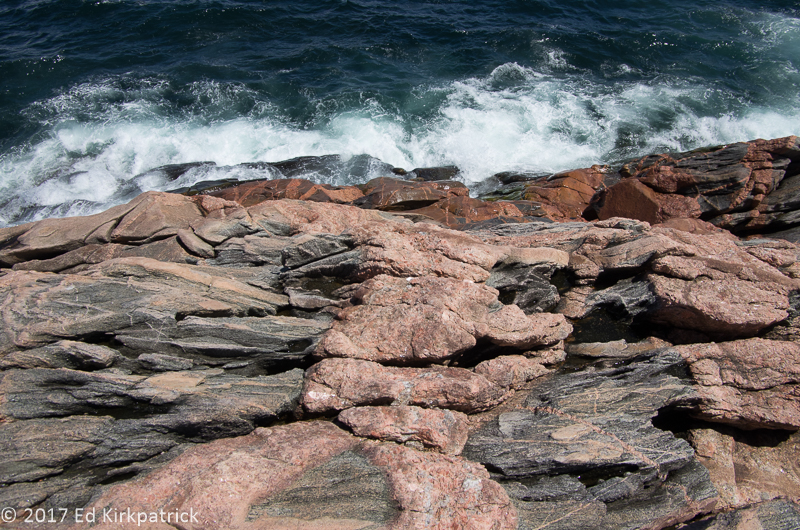 At Green Cove there is a terrific example of granite intrusions (pink) into cracks in the gneiss bedrock. 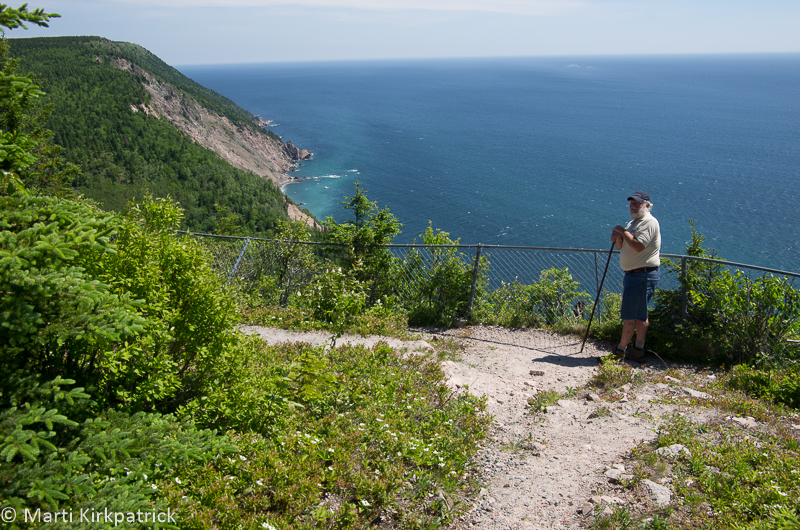 Meat Cove proper.  Not much once you get here but the drive and views are really nice.