We are extremely happy to say that after 3 weeks in lovely Iowa we finally got a working refrigerator (YIPPEEE!!) While we were waiting for said fridge we did some more looking around and visited both the highest point and second highest point in the state.  The highest point in a place that is basically flat (there are some areas with hills, see last post) is a bit amusing.  Getting to the observation tower at Pilot Knob the second highest spot actually requires a short walk up a hill and from the tower the countryside has contours and character.

View from the tower at Pilot Knob, Iowa

The highest place in the state is Hawkeye Point  and I swear if they cut the grass too close it would lose that designation 🙂 , but they’ve done a nice job of marking the spot.

and Hawkeye Point, the highest point in Iowa… just.

While hanging around waiting for the fridge we also popped down to the Matchstick Marvels Museum in Gladbrook to see Pat Acton’s amazing sculptures made entirely out of wooden matchsticks.  Ripley’s Believe It or Not has commissioned and purchased many of his HUGE pieces but there is also an impressive collection in Gladbrook.  I can not begin to imagine the patience this must take….not to mention the hours.  Stop by if you’re even close to the neighborhood, or a Ripley’s. 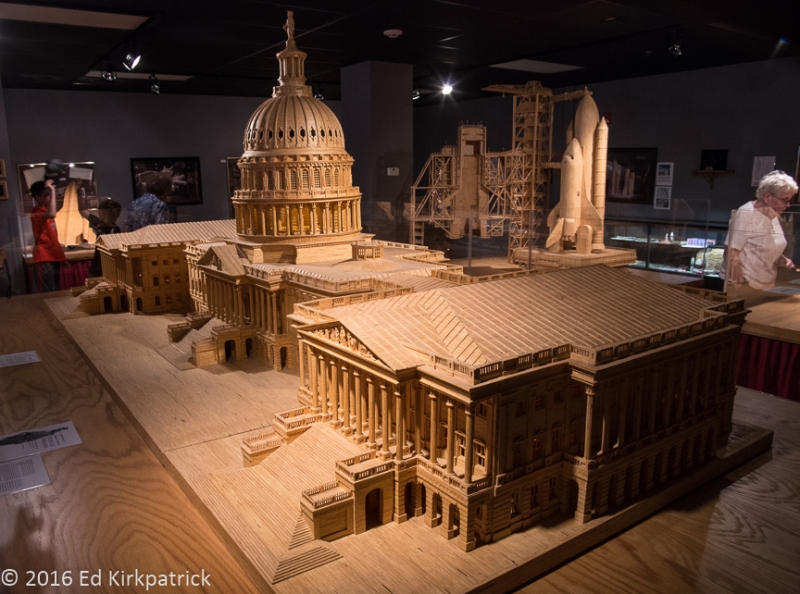 One other note about Iowa, A&W root beer milkshakes, (at least at the Forest City restaurant) are worth the trip…. YUMMMMM!!

Next up, Minnesota…land of 10,000 lakes….HA!….there are 11,842 lakes exceeding 10 acres in size and literally thousands of smaller size, and that doesn’t touch the rivers, and streams.  Water, water everywhere and yes, you betcha! mosquitoes but we had fun anyway!

Heading north on I-35 we swung west of Minneapolis and continued north on St. Hwy 169 to Onamia and Mille Lacs Kathio State Park.  The landscape started changing pretty quickly to hills, curves, fewer and fewer crops and more trees.  The park was very pretty, private and almost empty and we would have walked around but in hooking up our electric we were so nibbled on we decided not to venture out, plus we had a thunderstorm shortly after arriving. I nearly spilled my drink with one close by strike.

Next morning we went to the Mille Lacs Indian Museum.  This area is the home of the Mille Lacs Band of Ojibwe. The museum briefly tells some of the story of their history and craft, but mostly more recent history.  The Four Seasons Room is however the stand-out reason for making this worth the visit.  Admitted only with a guide, this large room is a circular diorama depicting the four seasons of the year flowing seamlessly from early spring into summer, fall and then winter. It shows how the traditional Mille Lacs lived. On a slightly raised platform backed by a beautiful floor to ceiling painting of the actual surrounding landscape the very detailed scene of wigwams, work utensils, toys, clothing, everyday necessities and tools are exactly and wonderfully, naturally displayed.  The life size mannequin’s faces are of the Ojibwe people who helped build and equip the diorama. It is perfectly done and absolutely delightful, in fact if you’re ever in Minnesota go ahead and put it on your MVL (Must Visit List)!  Oh, and we were there when they opened so we had the place to ourselves!

After doing the museum we headed up into serious lake/water country via Brainerd (lunch at Last Turn Saloon ~ beautiful bar, really good wild rice/chicken soup) to Itasca State Park and the headwaters of the Mississippi River….yes THE Mississippi !  Side Note: I am phonetically deaf and CANNOT spell but I have always loved spelling that name, it’s practically a song 🙂   It flows out of Lake Itasca as a lovely, shallow little stream. The mighty Mississippi isn’t the “Big Muddy” here.  Interestingly as I was mapping our route and looking for where the river flowed from the park I couldn’t find it until I discovered my mistake.  We are so geared to thinking it’s a southern river that it took me a while to see it actually flows north at the beginning!  This also should be on your MVL.

Spilling past the rocks, the Mississippi heads for New Orleans and the Gulf of Mexico.

As part of our Field of Dreams highlights we headed to Chisholm, Minnesota home of Archie “Moonlight” Graham, who by the way was a real person (“bet you didn’t know that”) to see if there was any remembrance of him or the movie…basically nope!  This part of the state is called the Range after the Mesabi Range which is the chief iron ore mining resource in the country.  The trees hid a lot of it but there were piles and piles of red rock tailings.

This is an iron ore pit mine that has been flooded.

We went to International Falls because, well because it’s International Falls and the Icebox of the Nation. We stopped in at Sandy’s Place and had lunch.  Tiny, packed with locals, we had the Friday special meatball dinner.  Sandy said she makes 30 pounds of meatballs (the size of tennis balls) and sells out.  The special (and most everything else) comes in small, medium and large and they ain’t kidding about large!  Oh…and strawberry cream (Ed) or banana cream (me) pies…yum!  GO, it’s FUN and pretty darn good 🙂

Ok, so maybe not tennis balls but still good and leftovers for dinner too… $8.50

In looking at the map I noticed a narrow tip going off at the top of Minnesota that I don’t recall ever having noticed before.

Called the Northwest Angle, it is the northernmost point in the lower 48 and there’s only two ways to get there….by boat or via Canada!  Well, of course we had to go and we only have the RV and I don’t do boats so off to Manitoba we went! 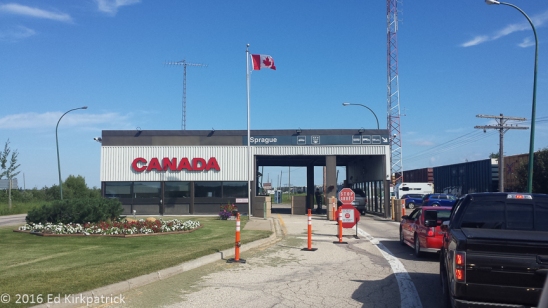 Don’t tell Donald Trump but not only is there no wall, you drive out of Canada into the USA for 8 miles before you PHONE in the fact that you’re in the country!! Helloooo!   We kid you not!! WHAT FUN!!

While clearly the best way to see this state is with a boat, and indeed judging from the cars and trucks on the roads everyone except us had one, we have enjoyed our visit very much. Plus one of the benefits of all this water is the sky which by early/mid morning begins to transform and by the mid-afternoon was just gorgous with huge puffy white cotton balls of magnificent clouds.  Very nice!  Maybe some day we’ll even try winter up here…..well maybe not!  -30* 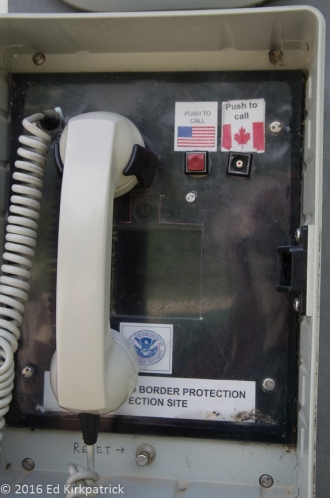 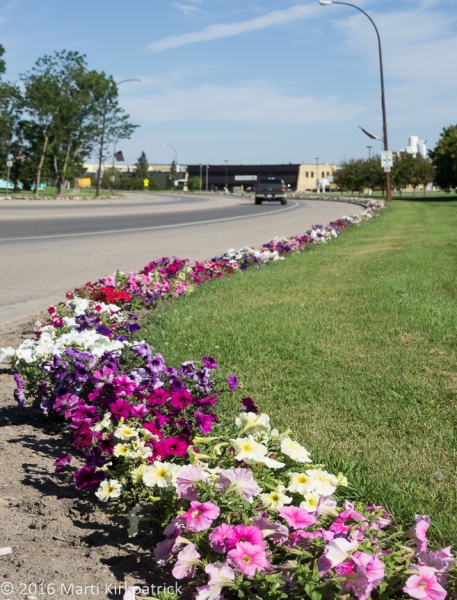 Both sides of the road in Warroad, MN are lined with these lovely petunias.

Two Mississippi…  Spitting in the river…  Look out New Orleans! (and our friend Michael Verderosa)

At Hawkeye Point the national Highpoint Club has made a display of license plates from each state.

Last Turn Saloon back bar built of solid oak in 1871.

Rainy River.  Ontario, Canada on the left, USA on the right.

A local denizen of the upper Mississippi.

Marti is getting pretty good at this.  Rainy River with Canada on the right.

Whack-A-Mole Wheels at the tippy top of the lower 48! 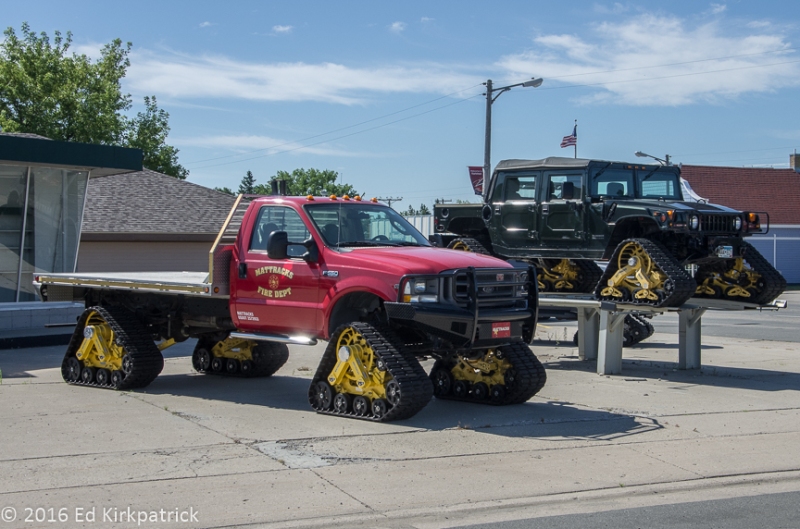 Ed would kill to drive one of these in the snow.