With our arrival in Washington, Ed adds one more, #45 to his almost completed list of states visited.  We headed straight for Spokane (spoKAN) to visit with Moni (Monica) & Fred Spicker.  Moni and I became “blood sisters” back in junior high school but missed each other’s wedding because we got married on the same day. Although we have rarely seen each other since our early 20’s we still start right up where we last left off.  Fred was in recovery from an involved shoulder surgery and so Moni went into tour guide mode and showed us the surrounding sites.

Moni and Fred outside their cute Craftsman house beside Corbin Park, Spokane.

The geology of Eastern Washington is a fascinating result of almost unimaginable huge flows of lava followed much later by equally huge floods of water.  At the end of the last Ice Age in western Montana, a glacial ice dam that had blocked the Clark Fork River for thousands of years broke.  The estimated 500 cubic MILES of water that was Glacial Lake Missoula came roaring out of the mountains of Idaho scouring, reforming, redirecting and gouging the landscape around Spokane, the Columbia Basin and eventually into the Pacific.  Geologists estimate there were as many as 40 of these floods over about 2,000 plus years!

Our first day Moni took us to the Riverside State Park and the Bowl & Pitcher for a short walk around the lovely Spokane River.  Great basalt rock formations and cliffs make an interesting and unique landscape that invites climbing but closer inspections of potentially loose rock keep me on the trail.

The Bowl and Pitcher on the Spokane River in Riverside Park, Spokane.

Having worked up a bit of an appetite, we collected Fred and went to Mary Lou’s Milk Bottle for lunch.  Their specialty is milkshakes and we do recommend them…in fact that’s all I had for lunch 🙂

The next day we went to Manito Park in the South Hill neighborhood of Spokane and had a nice walk around the various gardens and greenhouse.  The Rose Hill area of the gardens was especially nice.  Unlike so many rose gardens we’ve been to, here instead of a single plant of each they did large groupings and the effect of a mass of say Queen Elizabeth next to Mt. Hood was wonderful. The scent on the soft breeze was pretty darn nice too!

While Marti and I agree this is an exquisite photograph of a beautiful rose, she’s irritated that I did not take a picture of the overall garden, but she loves me anyway.

That evening we had a delicious dinner at Wild Sage where Ed and Fred enjoyed the attentions of possibly the most lovely and exotic Cleopatra-like waitress ever.

On day 3 Moni (being a dedicated Whack-A-Mole Wheels blog reader) loaded us and some good sandwiches up and headed out to show off the kind of landscape she was sure we’d love.  She was right!  The incredibly beautiful Palouse prairie with its layers of varying depths of loess (windblown silt) lying on top of Washington’s ever present volcanic basalt is like nothing we’ve ever seen.  It’s a unique landscape, there is nothing else like it in the world.

Amber waves of grain, the Palouse.

While vast amounts of wheat, barley and chick peas are grown here it is the Palouse that is the most important lentil growing region in the US. For miles and miles the undulating hills of crops are only broken up by spots of ground too steep to plow, often faced with exposed basalt.  These “eyebrows” add a delightful feature to this fabulous countryside.

Moni drove us to the top of the 3,612 foot tall Steptoe Butte sitting in isolation on the Palouse.  This quartzite protrusion of bedrock is 400 million years old, having withstood the much younger lava flows of the basalt layers under the surrounding layers of loess.  The view, well, put it on your MVL (Must Visit List).

View from the top of Steptoe Butte. It’s just magnificent.

On the southern end of the Palouse is the Snake River, where the farming stops because basically the soil ends.  Then about 4 miles upstream from the confluence with the Snake and the Palouse River we visited the beautiful Palouse Falls State Park and had our picture taken 🙂 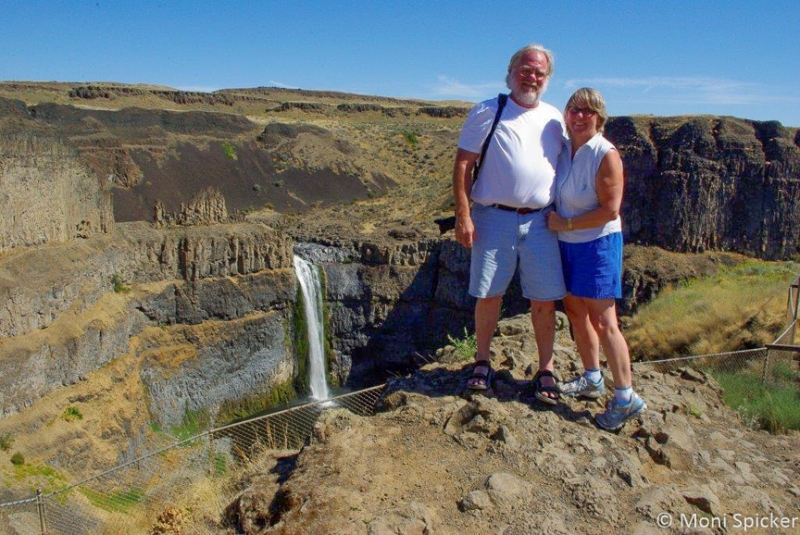 All in all, a perfect start to our Washington State adventures.  Thank you Moni & Fred!

The formal Duncan Gardens in the same park.

In the greenhouse, I did not note the name of this really cool flower.

Steptoe Butte at 3,612 feet elevation it’s a good spot for radio towers but the view is still nice.

Piles and piles of grain, the harvest was underway.

Lentils from Steptoe Butte. It goes on forever.

Steptoe Battlefield where a fight with Indians occurred in 1858.

Our view from our picnic site on the Snake River.