While camped at the RoVer’s Roost RV Co-op two weeks ago we went to see The Casa Grande ( “Big House”) Ruins in nearby Coolidge AZ. Abandoned around 1450 by the ancient Sonoran Desert people who built them, the name refers to the largest structure on the site completed about 1350.

Built up of layer upon layer of caliche it is four feet wide at the base, narrowing as it goes up. The house consists of outer rooms surrounding an inner structure which is an amazing four stories high. Its walls face the four Cardinal points of the compass with holes and openings that align with the sun & moon at specific times of the year. What this particular structure was used for is unknown. There are other smaller ruins of the village scattered in what was the walled compound. 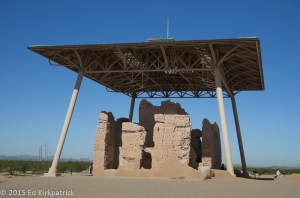 Concern about souvenir hunting, graffiti and vandalism prompted repair and protection and in 1892 President Benjamin Harrison set aside a square mile surrounding the ruins as the first prehistoric and cultural reserve established in the United States. The ruins are interesting but Ed was most impressed with the steel shelter roof built over the entire structure in 1932! As you can see, it is indeed remarkable.

After our Natural Bridge adventures were over we headed off to Camp Verde. This area is the location for two important ruins and one natural wonder. Misnamed by early settlers who assumed that it was Aztec in origin, Montezuma Castle is a five-story, twenty room cliff dwelling about ninety feet up a sheer cliff.   Built between 1100 and 1300 it is an excellent example of early stone and mortar masonry constructed almost entirely from chunks of limestone. A short distance away against the cliff there is also a badly deteriorated five-story building with about forty-five rooms. Again these people abandoned these homes by the early 1400’s.

About eleven miles northeast of Montezuma Castle National Monument is Montezuma Well. A natural limestone sinkhole with an incredible upwelling of deep 74 degree groundwater, this peaceful pool is replenished by 1.5 million gallons of water per day!

Remembering that all the earth’s water is ancient (refreshed is perhaps more accurate) it is estimated that the water entering the pool is about 10,000 years old. The water wells up through two vents with a force so strong divers cannot drop instruments down them.

Overflowing through a long narrow crack this water was directed by the ancient people into dug canals, some as long as seven miles, to irrigate their crops. Interestingly, recent test have shown the water to have high concentrations of arsenic. The area is also full of ruins covering many cultures from pit houses to small cliff dwellings in the walls around the well and pueblo villages dotting the banks of the waterways through the valley.

Tuzigoot National Monument located on the summit of a long ridge above the Verde Valley just east of Clarkdale, was built between 1000 and 1400. This village began as a cluster of rooms for about fifty people and then about 100 years later the population doubled and then doubled again.

The pueblo eventually was two stories high in places with eighty-seven ground floor rooms and 110 overall. 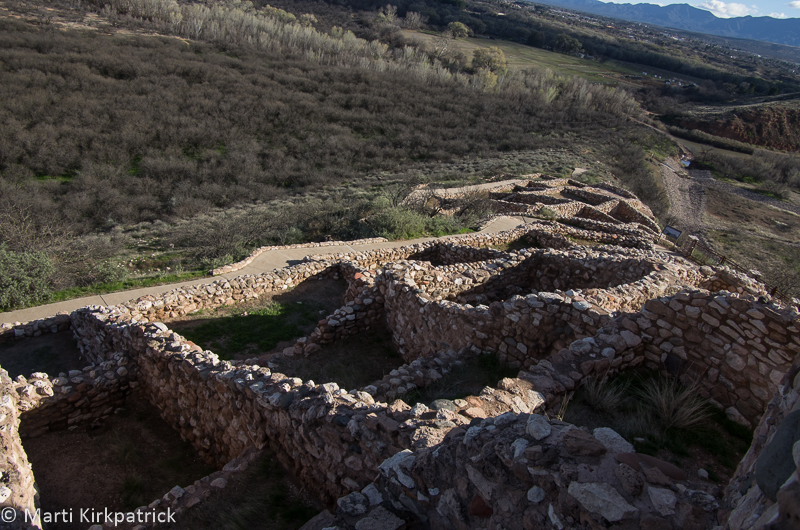 The visitor center museum here is excellent. I was especially impressed with their collection of pottery. It is very difficult to make large vessels and the number of very large and well proportioned pieces found at this (and other) ancient sites is amazing.

Now for some shameless bragging….. A few weeks ago Ed & I were very pleased to have been invited to submit an article and photos to the on-line magazine BoomerCafe.  The magazine is for and about baby boomers but we’re sure younger folks will enjoy it too.  We are really tickled to announce that several days ago we were published!