We have mentioned the Tonto National Forest in earlier posts. Encompassing almost 3 million acres including 8 wilderness areas it is just magnificent and covers everything from low desert to pine covered peaks where just the other day snow was falling. We drove down State Route 188 through Tonto Basin and along the Theodore Roosevelt Lake to State Route 88. Known as Apache Trail, 88 starts at the Roosevelt Dam

on the Salt River and runs 40 miles west through the Superstitious Mountains to Apache Junction over some famously harrowing and beautiful road.

View from 88 looking back at our campground by the lake.

Our spot on the lake.

About 6 miles back on 88, about as far as we dared to drive, is the Burnt Corral Campground on Apache Lake where we dry camped for 2 nights. We have a “Senior Pass” for the National Parks and Forests that gets us in for free. We thought this was sufficient for camping but the nice park ranger who dropped by informed us otherwise. Since we would have had to decamp and drive back out the road to the Ranger Station to get our permit and then likely lose our beautiful spot on the lake, he allowed us to stay the night without it. Just goes to show that nice people are everywhere.

Part of the fun in what we’re doing is meeting people and our neighbors were a young couple, Valerie and Scott, from Boulder CO. Like us, they also designed and built their home, sold it last summer and are living in their truck camper traveling around the west for a year. They kayak, hike, and mountain bike as they go too. Only in their early 40’s we were very impressed.

After Burnt Corral, we drove north up 87 staying in the Tonto NF through the wonderful tall pine forests (REAL TREES!) around Pine, Strawberry and Payson where we saw a sign for the Tonto Natural Bridge State Park.

Hidden in a tiny valley at the bottom of a steep 14% grade, this natural bridge is 183 feet high, with the tunnel being over 400 feet long and at its widest point 150 feet. It is believed to be the largest natural travertine bridge in the world.

“The discovery of the small and beautiful valley between Pine and Payson was documented in 1877 by David Gowan, a prospector who stumbled across the bridge as he was chased by Apaches. Gowan hid for two nights and three days in one of several caves that dot the inside of the bridge. On the third day, he left the cave to explore the tunnel and green valley surrounding it. Gowan then claimed squatter’s rights.”

Marti walking down to the tunnel.

This yellow lichen is everywhere around Arizona and we think it is really lovely.

As you can see in Ed’s photos the size of this place is amazing and beautiful. It should go on your Must Visit List. 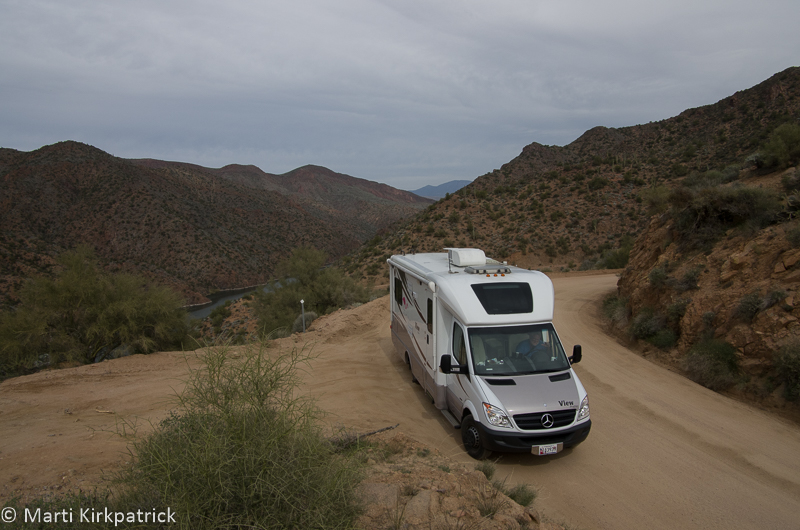 State Route 88 looking back towards the dam.

Next up is Camp Verde and ancient ruins.