Heading towards Mount Saint Helens from Ellensburg we drove south on State Rt. 821 which follows along beside the Yakima River through huge grass covered basalt mountains.  It was a Saturday and even though it was cloudy and just barely warm the river was full of folks individually, or tied together in groups, tube floating down this lovely wide river.  It’s a delightful drive and we highly recommend it over the parallel route of Interstate 82 and the rafting part looks like great fun. 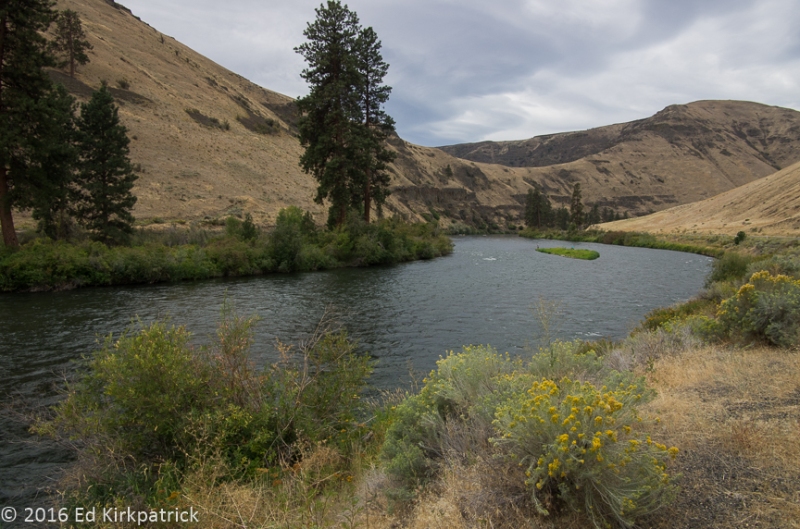 A small stretch of the Yakima River without tubers. 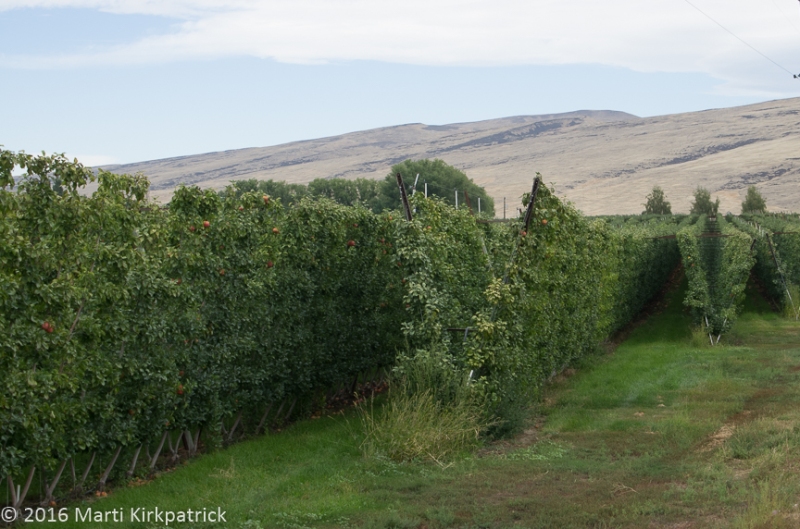 As we left the Yakima River Canyon we found this orchard of espaliered apple trees. This is something you usually see in formal gardens. Why they were espaliered we don’t know but they sure were pretty.

From there we took the beautiful US Hwy 12 to get to St. Rt. 505 then St. Rt. 504 (Spirit Lake Hwy) up to Johnston Ridge Observatory 5 ½ miles from the blast site of Mount St. Helens.  This drive affords spectacular views of the forest destruction, lahar mudflows, ash fields, surrounding landscape and of course, the still active but quiet volcano herself.

This is one of the lahars from the eruption.  A lahar is a type of mudflow or debris flow composed of a slurry of pyroclastic material and water.  The material flows down from a volcano, typically along a river valley. In this case the North Fork of the Toutle River valley covering 25 square miles.    A video is here.

The observatory is named for David A. Johnston the USGS volcanologist who was killed while manning an observation point 6 miles from the volcano near this spot. The display of photographs, and timeline of the eruption on May 18, 1980 is very interesting, and the section with the stories of survivors and what they saw and went through is fascinating and incredibly sobering.

There are ranger’s talks held about every 20 minutes and we decided to listen to one. Like many of you dear readers, back in that spring of 1980 we had followed the news articles detailing the destruction, the many lives lost and the effects of the aftermath, but we had no idea really until we listened to Ranger Todd (who’s been here 30 years) tell about the eruption.  With encyclopedic knowledge (and humor) he explained the astonishing speed and power of the explosion and destruction accompanied by first hand photos and accounts.  Quite literally jaw dropping!!  Ed and I both agree he is one of the most fascinating, informative and delightful people experiences we’ve had on this adventure!  Absolutely put a visit to Mount St. Helens and the Johnston Ridge Observatory on your MVL (Must Visit List)!! 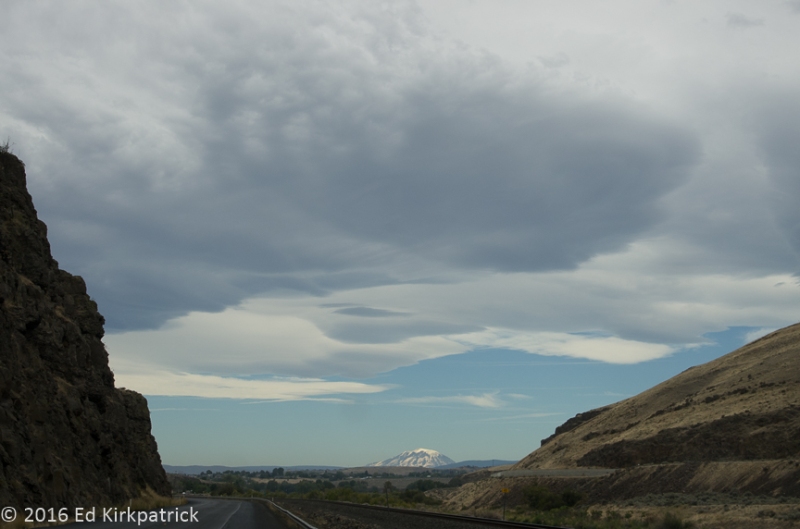 Our first view of Mt. Rainier from the Yakima River Valley.  Shortly after this it was obscured by clouds never to be seen by us again.

A typical view along HWY 12. 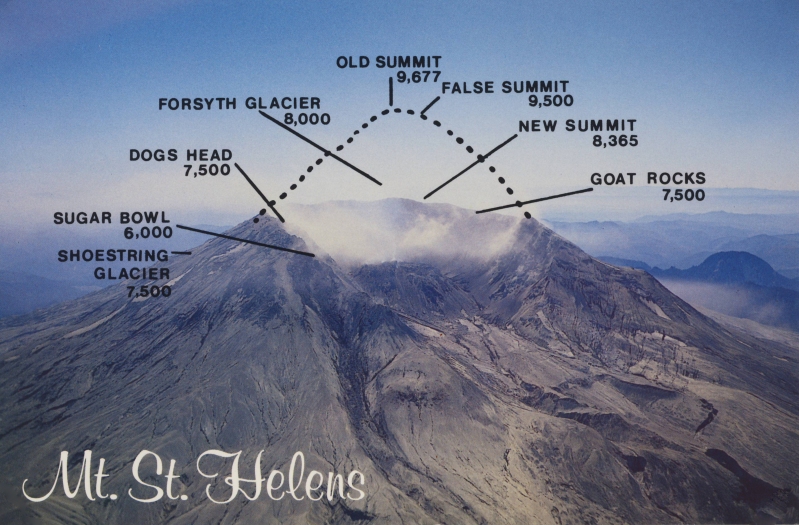 and now.  This is from the Johnston Ridge Observatory.

The soft ash is easily eroded by snowmelt and rain.  You can see some vegetation is coming back. 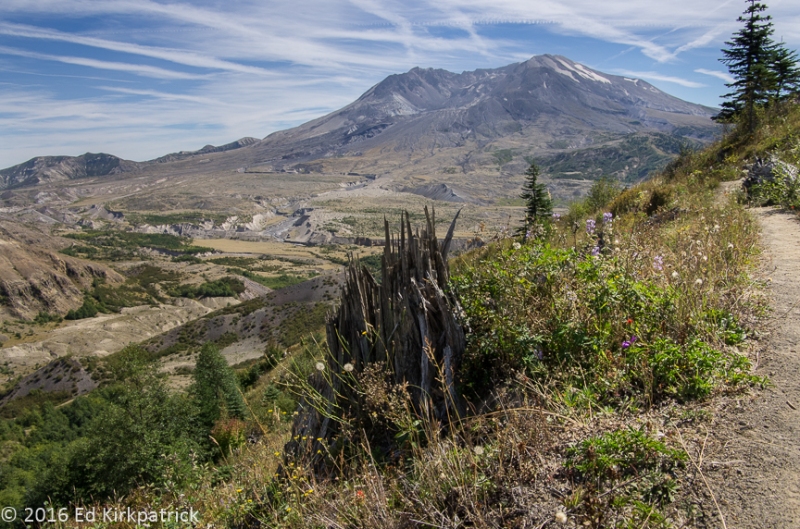 We walked out along a path that ran along a very, very steep and soft hillside.  This tree is one of the remaining examples of how violent the explosion was at this distance from the volcano.

A pretty detail along the above path where we stopped to chat with an older couple who were sitting to enjoy the view.  They come here often to see the rebirth and remember because they lived through the eruption.  The gentleman told us that on the night of THE day he got up to check on things and  also to drive down to check on their neighbors. Down the road the mud flow was high enough to come to his floorboard so he turned around and went back home.  He said  “I got her up (pointing to the lady) and said wake the boys and get the 3 dump trucks and go! ”  At that point the pickup would not start again so they left it and fled in the dump trunks!!!

A view of snow covered Mt. Adams on the left, 25 miles away where a hiking party on the summit witnessed the eruption.  They heard no noise whatsoever because they were in the so called “quiet zone” due to the complex response of the eruption’s sound waves to differences in temperature and air motion of the atmospheric layers.  Others heard the boom as far away as British Columbia, Montana, Idaho and northern California.  Prevailing winds blew the ash cloud towards them and static electricity from the dust particles charged every metal thing they had with them causing it to hum including a 14 year old boys braces.  Then debris began falling on them and barely escaping with their lives they ran down the mountain.

The volcano is still active with live steam vents in the crater and some recent rumblings.  Winds kick up the ash creating a haze around the crater.

Harry Truman, who owned and operated the Spirit Lake Lodge refused to leave and is buried under more than 150 feet of debris.  He is one of 57 dead or missing.