Hello from Nevada!  I know, I know last blog post was from Mount St. Helens Washington so what’s with Nevada?  Truth is we are so behind in our posting we have decided to skip quickly (fewer words, more of Ed’s photos) through our travels in Washington, Oregon and California…yeah we’ve physically already covered that much territory!

After Mt. St. Helens we broke our normal pattern and got on Interstate 5 and did a hard drive north to St Rt 20 and the very lovely Anacortes City Washington Park.  Sitting on the west end of Fidalgo Island there are lovely views of the San Juan Islands and Olympic Mountains along the 2 plus mile loop road we enjoyed walking. 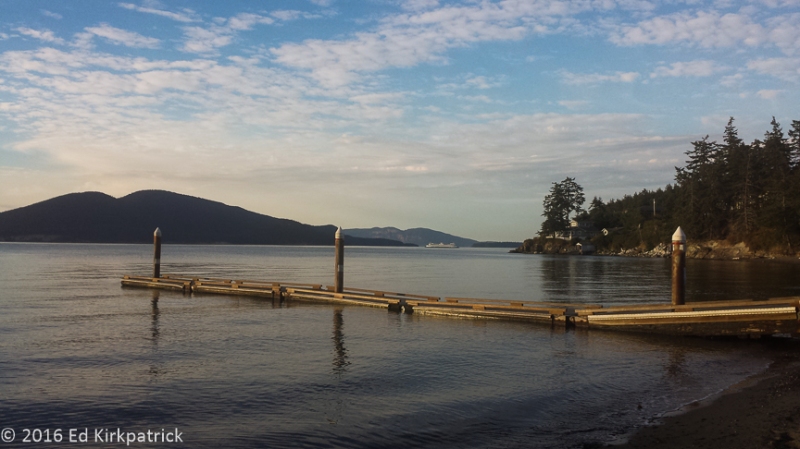 Driving on down 20 we took the Coupeville Ferry to Port Townsend (yes fellow RV’ers you’ll fit) which is a town we recommend for a short visit. However, plan ahead as the Port Hudson Marina & RV Park, right on the edge of town is small and popular and sooo convenient.

Our evening sunset lights up the clouds to our east at Port Townsend from our campsite.

Wandering around town we especially recommend Insatiables Books (rare & used where Ed bought a copy of Winnie the Pooh in Latin), Forest Gems Mill & Gallery (wonderful wood works and raw wood), Better Living Through Coffee (dark chocolate mocha!) and dinner at Alchemy Bistro & Wine Bar.  Oh and if you’re into handmade wooden boats, Port Townsend is the place for you!  The wooden kayaks built here by Pygmy Boats are just beautiful!! Although we missed it there’s the famous Wooden Boat Festival every September.

There is also some really cool architecture in Port Townsend.

Being in the neighborhood so to speak we drove out lovely Rt. 112 to the Makah Indian Reservation and Cape Flattery the most northwestern point in the contiguous US.  Put this place on your MVL (Must Visit List).

We wandered off the path and the point beyond Marti is Cape Flattery.

and this is the view west from Cape Flattery at that point behind Marti.

Next up was the west side of Olympic National Park and the Hoh Rain Forest. I remember being fascinated by the temperate rainforest when Dad brought us west in 1962 and it hasn’t lost any of its charm.  Truly lovely in its remarkably green mossy mantle, it’s easy to believe that “thing” over yonder was a sasquatch, and boy oh boy are carvings, and drawings and businesses in on the bigfoot craze 🙂

We drove the famous coastal highway 101 which by the by is not all coastal, but lovely regardless, eventually ending up at Cape Disappointment State Park for our last night in Washington State. 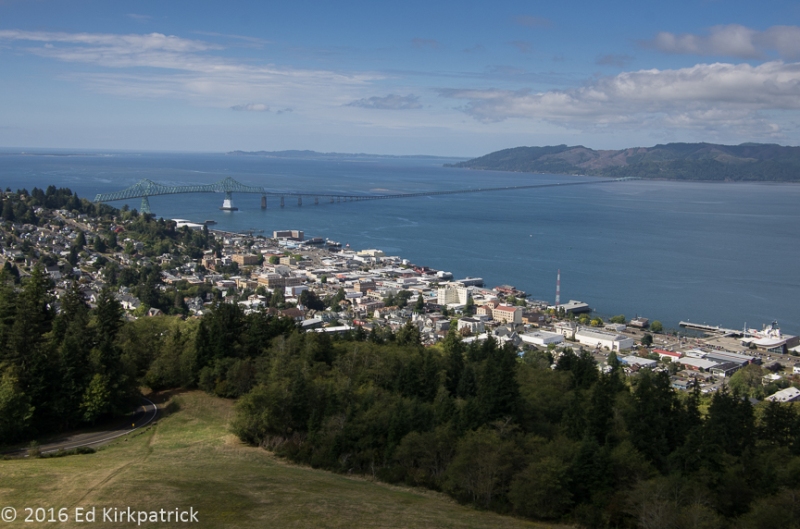 Astoria from the Astoria Column.  The bridge from Washington State across the Columbia River is in the distance.

Our first stop in Oregon was Astoria where the Columbia River meets the Pacific Ocean.  One of the most dangerous crossings in the world, the bar here where the Columbia flows into the Pacific has sunk many a ship earning it the Graveyard of the Pacific name.  Reading about past and present stories of trying to cross during storms and the bar pilots who bring ships across is well worth your time at the interesting Columbia River Maritime Museum.  Afterward, do stop by Clemente’s Café for a good meal and to watch the boats. 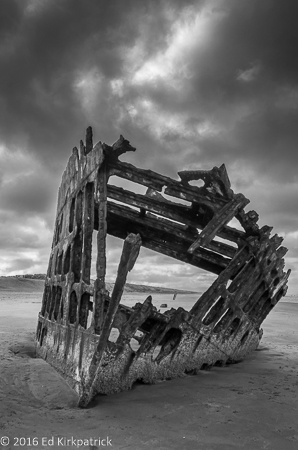 The remnants of the wreck of the Peter Iredale a victim of the Columbia River bar on October 25th, 1906.

Ed in particular has a fascination with Lewis and Clark having a number of years ago read simultaneously Stephen Ambrose’s Undaunted Courage and Lewis & Clark’s Journals, so we had to visit Fort Clatsop National Memorial.  This is the site where the Corps of Discovery encamped in December 1805 until March 1806 when they headed back east.  There is not only an excellent small museum the fort has been replicated on the exact spot (they believe within 2 feet) as it was originally.  We highly recommend a visit here. 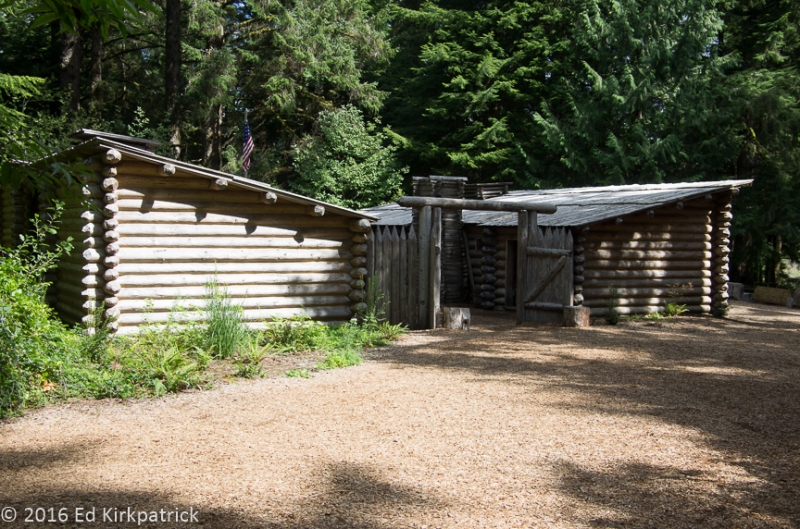 Fort Clatsop from outside the gate.  We asked why in such a rainy climate the roof was pitched inward and the answer was that the US Army protocol was to blame.  The roof is pitched like this so soldiers inside the fort can have a clear shot at invaders coming over the top.

Hope we’re not moving too fast…and do look for another posting soon! 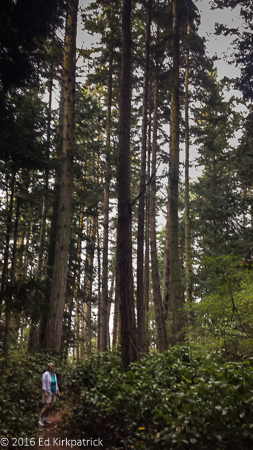 Marti walking among the coastal cedars at Washington Park on Fidalgo Island. 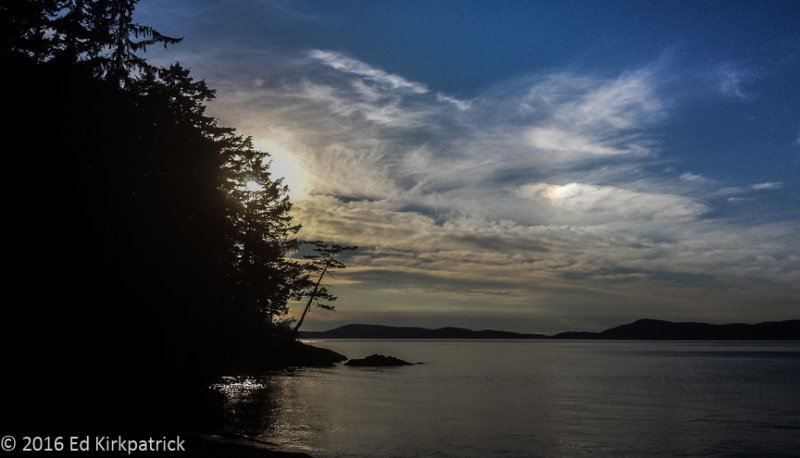 The next day we sat along the water and watched the Sun set and the ferry’s go back and forth.  Marti really likes silhouettes.

At Cape Flattery just to the left of the point.

At Cape Flattery we had the great joy of sighting extremely rare Sea Otters.  Four of them!

Still at Cape Flattery we saw these sea caves that are full of Cormorants squawking up a storm.  There were hundreds of them in this cave and the stench was noticeable. 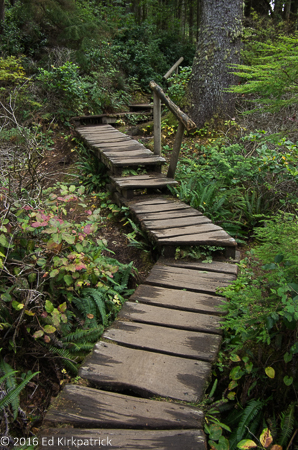 The walkway out to the point was laid out by an artist.  It was simply beautiful and perfectly proportioned following the ups and downs of the landscape.  It was the prettiest woodland walkway we have ever been on in our lives.

Marti thinks these are two giant woodland creatures sitting side by side. 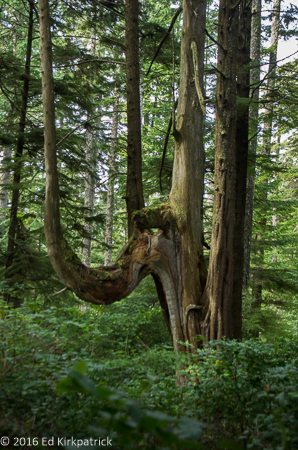 Then there’s the Winged Snuffleupagus.

We saw all kinds, colors and shapes of Banana Slugs all over the Olympic Peninsula. 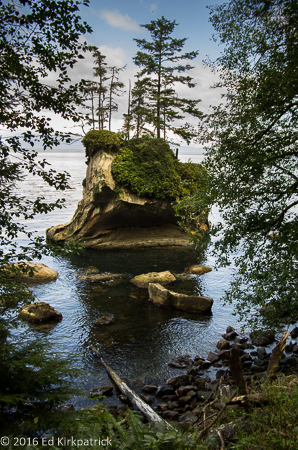 Along the road to and from Cape Flattery. 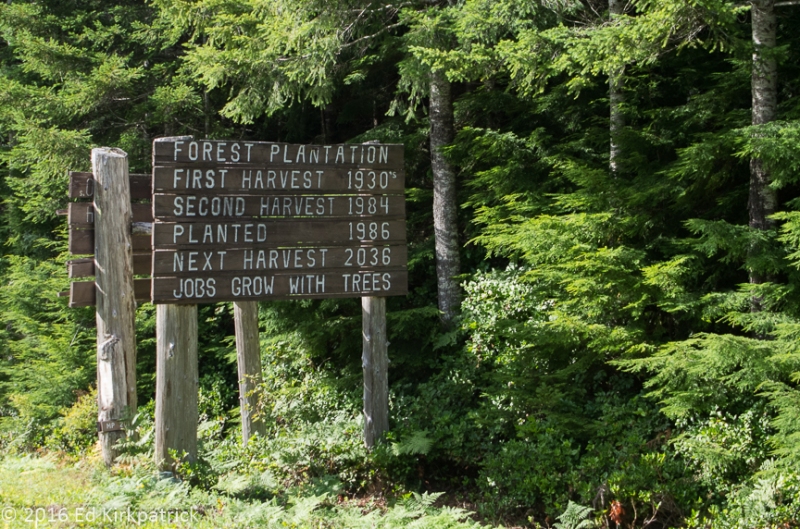 Ed thought this was interesting as it shows how long it takes to grow a forest.  Timber is the biggest industry in this part of the world.

In the Hoh Rain Forest on the west side of the Olympic National Park, Marti found a lovely walk. 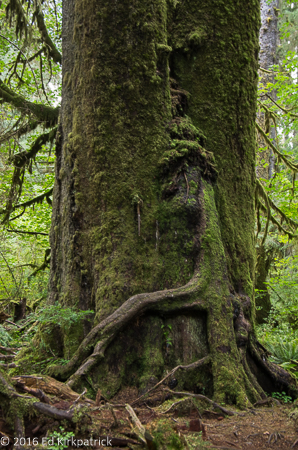 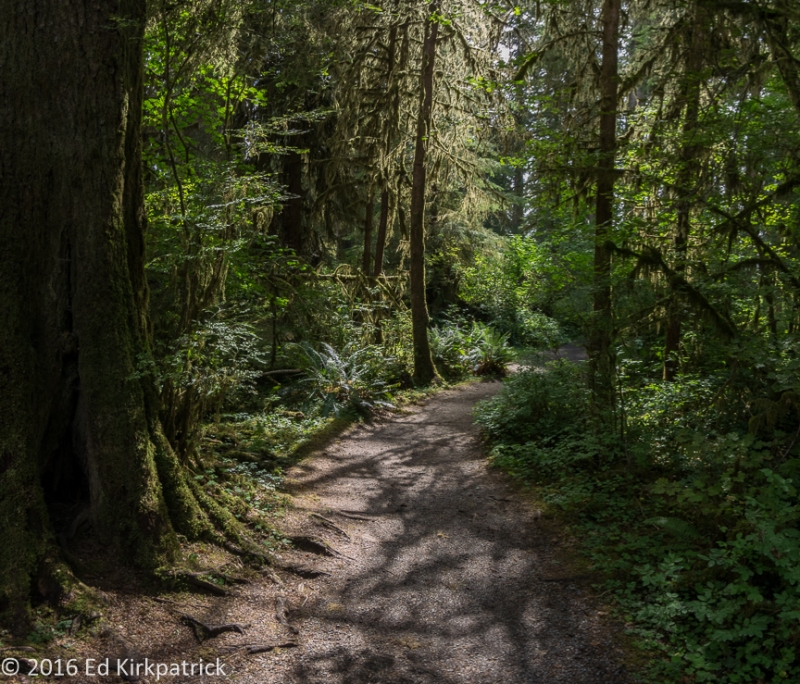 Along the Moss Trail in the Hoh Rain Forest. 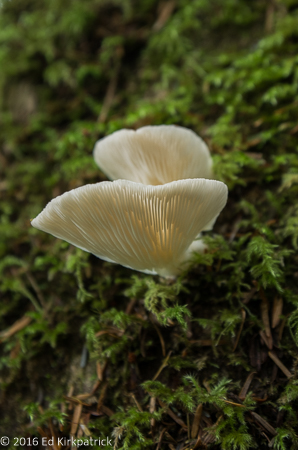 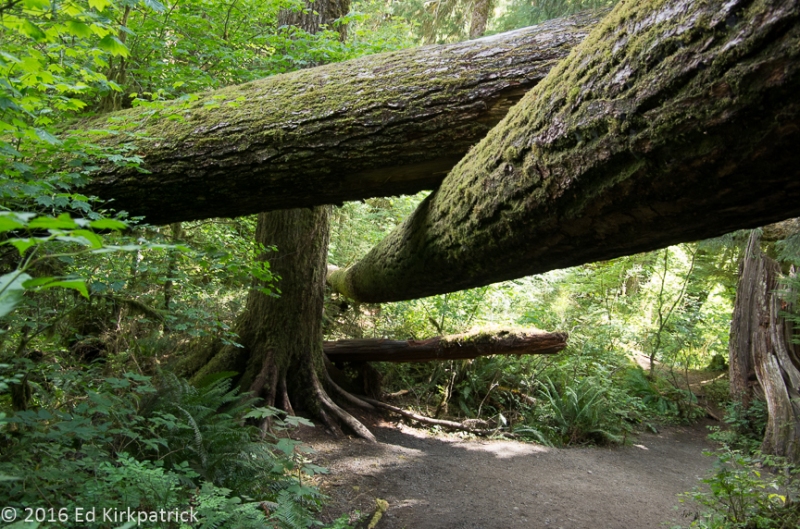 Pick Up Sticks in the rain forest…?

On 101 Ruby Beach is littered with driftwood as is the entire coast.

At low tide the Sea Anemones are exposed at Ruby Beach.

Further down the coast towards Cape Disappointment. 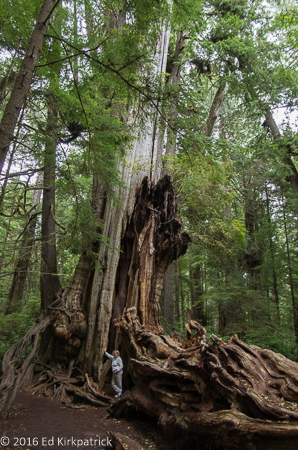 A sea stack at North Head.

The Astoria Column, 164 open grate steps just about did Marti in. It’s not the climbing, it’s the opens stairs.  The artwork on the side portrays the history of Oregon.

The beach near Ft. Stevens south of the Columbia River bar.

The Captain’s quarters at Fort Clatsop. 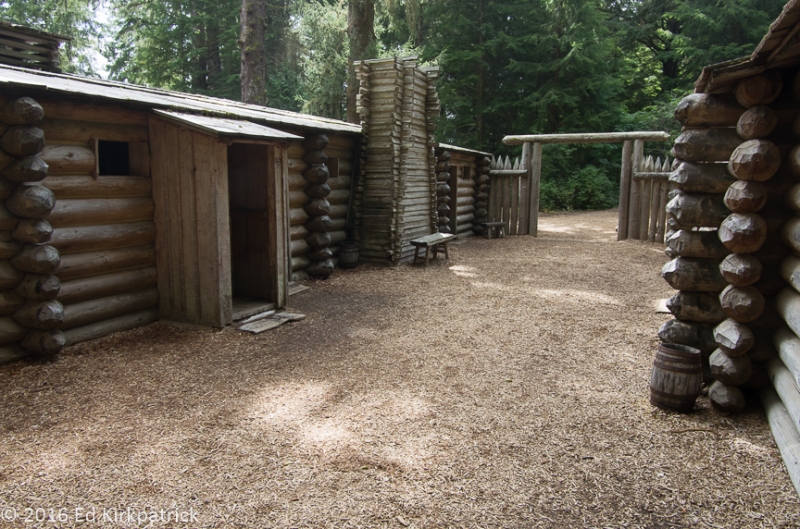 The courtyard inside the fort. 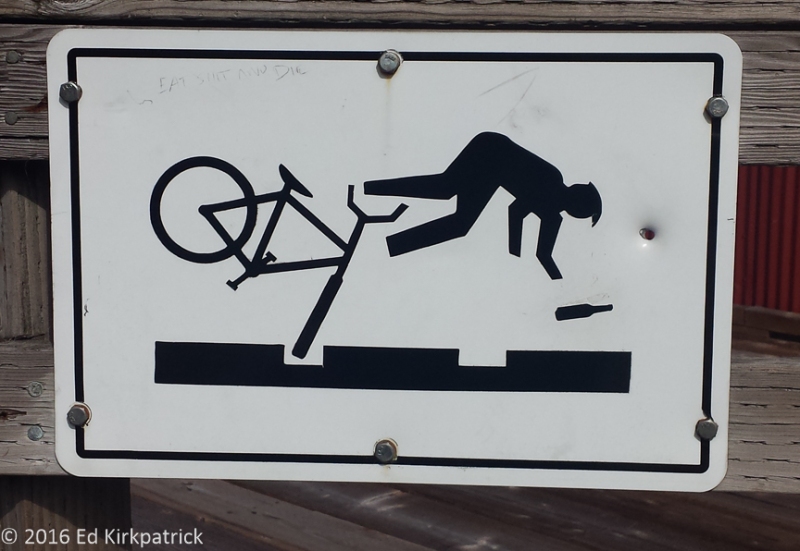 In Astoria, there is a trolley line and this sign warns bicyclists who may have been drinking about the tracks.