With our plan having now evolved to checking out Lake Superior on our way to Thunder Bay we crossed into Ontario on RT 101 where the traffic was almost at once much lighter.  Don’t know why but it gave Ed a break as he regularly tends to drive on the shoulder (when there is one) to allow folks to pass us easily.  We were headed for Wawa where we’d take the TCH 17 which is the Ontario part of the Lake Superior Circle Tour.  NOTE: The Trans Canada Highway is generally just called the TCH but notice that it has a number. That is because it’s actually many different roads. It can be equated to our interstates.

The landscaped changed with more rock and initially some small mountains, but that didn’t last although the rock did. 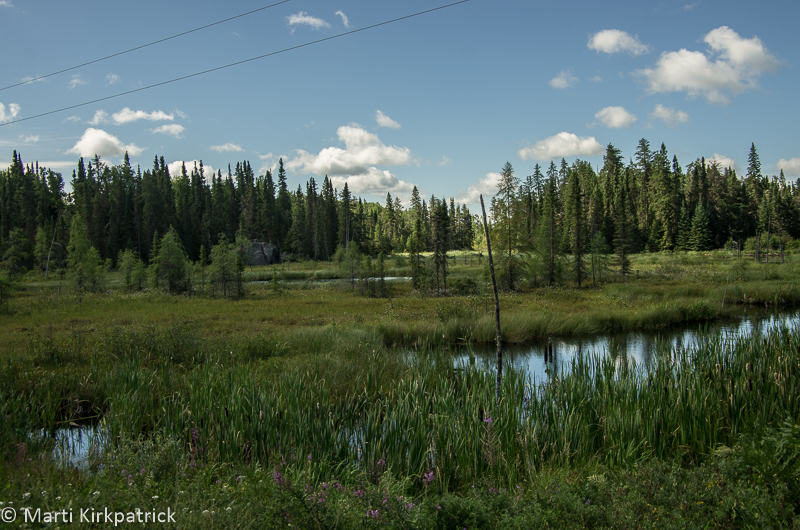 Granted, there is no rock in this picture but there’s a hill in the background and like the title says, trees and water. It’s pretty anyway and it is what we were seeing as well.

In Wawa at the Embassy Restaurant, which has a very grand name for a very down home place, we had a really good cheeseburger. Believing it’s always right to help folks hanging on, we recommend you too stop for a meal if in the area. 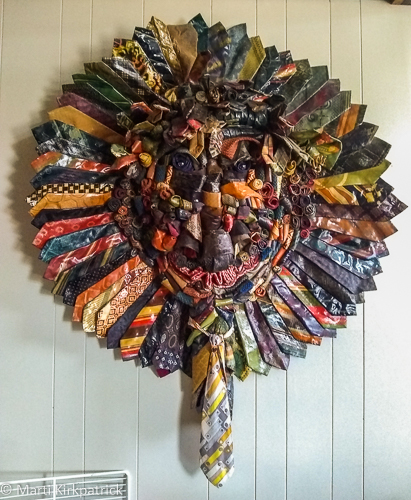 In the Embassy Restaurant there was this wonderful wall hanging of neckties and what I think can be described as an First Nation mask.  As artists, we are very sorry to not be able to give credit where it is due.  The young man who waited on us knew nothing about it except it had been there forever.  Isn’t it fun?

The good folks of Wawa when the TCH bypassed the town in 1960 wanted something to slow folks down and bring them into town so they made a giant Canada Goose sculpture.  There is a newer one down by the visitor’s center but we liked this old guy.

Our next stop for the night was in Marathon another town barely hanging on but they have a very nice municipal park, Penn Lake Park where we stayed two nights. In town there is also one of the nicest coin laundries I’ve ever used, although it was a bit expensive. There’s also Rumours where we had our first homemade butter tarts WOW!  I don’t particularly care for real sweet and rich but OMG!!!  They are reason enough to go to Marathon, Ontario, YUM! 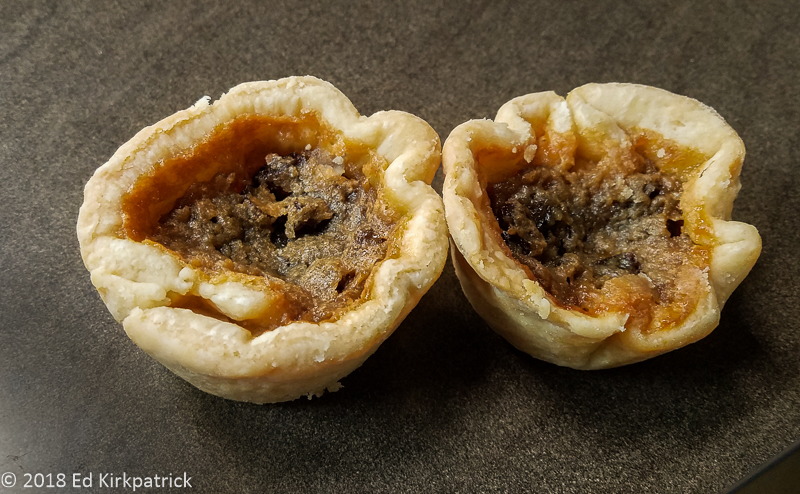 We stopped for the short walk out to Aguasabon Falls & Gorge.  This is a man made waterfall!  In the late 1940’s in an effort to assure ample water for the Aguasabon Generating Station, Ontario Hydro built a dam at the northern end of Long Lake to redirect its northern flow, south.  This in turn, massively enlarged Hays Lake.  The spillway from Hays created these falls.

We have been chuckling to ourselves because for a great deal of this route is too far away from Lake Superior to see it.  Where it is visible it’s often through trees and just “oh there’s water out there”.  We’ll see a sign indicating a lookout (in the US we call that a scenic view) and there is nothing to see and/or too many trees to see anything anyway.  Several times there’s a lovely view but the official lookout is past the good view!   It also didn’t help that the light was really crummy.  We never took a picture because the view was crummy.

At Terrace Bay we did actually get a chance to go down to Lake Superior.  It was fun to put our feet in the water but you can see the light across the lake is just crummy and smoky from fires in Ontario up way north and British Columbia.

We stopped for the night at Sleeping Giant Provincial Park which is on Marie Louise Lake. 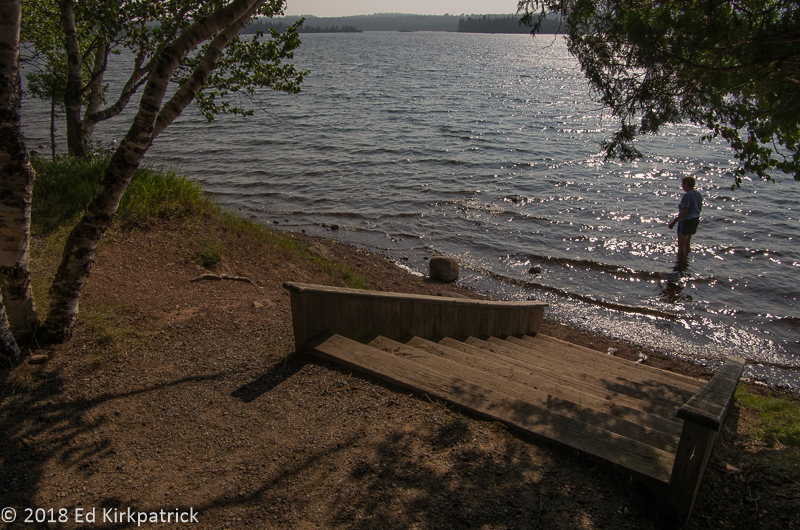 Lake Marie Louise and Marti cooling her heels. The Sun had come out at the end of the day, Yay!

In the morning we drove on down 587 to the end of Sleeping Giant where there’s a very narrow loop through the small summer cottages by Lake Superior.  Then back north up RT 587 to the 5.6 mile long dirt road that goes to the excellent Thunder Bay Lookout.  This is not a road for anything larger than us, (nor wary drivers) and the end is a bit hazardous to tires, but we are so glad we went!

For the first time ever, we actually drove on ROCK. There were major cracks and holes to avoid.  Roadside assistance was not going to be an option…

These are the tallest cliffs in Ontario, a lot of meters above Lake Superior. 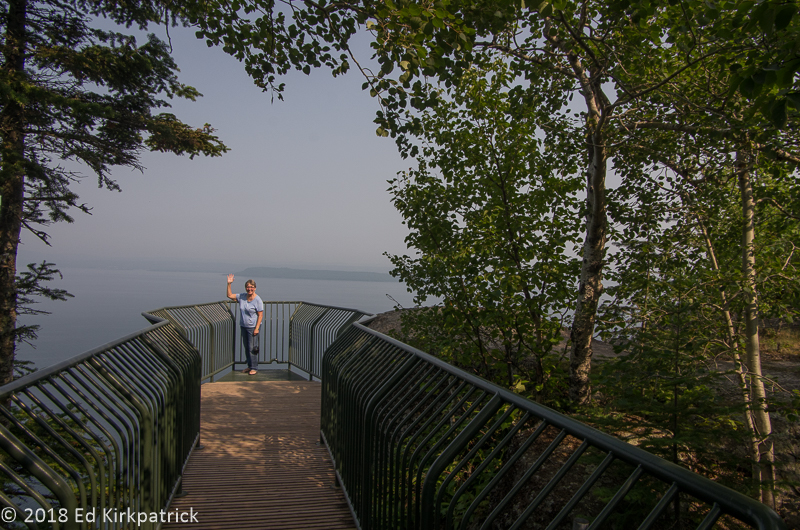 This the cantilevered platform you walk out on in order to see the previous picture.  You have no idea what it took for Marti to go stand out there but boy was it worth it.

After enjoying the view of Thunder Bay and carefully driving back down we headed for Fort William Historical Park just south of the city where we camped for two nights.  NOTE:  Contrary to what the webpage says, the campground is not on the banks of anything and certainly not wilderness, but it is convenient with good wifi. 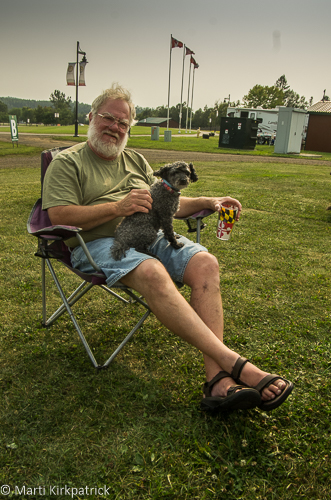 However if your are lucky, you will have good neighbors like we did with Paul and Anita.  If you are really lucky, somebody like little Izzy will come jump in your lap!

The original Fort William (so named in 1807) was established in 1803. The North West Company (Nor’Westers ) had been operating their fur trade out of Grand Portage but after the signing of the Jay Treaty between England and America ceded that area to the US,  Nor’Westers moved to Canada to avoid paying US taxes. Initially located at the mouth of the Kaministiquia River near Lake Superior the site was lost in the 1880’s to railroad tracks and coal piles.  This reconstructed Fort William Historical Site further up the Kaministiquia River opened in 1973 and is most impressive in size and authenticity.

This is the common area in the middle of the fort.  The layout of the buildings, what they looked like and how they were built was all taken from exacting drawings and notes recorded by Lord Melrose at the time.

The Magazine and Armory is only one of two buildings in the complex to have a tin roof.  The reason was to allow any accidental explosions to go up rather than out which would destroy the building. 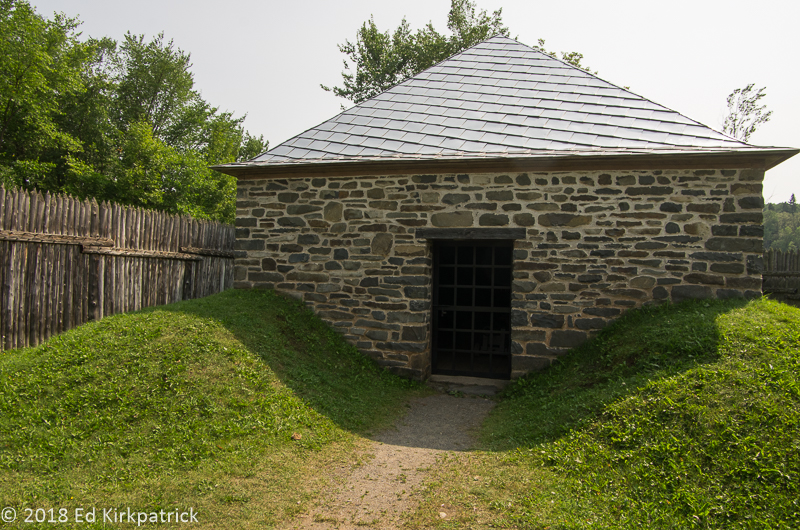 As you can see, the corners of the Armory were strengthened by mounding dirt at the corners to help contain any booms. 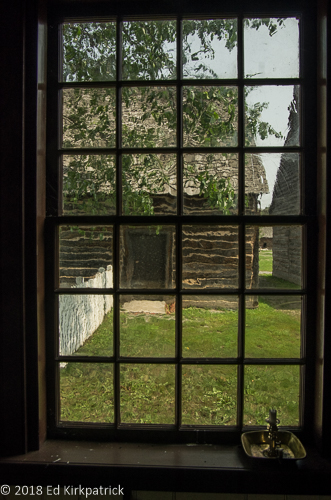 Fort William Historical Park contains 42 reconstructed buildings, a reconstructed Ojibwa village, and a small farm all populated by authentically dressed reenactors. You may notice in this picture that even the window glass used shows the waffling of old glass.

As I mentioned in our last post some of this particular adventure has been about “just to say we’ve been there” and to that end Ed wanted to go to Pickle Lake.  This is the furthest north one can drive in Ontario Province on paved road.

Greetings at Pickle Lake where someone has a sense of humor.  Truth is there is no reason to come here unless you want to fish or hunt.

Another view from above the falls.  The previous photo was taken from the platform on the right hand side of this photo.

We have enjoyed this visit to Canada but are happy to now be back to the States.  We have stayed in many provincial and municipal parks this time and recommend them…HOWEVER….most have varying degrees of leveling issues, some pretty bad.  Most only have electric at some/most sites.  Water is generally available but not always.  Dump stations also may not be available.  Electric, especially in Ontario can be a LONG ways away from your site.  We worked things out but we have lots of leveling blocks, extra water hose and electric cable and in truth aren’t too particular.  So while we do recommend staying in these parks, go prepared and with a sense of humor…or at least a bottle of wine after you’re settled in 🙂

The Williams Gold Mine just east of Marathon has produced nearly 21 million ounces of gold.  That’s a lot of bling.

An interesting detail of pinning a joist of some kind to the vertical end wall of the log buildings.  We have never seen this sort of work before and we used to live in an old log cabin.

Marti is a sucker for baby goats.  This reenactor was admittedly delighted to talk to folks who have actually raised farm animals.  We were equally delighted to chat with her both about period farming practices and her own modern day chicken farming. 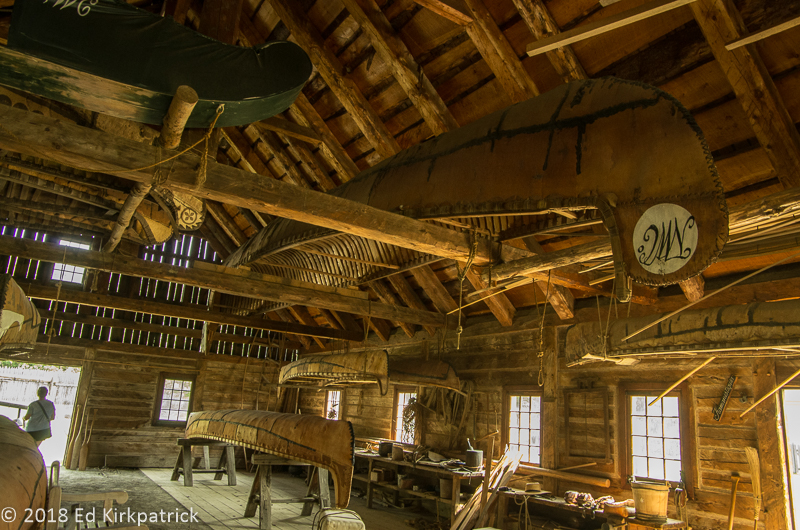 The canoe building shed was just amazing.  This canoe is called a Montreal and had a 5 foot beam, was about 2 feet deep and we think it was 27 feet long.  It was used to transport cargo on the big waters of Lake Superior, Gitchi Gumi. 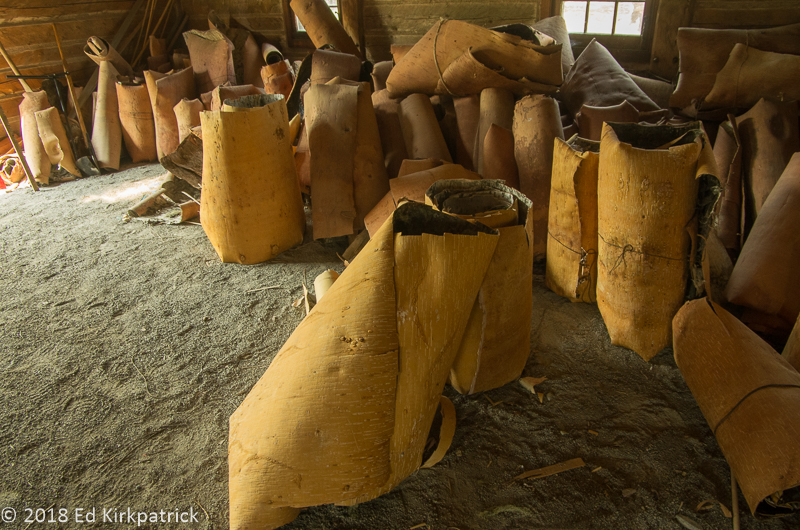 These are rolls of birch bark to be used making the canoes.  Ed estimates each roll to be about 8-10 feet long which would mean the tree it was cut from approached 3 feet in diameter.  The barks were about a quarter inch thick.  Unfortunately, there was nobody in the building to ask but the display was pretty impressive. 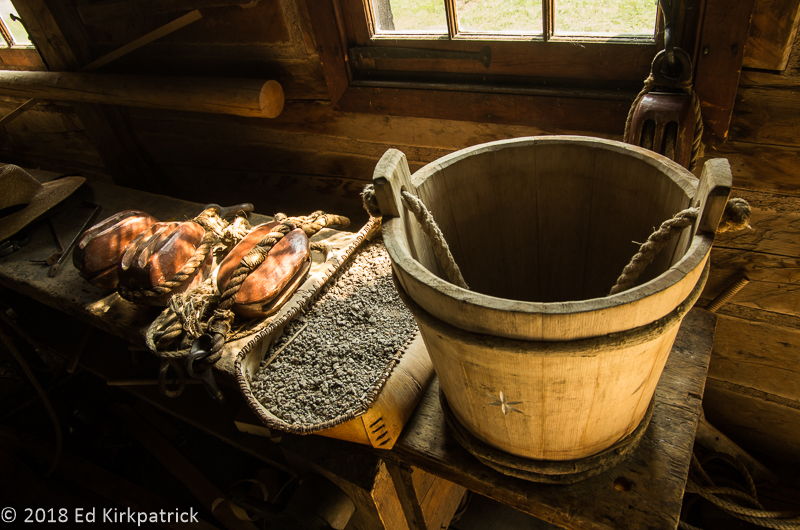 Just some things on a bench in the canoe building.

The barracks at Fort William.

An Anishnawbe encampment just outside the fort.

The furs, basically the whole reason the fort was here, came from the Anishnawbe who traded them for European goods. Throughout the fort there were furs everywhere and they were all real and of very high quality. 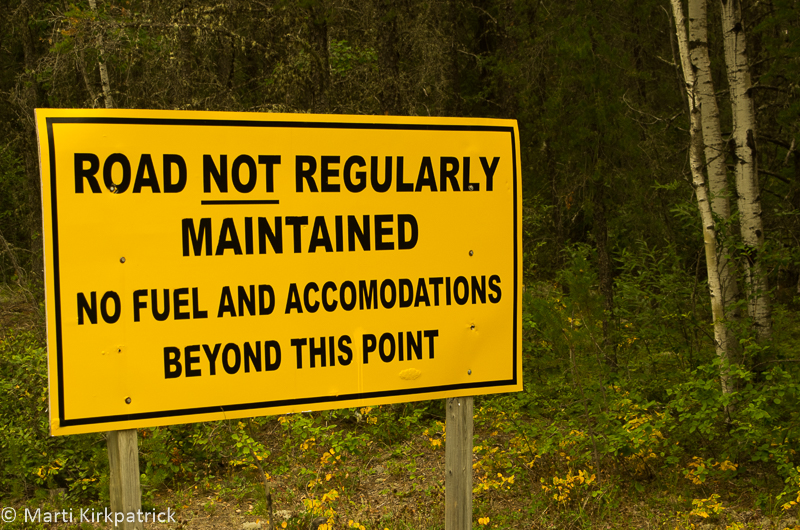 At the end of the paved road at Pickle Lake.  They ain’t kidding around.

We wandered back RT 622 on our way back south from Pickle Lake to camp that night at Kakabeka Falls. This was one of the prettiest roads we encountered in Ontario and a large portion of it, 32KM was nicely graded gravel with some kind of goo on it to keep down the dust. The gooey mud got all over the bottom of the rig. 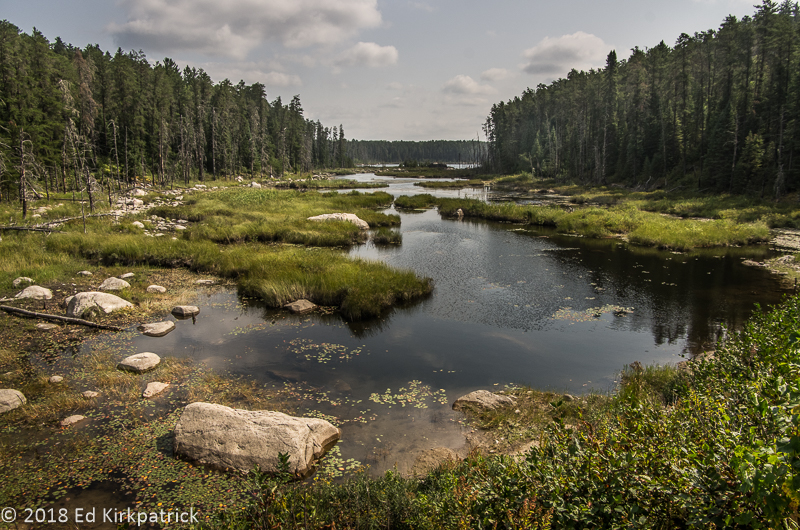 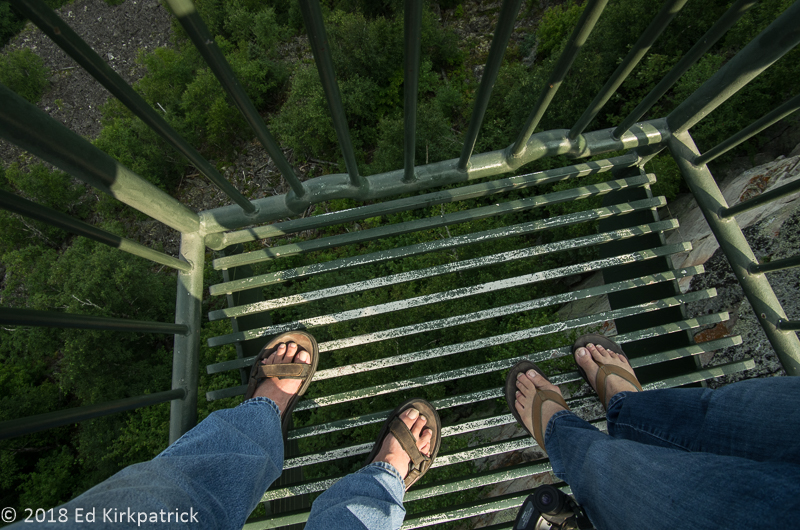 A parting shot from the abyss, the Thunder Bay Lookout at Sleeping Giant Provincial Park.