As Ed commented in his Thanksgiving post we are settled in back “home” in Maryland for the duration (February/March) but we do want to share with you our travels this past Autumn. So without further ado, back to Oregon we go 🙂

Our destination upon leaving Crater Lake was Medford, Oregon, so we headed down State Rt. 62 where I caught a couple of glimpses of something intriguing enough to say “OK, stop please”.   Walking a short way into the woods we came to a very deep and narrow gorge cut into the pumice.  Generally unnoticed and seldom walked, this chasm called Llaos Hallway is in spots 200’ deep while only as wide as one’s outstretched arms.  Formed by the Whitehorse Creek it is a potentially dangerous hike often in water, with falling sand, pebbles and rock and only a few places where it’s possible to get down in much less out.  That being said, when we have more time and have notified others where we are, I would love to explore this unique geological feature. 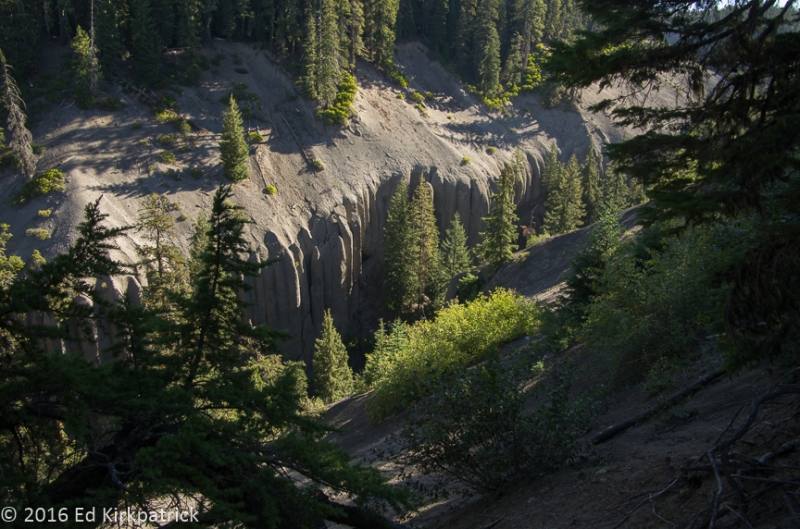 Llaos is the native american’s god of the underworld and lived beneath Mt. Mazama.

A bit further down 62 the road begins to run beside the beautiful Rogue River in the Rogue River National Forest.  We stopped and walked along the Rogue River Gorge trail and then down the road a bit more stopped at Natural Bridge.  Another magnificent Oregon river the Rogue begs a long and leisurely hike but believing we still had a time consuming day ahead in Medford we didn’t go too far.  Once again, we’ll be back someday. 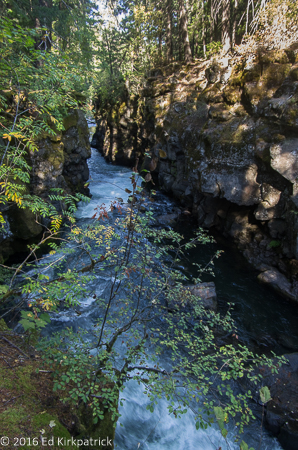 On Ed’s grandmother’s maternal side the family can trace Newland ancestors way back into American history, all the way to the Mayflower.  In our downsizing over three years ago Ed discovered and researched old family letters from and about his 3rd Great Uncle Ethbert F. Newland (don’t you just love that name?) who left home in Webster, NY at the ripe old age of 18 with his older brother Henry for the wild west.  In 1855 he fought and was wounded in the Rogue Indian Wars. Later he worked as a teamster hauling freight to the California gold miners. On becoming quite ill he headed for San Francisco where he died of consumption (TB) at age 29 with $3,000 worth of gold in his possession! ( $55,000 in today’s money). In the early 1900’s in a rather amazing act of greed for the prime real estate of both current, abandoned or filled cemeteries, he was one of thousands disinterred and reburied in mass graves outside of the city!  Before all of this in 1855, shortly before mustering into the militia, Ethbert, courtesy of the Donation Act of Congress, acquired 160 acres of land near Table Rock, Jackson County, Oregon Territory, eight miles outside present day Medford.

Ed had done his research and located the land plot just by Newland Road and via Google Earth discovered it was now the site of a sewage treatment plant! 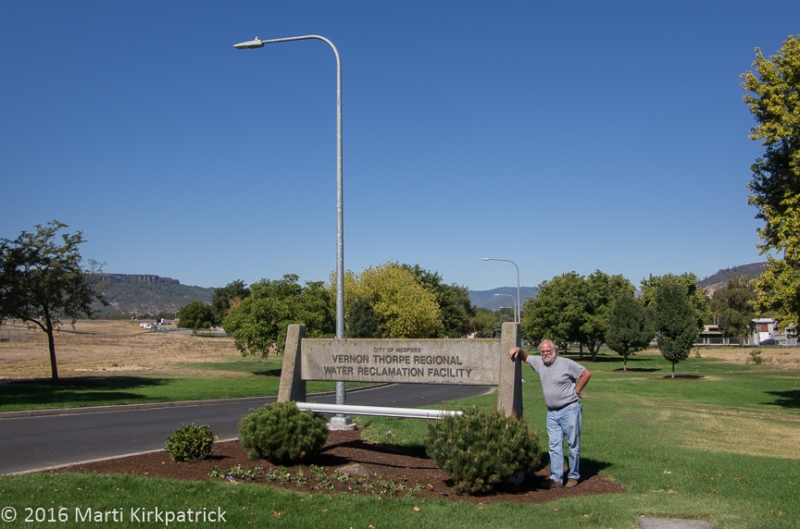 Not a particularly auspicious outcome for Ethbert’s land claim.

Oh well, we still wanted to check the land records in Medford the Jackson County seat. Figuring it might be a long day of finding the correct office and searching microfilm and/or old books we had hurried down the road.  Surprise!, not only was our first stop the correct office the records were located right there AND under “N” the first name in the deeds record was Ethbert F. Newland!!  In and out in 15 minutes, land sale record copies in hand, we of course went to the 4 Daughters Irish Pub where Ed had the best Reuben sandwich he’s had in years 🙂 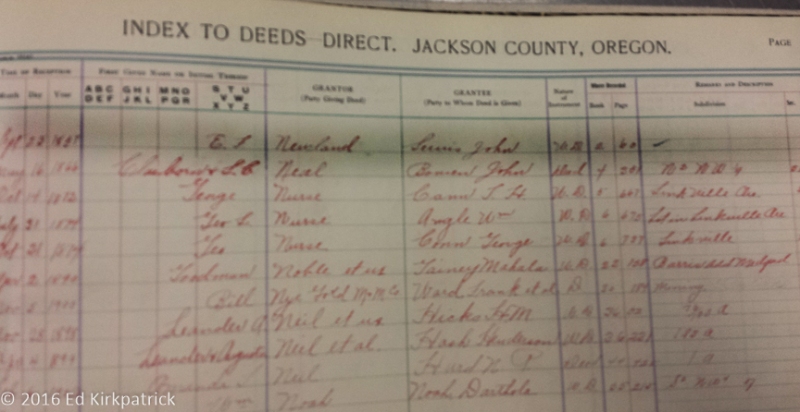 Sorry about the blurry photo but it was dim and my hands were unsteady.

Next day we headed north on Interstate 5 to State Rt. 99 to 42W and the Pacific.  This was a really pretty drive through steep mountains with next to no valleys, reminding us of West Virginia, until further west where it opens up more.  Almost all logging country, we passed through the town of Dillard which is pretty much Roseburg Lumber where they were cutting and making veneer sheets for making plywood.  This is a huge operation with train-car loads going on forever filled with these sheets.  They’re looking for workers if you want a job in some pretty country!

That night we stayed at Bullards Beach State Park two miles north of Bandon OR and we recommend this nice campground even if the beach is about a mile away.  The attraction for us was the Coquille River Lighthouse. First lit in February 1896 it now has a solar powered light although truth is an automated beacon at the end of the south jetty is what ships “watch” for now. 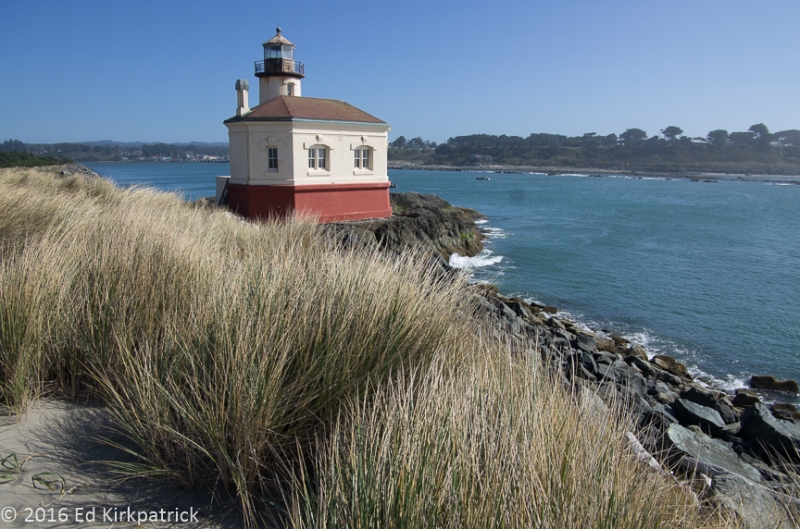 The Coquille River Lighthouse.  Coquille is pronounced Ko-kwell, not the French pronunciation of Ko-kwee.

Popping into old Bandon we stopped for coffee and pastries before heading down the Beach Loop Road.  When coming this direction do not take the recommended Pacific Coast Highway 101, take Beach Loop Rd! 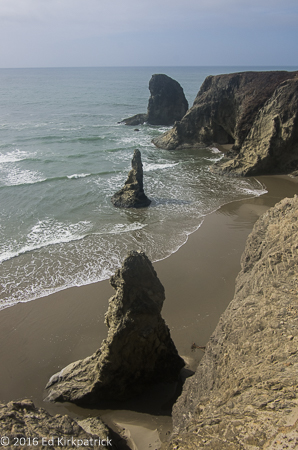 We stopped over and over again to marvel at the view. Then the road joins back up with 101 and we scooted on down to where we planned to camp at Cape Blanco State Park. Our first stop at the park was the Historic Hughes House & Ranch.   The Sixes River flows into the Pacific here just north of Cape Blanco and in the early 1860’s Irish settler Patrick Hughes and his wife Jane choose this lush valley for their homestead.  Steadily acquiring land until he held more than 1,800 acres their very prosperous dairy produced butter that was shipped by sea to San Francisco.  In 1898 Patrick had a large and lovely home built on a hillside and we enjoyed seeing it. 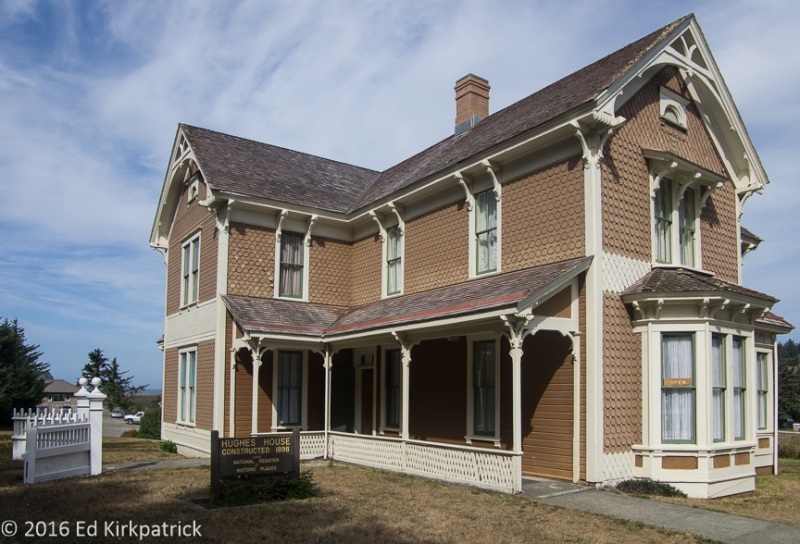 The Hughes House just like the sign says. The semicircular fish-scale and reverse-fish-scale patterns in the siding have a close-up below. 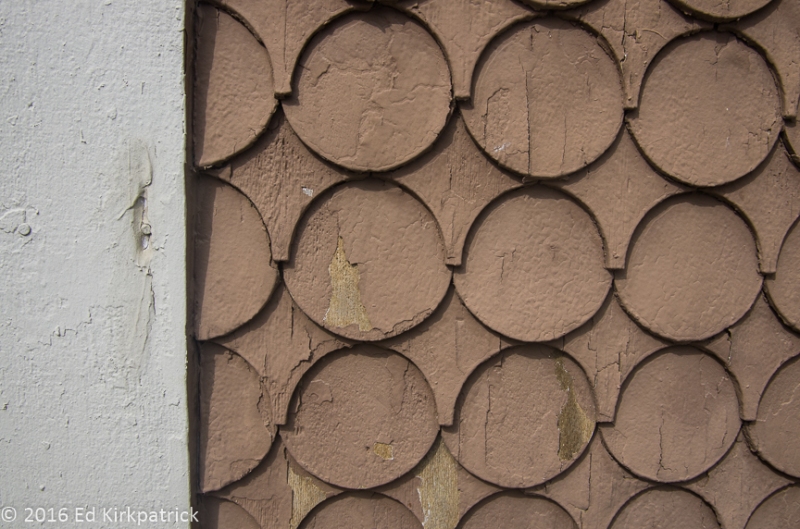 Marti and I are still “discussing” how these shapes are made…

Next stop was out to the Cape Blanco Lighthouse which was built in 1870.  The oldest continuing working lighthouse in Oregon, the Fresnel lens and sunlight gave Ed a great opportunity. 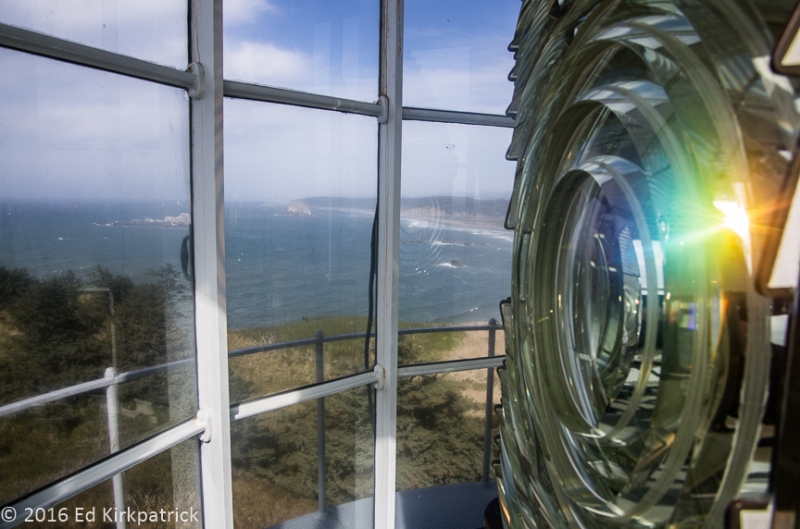 The Fresnel lens was made in Paris, France by Henry~Lepaute.

Put this whole day on your MVL (Must Visit List) and if camping be sure to stop here for the night, it’s a lovely campground. Oh, and I will point out this day’s road trip covered a whopping 49 miles, an all day adventure!

Our last day in Oregon (and the last day of September) driving on down 101 we stopped often to watch the gray whales migrating down the coast.  In fact we got pretty adept at spotting their plume of watery mist as they grabbed a breath of air. Even though it was once again rather gray and damp we stopped at Sisters Rock State Recreation Site.  We hiked down the sandy trail to two of three Sisters, large rock monoliths (the third is surrounded by water) and I climbed down into the mouth of a large sea cave.  The noise of the ocean crashing in and out was wonderful!   We also stopped at Arch Rock and did the short but STEEP hike at Indian Sands, don’t bother with this one, before checking into Harris Beach State Park at Brookings.

On the trail down to the three Sisters.  We got wet in a sudden rainshower on the way back.

Oregon is truly beautiful and diverse and for RV folks it has a lot of really great campgrounds. All in all, except for the fact it might explode someday, Ed has put Oregon in his Top 5 States List, Maine is still the winner. Yup, go ahead and put the whole place on your MVL!

This the Natural Bridge over the Rogue River.  The river flows in (lower left) a lava tube about 200 ft long and flows out (upper right). It’s the only crossing of the river besides bridges and was used by natives as well as settlers.  Ethbert may have utilized this crossing carrying freight to the miners. 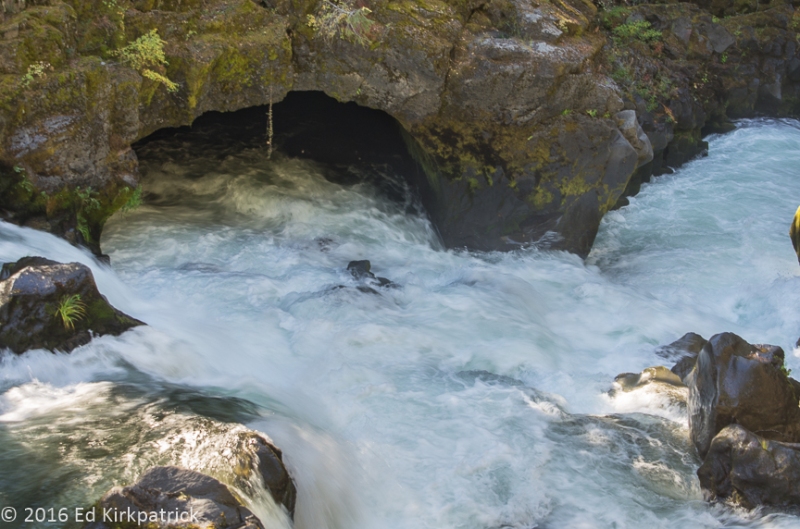 Here’s a blocked lava tube on the Rogue that the water only swirls into and around. 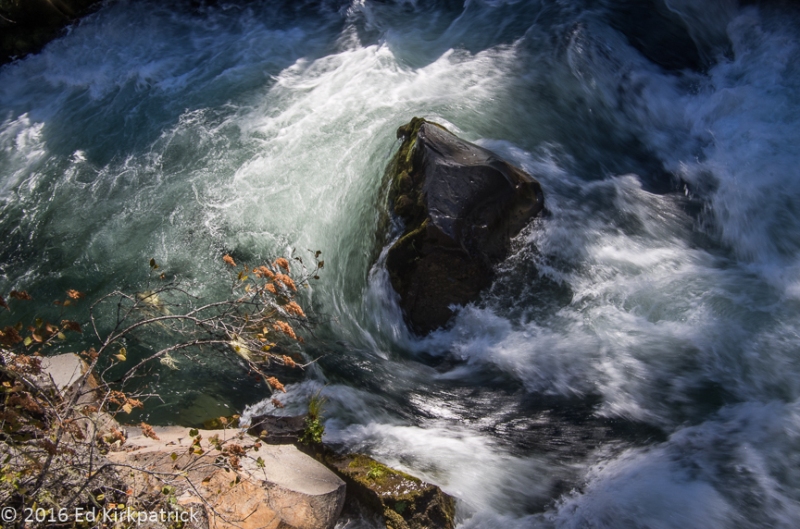 Lots of pretty waterfalls and rapids on the Rogue. 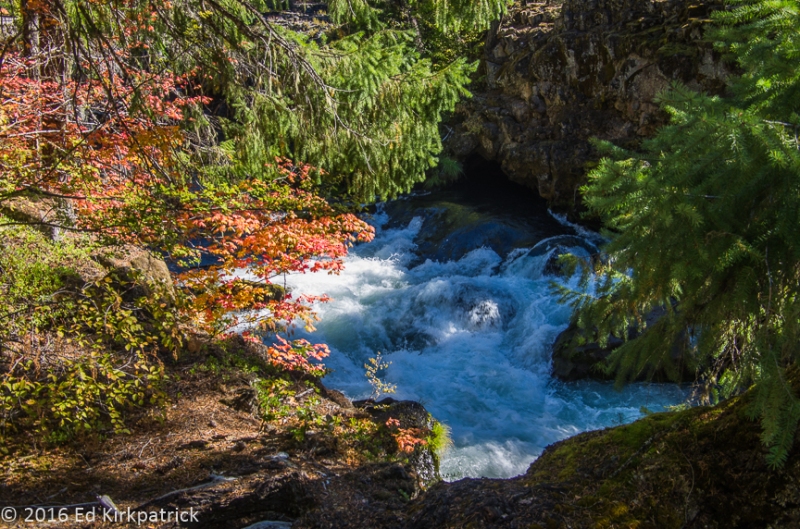 This is the downstream exit of the lava tube that forms the natural bridge. 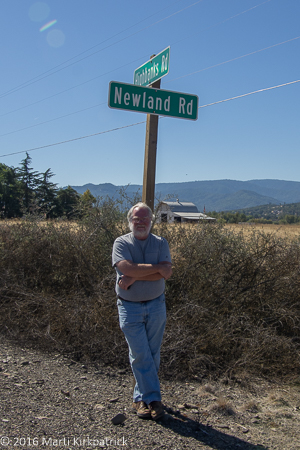 The jetties where the Coquille River empties into the Pacific at Bandon, Oregon.  Can you spot the lighthouse across the river? 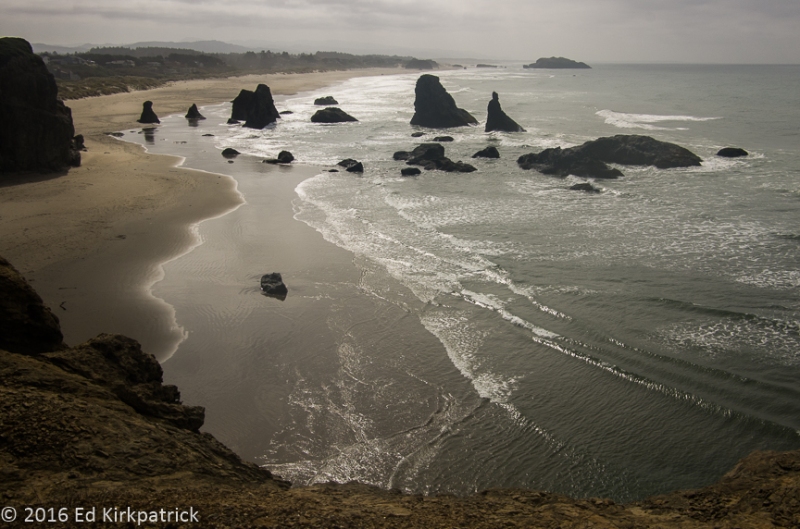 The Witches Hat at the Bandon Sea Stacks near Bandon, Oregon from the Beach Loop Road. 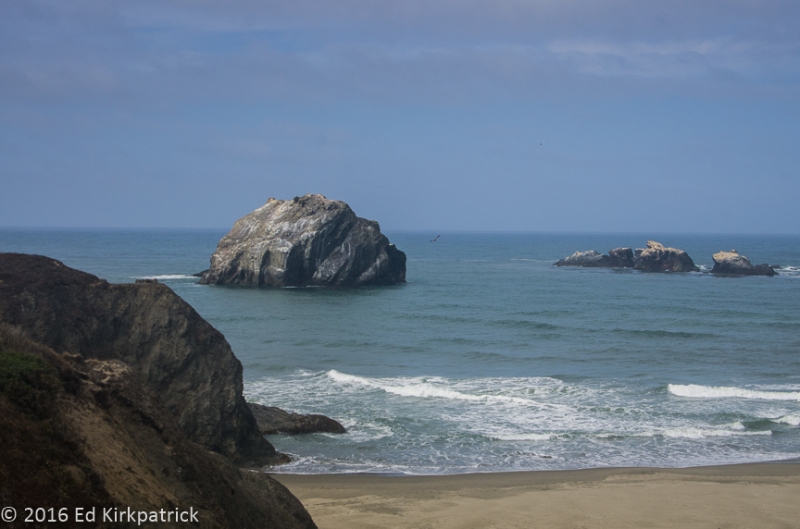 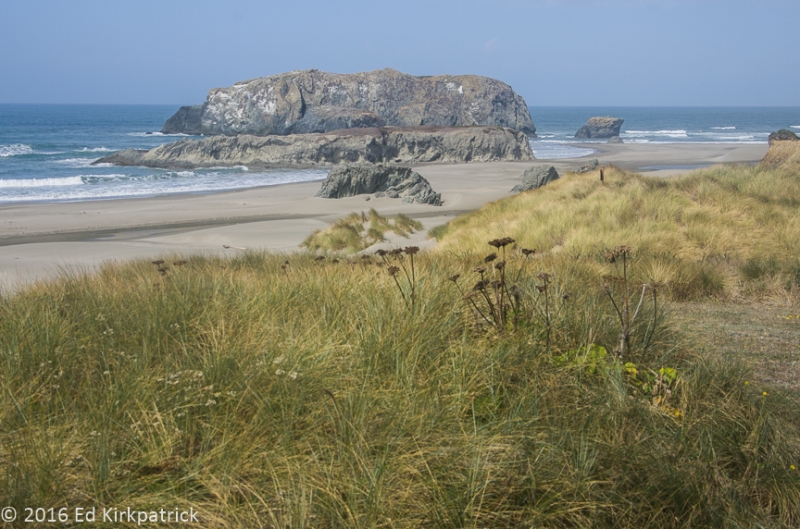 Haystack Rock from the Beach Loop Road in Bandon. 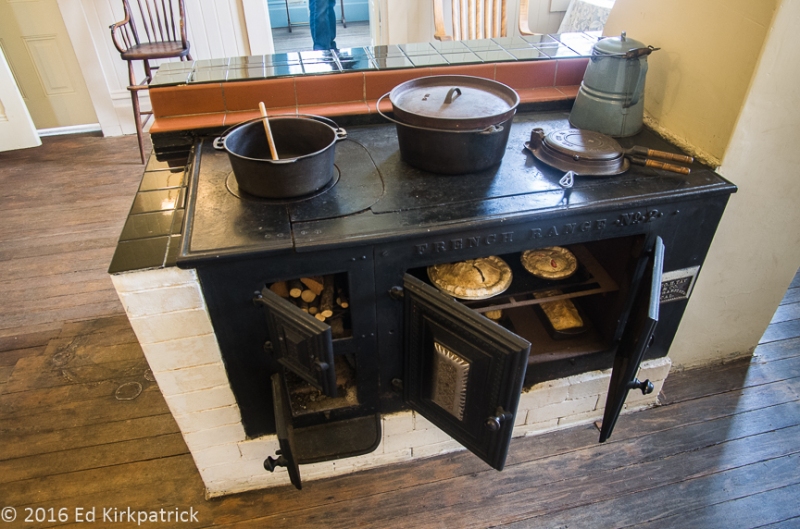 Up on Cape Blanco just by the lighthouse we spied this doe. 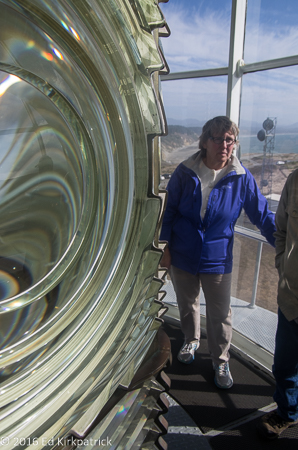 Using Marti for scale to show the size of the Fresnel lens in the Cape Blanco Lighthouse.  In the background you can see the modern day communications gear. 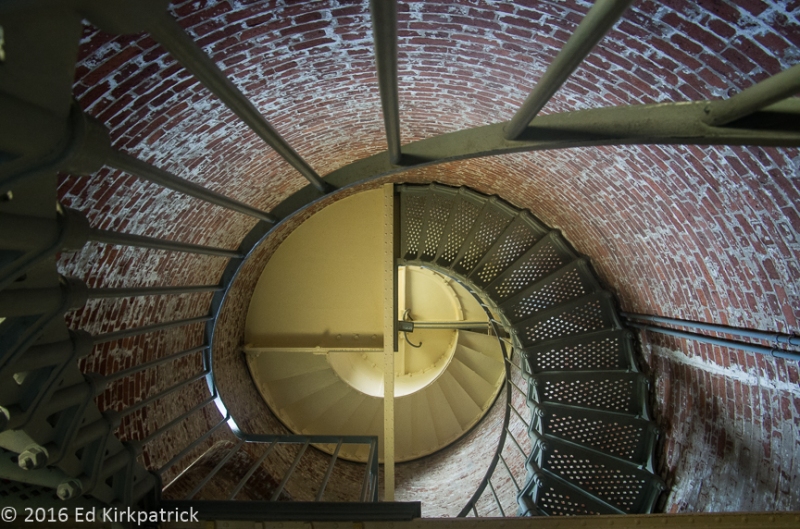 I loved the spiral stairway up into the lens room of the lighthouse. 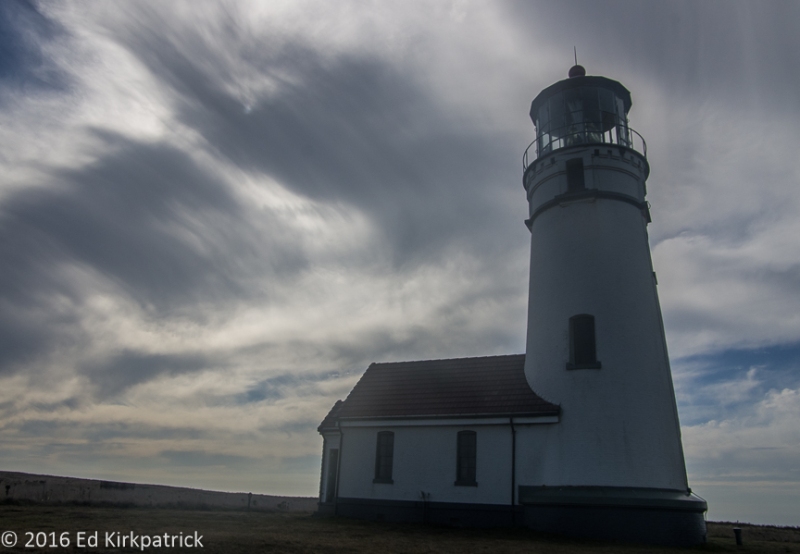 And the Cape Blanco Lighthouse itself.  It was blowing a gale on the point as is the usual weather there.

The view looking south from the Cape. 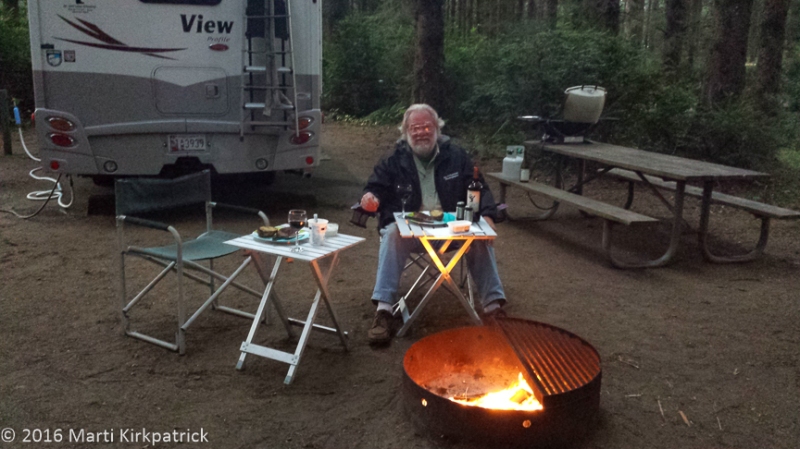 As hard as it was blowing on the Cape, down here in the campground a 1/4 mile away it was fairly calm so we had a fire and enjoyed dinner fireside. 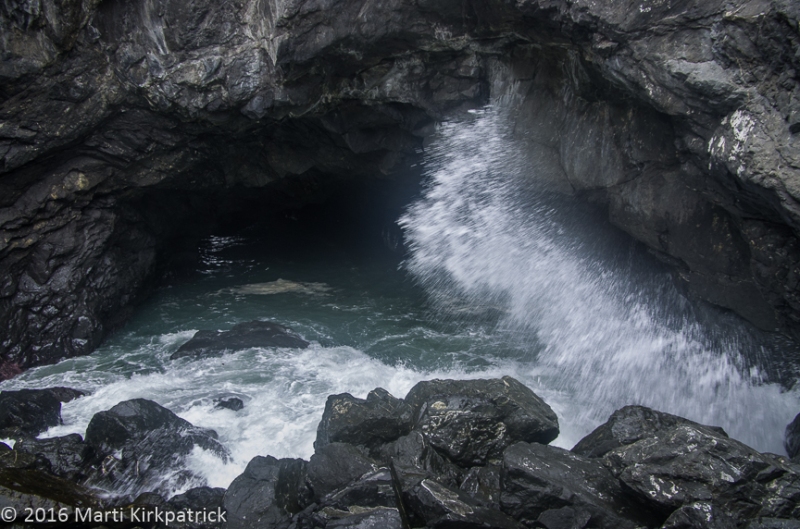 Marti climbed down into the mouth of the sea cave at Sisters Rock to get a great shot of the waves surging in through the entrance on the other side.  You can see light reflected on the water from that opening. 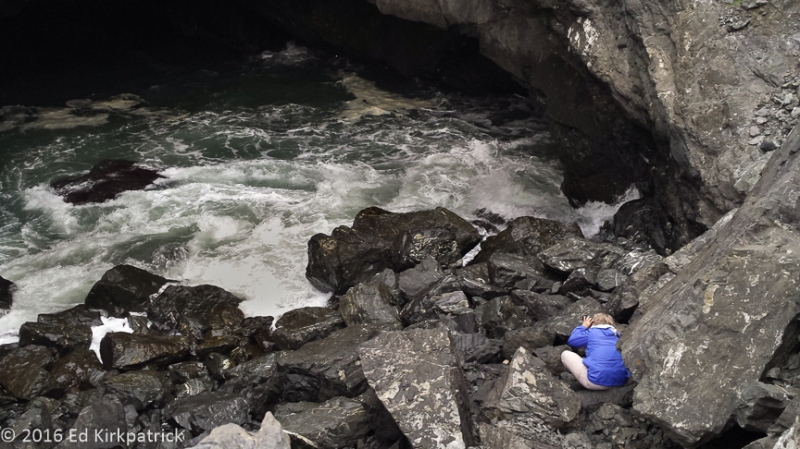 I do not climb down slippery rocks. 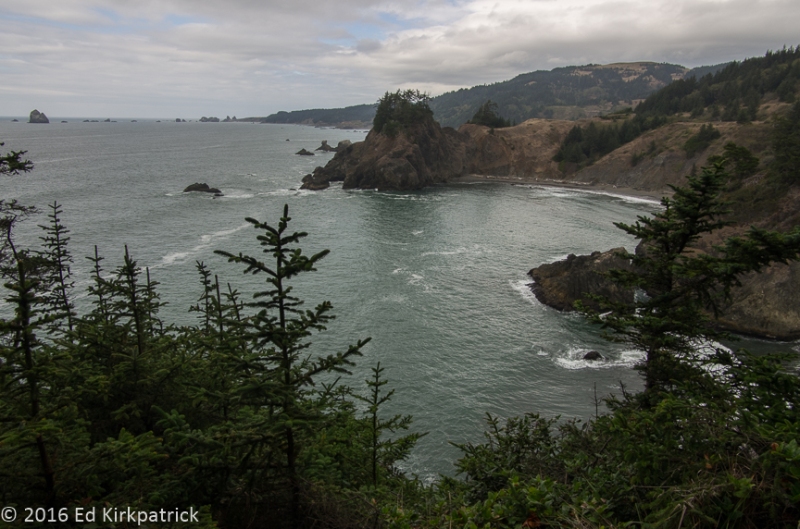 Oregon’s coast is just lovely everywhere which means we can’t remember just where this place is or its name. 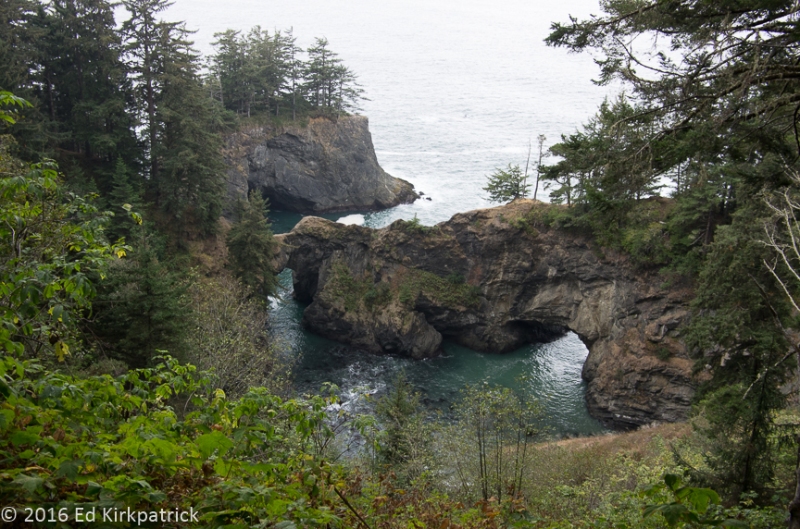