Needing to stop off in Oregon’s state capital Salem to get our 60,000 mile Sprinter service (the chassis is a Mercedes Sprinter and the coach is Winnebago) afterwards we had a bit of a walk around town and good lunch at the bar in the Table FIVE 08  restaurant.  The next day we left Salem for the cute little town of Sisters via the very pretty State Route 22E to US 20.  This route is almost entirely in both the Willamette and Deschutes National Forests where the huge B&B Complex Fires in August & September of 2003 burned almost 91,000 acres killing over half the trees. 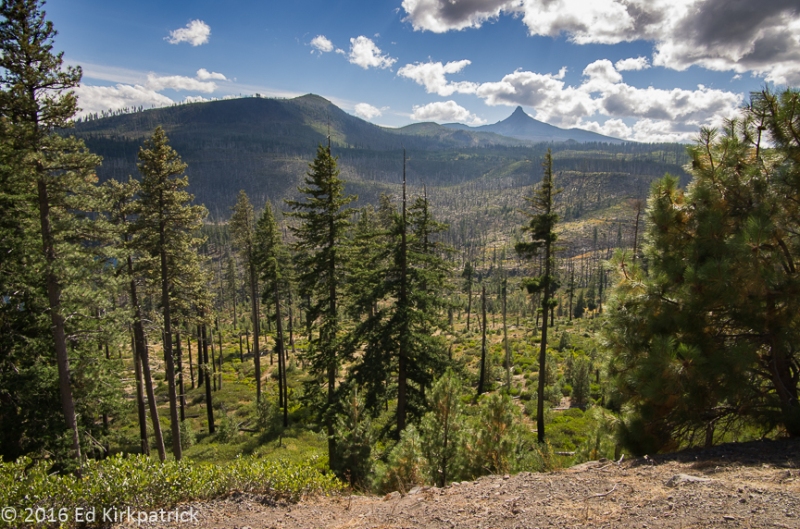 As far as your eye can see, most of those trees are dead.  Mt. Washington is the pointy peak in the distance. 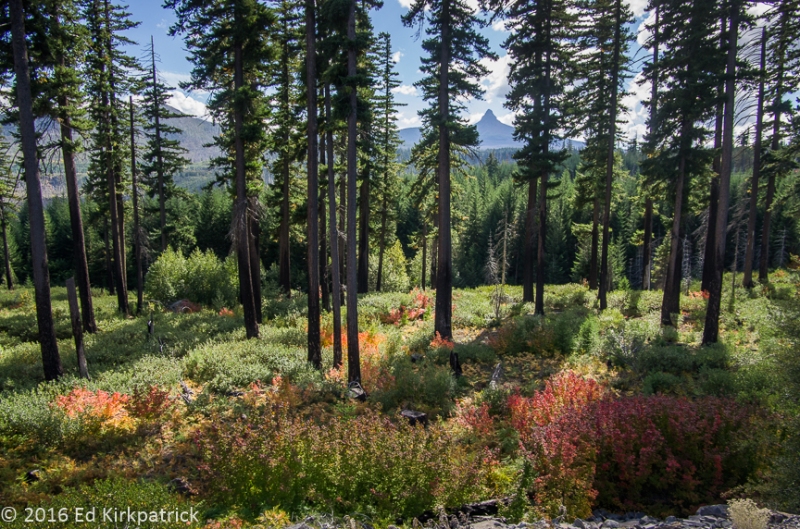 Slowly over time the forest regrows.

After spending the night at the Sisters Creekside Campground which is in a lovely woods, on the edge of town and walking distance to restaurants, shops and Sisters Bakery, (YUM!!)  we drove west on the beautiful McKenzie Pass-Santiam Pass National Scenic Byway – St. Rt. 242.  This road separates the Mount Washington and Three Sisters Wilderness areas and at the McKenzie Summit is the Dee Wright Observatory where the view across 65 square miles of lava is spectacular!

Looking south from the Dee Wright Observatory, at 5187 ft. elevation,  two of the three Sisters still have snowfields. 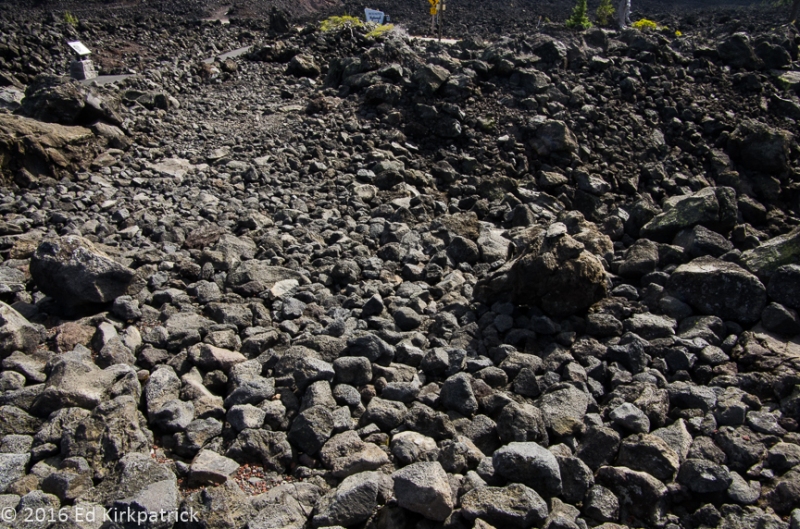 The lighter area center/left is a portion of the treacherous McKenzie Salt Springs and Deschutes Wagon Road constructed during the period between 1866 and 1872 and it followed the original Indian trail across the lava fields.

Route 242 ends at St. Rt. 126 where we headed north following the magnificent McKenzie River.  Remarkably clear and an amazing color the McKenzie is one of the prettiest rivers we’ve seen.  There’s a very popular 26 mile hiking/biking trail running along the river and we did a tiny bit of it and would love to do more someday. 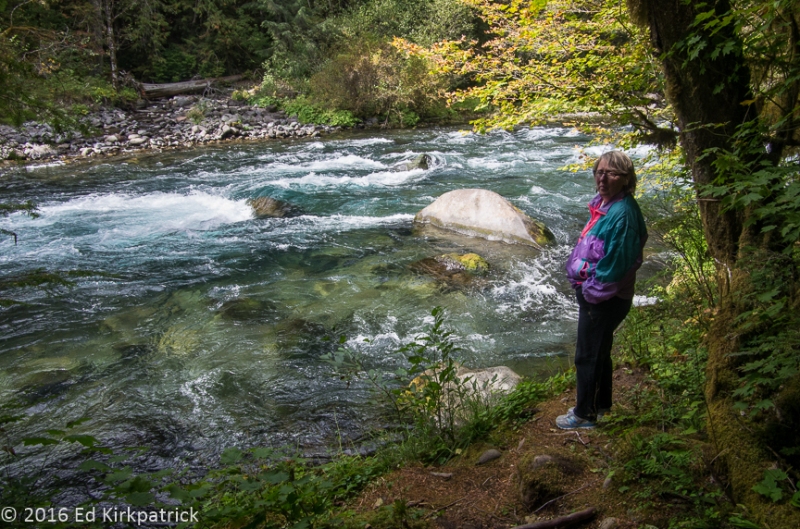 Along the McKenzie River.  Note the turquoise blue (not photoshopped) and the clarity of the water. Marti says she was actually enjoying herself very much despite the frown. 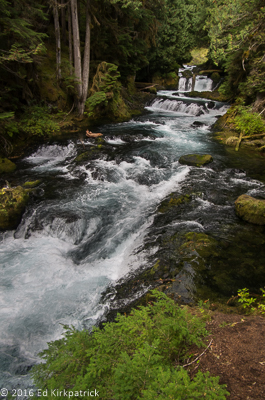 Waterfalls along the McKenzie River Trail.

At Santiam Junction 126 joins with US20 where we headed back to Sisters.  If you’re ever close to this area I suggest you put this drive on your MVL (Must Visit List).

Moving down the road about 30 miles to Crown Villa RV Resort in Bend we settled in at one of the nicest commercial RV parks ever.  Not cheap, but lots of space in a pretty treed location with the nicest laundry I’ve used to date, make note RV friends!   Unfortunately the weather became wet and generally unpleasant so we decided to poke around Bend which is considered by many folks as being in the USA top 10 places to live.  We had a damp picnic lunch in Drake Park which has some lovely old homes surrounding it and then walked around Downtown Bend which has the Red Chair Gallery where we may have bought some things 🙂  In truth we barely touched town, but what we saw was very nice and probably worth a better look someday. This trip however we were more interested in exploring the immense amount of volcanic landscape here.

I was especially looking forward to seeing the Lava River Cave located in the  Newberry National Volcanic Monument.  To our amazement this is a self guided mile long hike (one way) through an UNLIT lava tube!  No hard hats, no checking to see if you’ve got a flashlight (they do rent very good torches) no Forest Service personnel inside, just enjoy yourself!  We keep asking each other where the liability lawyers were locked up because you’d never see this back home 🙂 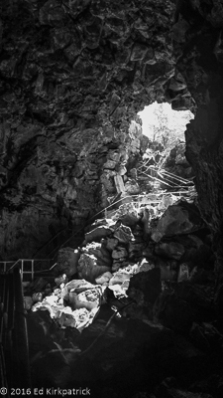 Inside the entrance to the Lava Tube Cave looking out. 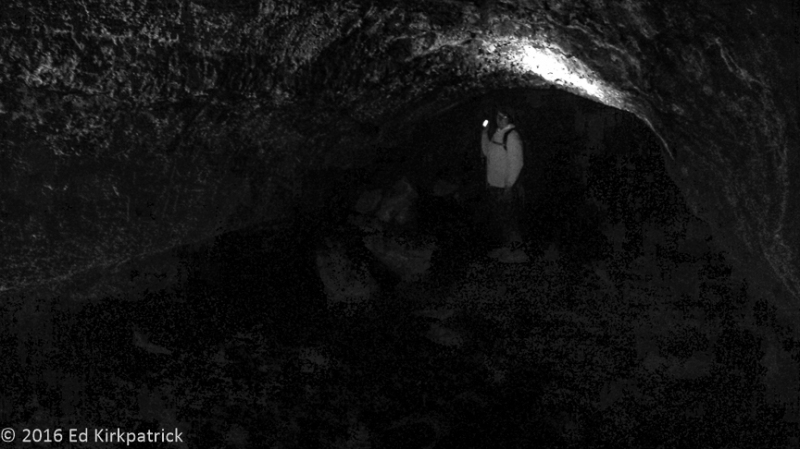 It gets beyond real dark in there.  Like any cave it is total blackness.  The ceiling is bend down low in spots.  In other spots it’s very high too.  I made these cave photos black and white due to the poor color rendition in such low light plus they were taken with my phone!

Next on the “lava list” was a walk at Big Obsidian Flow also in the Newberry NVM.  Ed and I have been to lots of lava fields in many states but we have rarely seen any obsidian and to see a really large area covered with this volcanic glass was sooo cool! As much as I wanted to, I followed the rules and did not help myself to a great big chunk of it 🙂 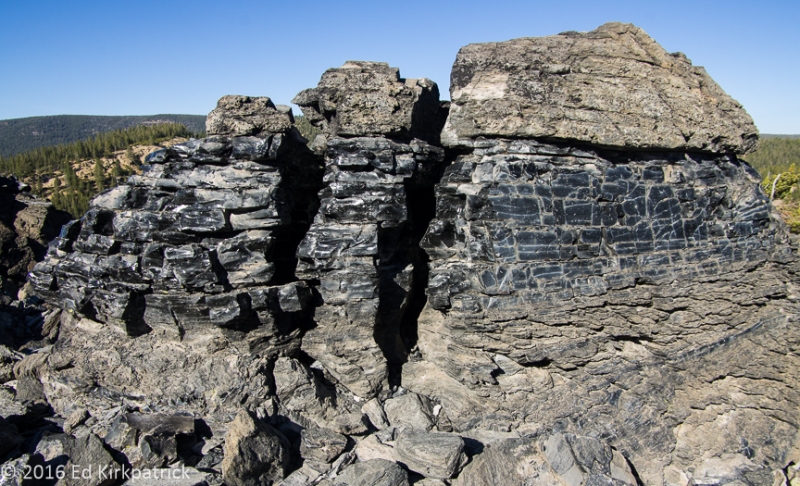 The shiny black layer is obsidian, volcanic glass formed by the rapid cooling of lava with minimal crystal growth. Chips of it are extremely sharp.  The Indians used it for arrow and spear points and knives and modern surgeons sometimes use a scalpel fashioned from obsidian that is much sharper than the steel scalpels.

With the sun at last fully back (it was almost hot), we drove part of the Cascade Lakes National Scenic Byway.  Along this route is Sparks Lake which Oregon’s Photographer Laureate Ray Atkeson called the prettiest place in the state. With this recommendation we bounced out the dirt NF400 (National Forest Rd) to hike the Ray Atkeson Loop Trail.  It was a lovely 2.5 mile walk with great views and of course lots of lava. The only negative was maybe the worst allergy attack I have ever had!  There’s some kind of evergreen out here that my nose does NOT like.

Sparks Lake with South Sister reflected on the Ray Atkeson Trail. Note the lava in the foreground. 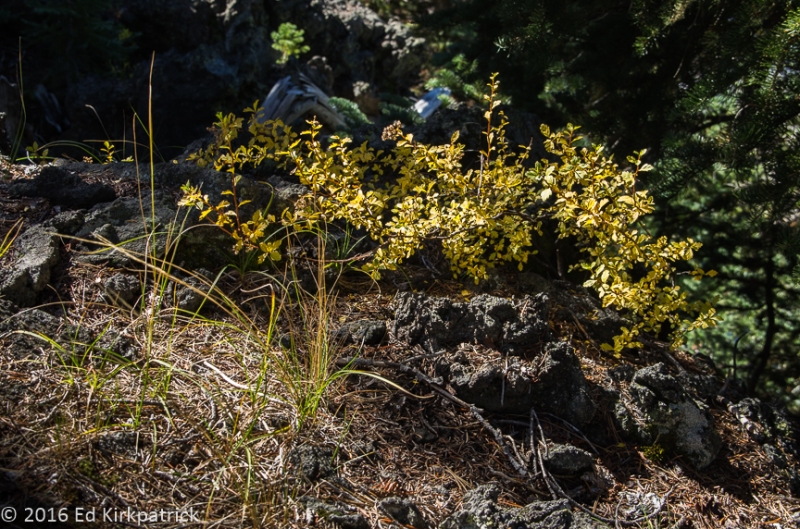 The Fall colors were really pretty contrasted with the lava along the trail.

As I have said in other posts I saw a lot of the west back in 1962 and some of those places have always held a special spot in my heart, one of those is Crater Lake.  Back then we had the place pretty much to ourselves. Dad led us on a hike down to the water and I used my hands to drink out of this incredible pristine volcanic caldera.

Wizard Island in Crater Lake.  The island is itself a cinder cone, a remnant of a later eruption after the caldera collapsed. The lake is at its deepest 1946 ft. and is the deepest lake in the USA. It was entirely filled by rain and snow melt.

Pretty much we think you should put this whole post on your MVL! 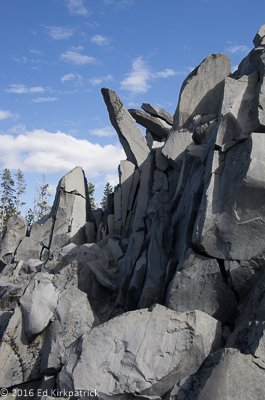 Some lavas that are very brittle exfoliate into these chunks due to freezing and thawing of ice in cracks. 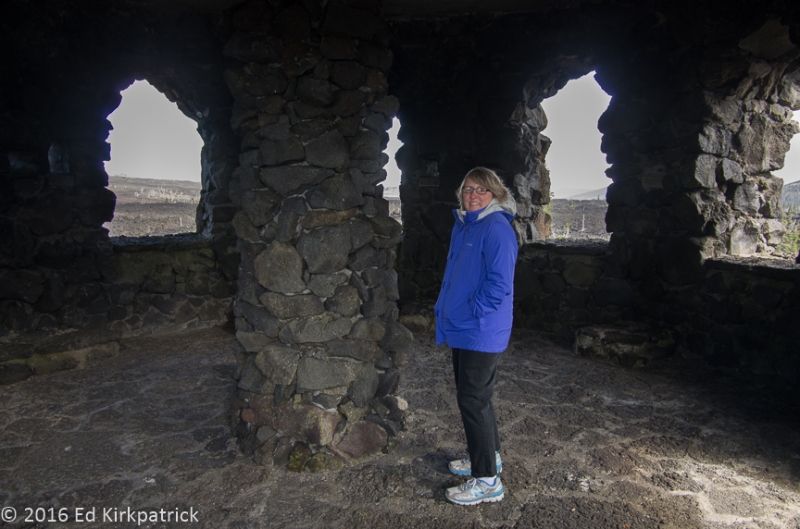 Marti inside the Dee Wright Observatory which was built out of the surrounding lava rocks by the CCC in 1935. Each opening has a plaque beside it saying what mountain is viewed through it.  It was also very cold. 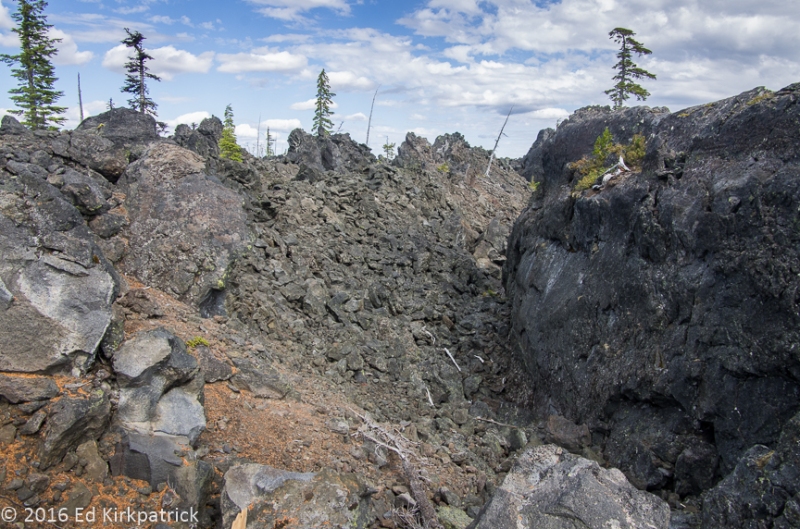 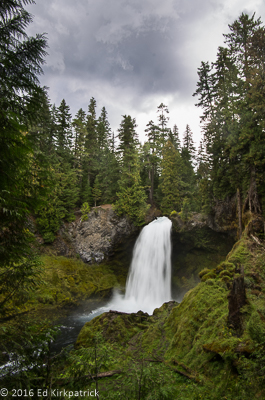 One of many waterfalls on the McKenzie River Trail. 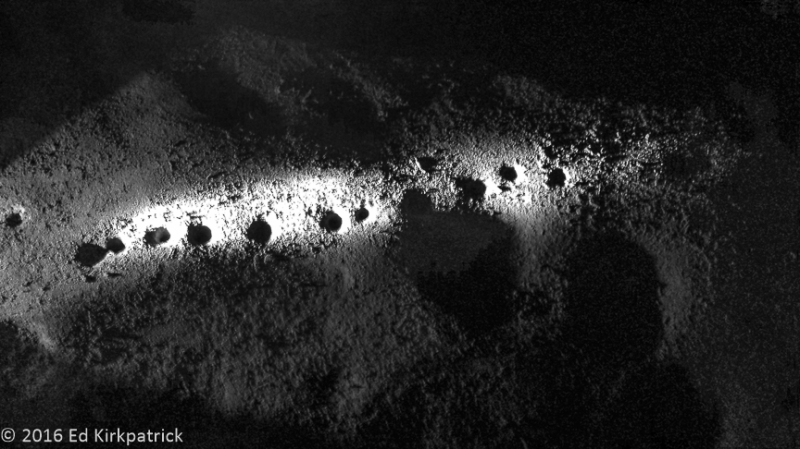 The lava tube cave fills with sand and dirt particles washed in by water seeping through the rock.  The floor was covered with drip holes in all kinds of patterns and lines. 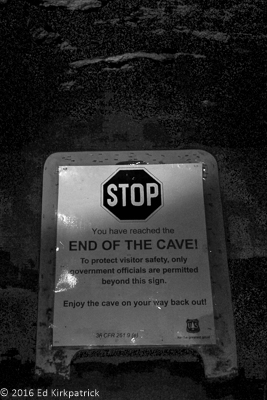 In case you missed it.  The cave is filled with rock and sandy dirt and is currently impassable. 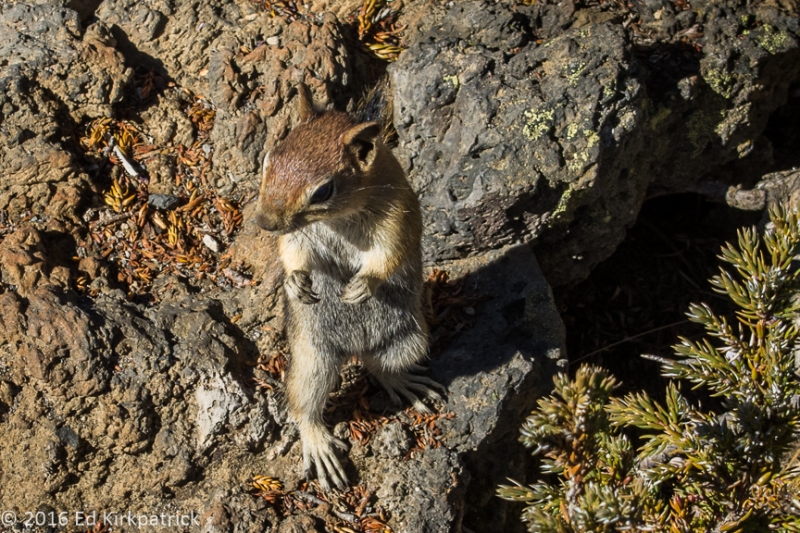 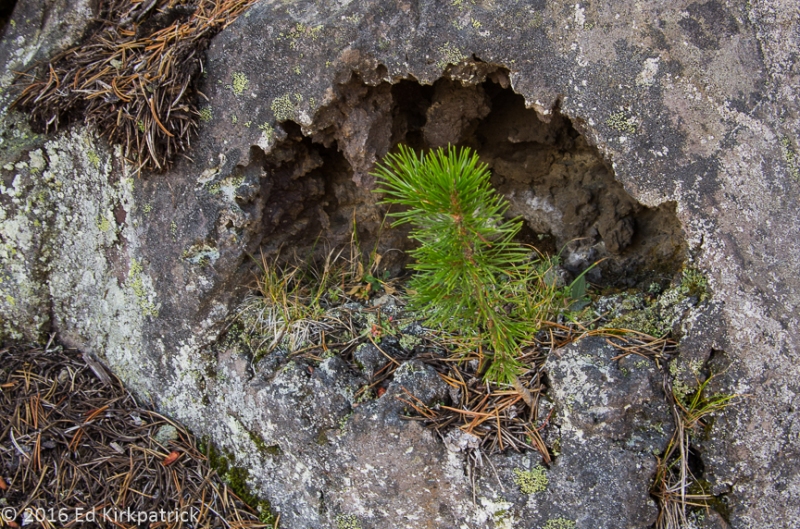 Trees will sprout anywhere there is dirt and moisture. Marti really thought this one was cute. 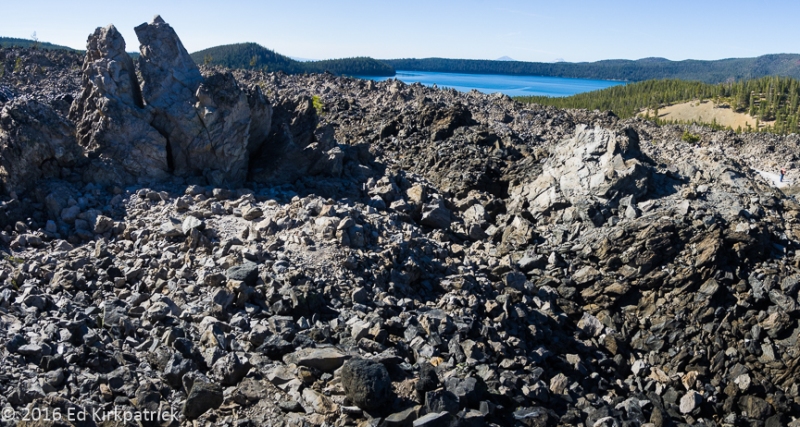 The Big Obsidian Flow in the Newberry National Volcanic Monument. Seated at the top near here, we had a long chat with some very nice young people who were back in the parking lot before us.  As I passed them they handed me a half six pack of various Oregon beers.  They said they really enjoyed talking with us and thought I would like these.  They were right! 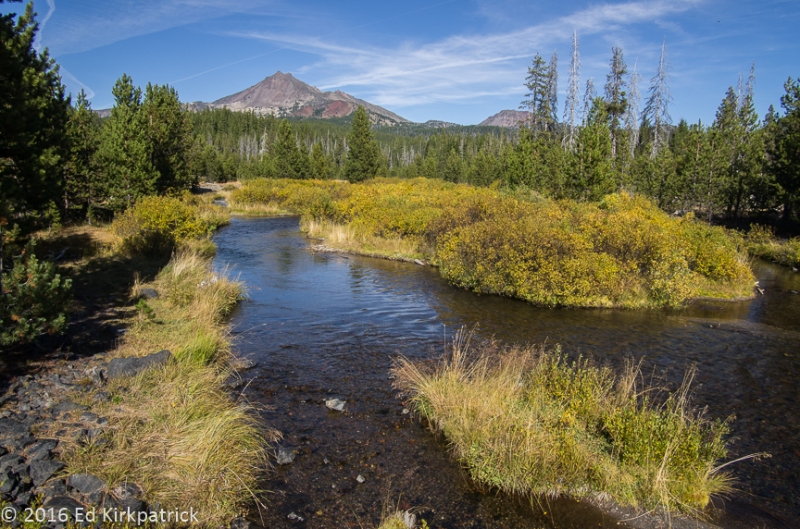 A nice mountain view across the meadow and stream on the road to Sparks Lake. 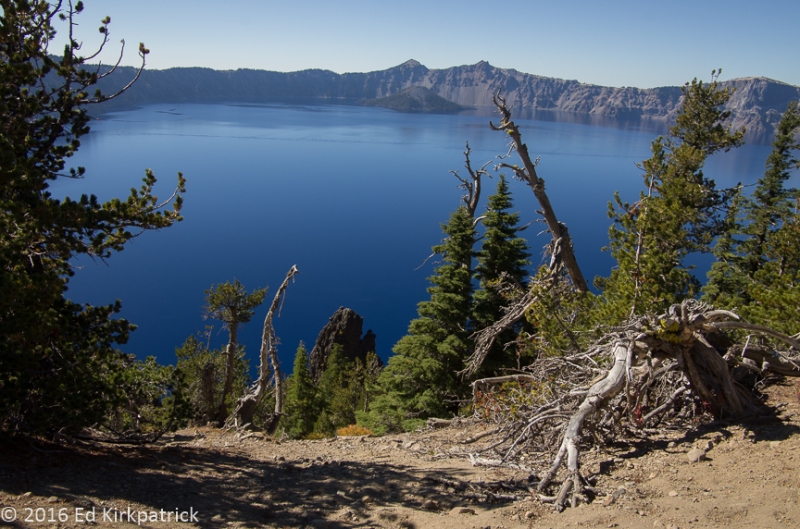 Marti loves these two stick figures, one walking, one crawling up from Crater Lake. She’s a little nuts, but I will keep her anyway. 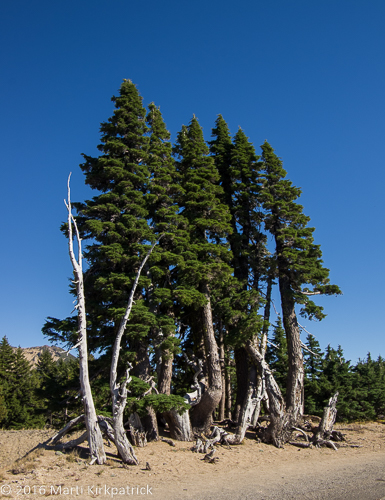 She likes these trees too…

The orange rock feature on the right is called Pumice Castle above Crater Lake.

The Rim Road travels away a bit from the crater in some places.   Here it passes Mt. Scott which for obvious reasons we had to have this photo.  Mt. Scott is an extinct volcano that was once larger (before it blew up too) than Mt. Mazama which formed Crater Lake when it collapsed. 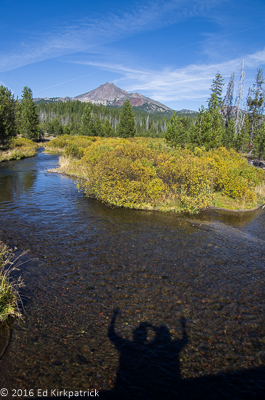