With apologies….“Well, I’m a standing on a corner in Winslow, Arizona and such a fine sight to see It’s an ED, my Lord, BY a flatbed Ford slowin’ down to take a look at me….”

On our way east from Flagstaff to our next RV Park and sightseeing destinations Ed said we had to take a swing off of I40 to drop into Winslow so he could stand on a corner. Imagine our surprise to find the only thing going on in this now mostly boarded up town is “THE CORNER”.   He thought he was being really clever.  Turns out everybody’s doing it!   Still lots of fun!

Standing On The Corner

From the day we saw the movie Starman (starring Jeff Bridges & Karen Allen, 1984) we’ve wanted to see Meteor Crater for ourselves. WOW!! is a polite way to describe this amazing hole in the ground! (Truth…..that’s not what I said). Hurtling along at about 26,000 miles per hour 50,000 years ago, a meteorite, or perhaps a dense cluster of meteorites, estimated to have been about 150 feet across, weighing several hundred thousand tons passed through our atmosphere in a matter of seconds crashing into the earth here.

The resulting crater is 700 feet deep and over 4,000 feet across! During its formation, over 175 million tons of limestone and sandstone were abruptly thrown out to form a blanket of debris around the crater for over a mile. Fragments of rock and iron-nickel, some as large as a few feet across, were thrown as far as several miles. The end result today is a fascinating and astonishingly cool scientific reminder of how devastingly fast our little planet can be altered. Definitely put this on your MVL, (must visit list).

About 18 miles east of Holbrook AZ off Rt. 180 is the entrance to the 28 mile drive through Petrified Forest National Park and the southern edge of the Painted Desert. 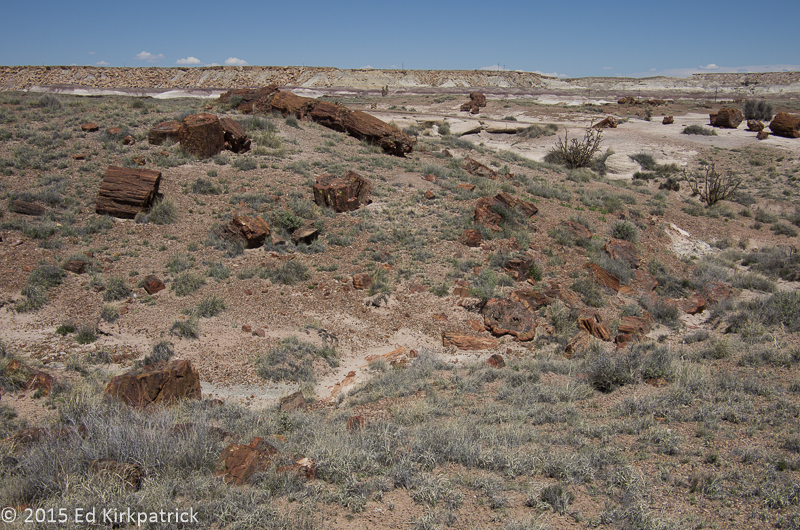 Over 200 million years ago trees lived in what was then a floodplain crossed by many streams. Also home to crocodile-like reptiles, giant amphibians and small dinosaurs these trees lived, fell and were washed across these floodplains. Over time a mix of silt, mud and volcanic ash buried the logs cutting off oxygen and slowing their decay. Silica-laden groundwater seeped into the cells of the wood replacing the original tissues with the silica and other minerals turning them to rock – petrification.

Time passed, the continents moved, this region was uplifted and the climate changed. More time, wind and water wore away the rock layers and exposed the fossilized animals and these ancient petrified logs.

Scattered across the desert for miles and still being exposed as the covering rock and sands are eroded away this beautiful landscape can’t help but make one be amazed at the remarkably slow march of time. Even with it so clearly laid out before you it’s almost more than can be grasped. Absolutely a MVL candidate! 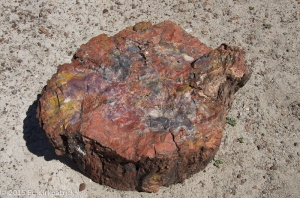 We had a wonderful two and a half months in Arizona and we still have not seen the northern part.  America’s forty-eighth state is amazing in its landscape and geology, has wonderful state parks and in winter is full of nice friendly Canadians. For those of us who like plants and rocks every turn in the road can produce a drastic change in flora, rock and minerals. Elevation and its effects on them is clearly evident and wonderful to see. We are now in San Diego visiting friends and eating fish tacos while figuring out where to go next.

Petrified logs emerging on the plain of the Painted Desert 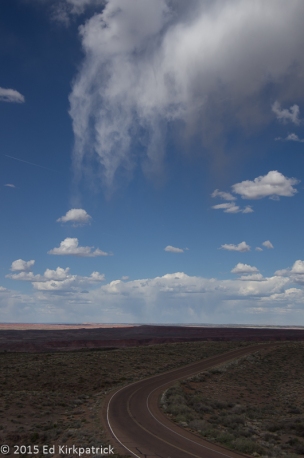 Virga over the Painted Desert

Badlands of the Petrified Forest

Blue Mesa between the Petrified Forest and Painted Desert

Logs emerging from the rock in the Petrified Forest