On our way to Flagstaff via another beautiful curvy mountain climbing road we stopped at Walnut Canyon National Monument. The limestone cliffs here are lined with naturally eroded overhangs creating shallow caves and alcoves where starting about 1124 people (now known as the Sinagua) began building their homes.

Mostly building in the recesses facing south and east, although there are some north and west facing, there are over 300 rooms around the canyon walls. Using limestone rocks, they shaped them roughly and cemented them together with clay found in the canyon, which they then also used to plaster both the inside and outside of the walls. The site was only occupied for about 100 years and lay basically undisturbed until the 1880’s when the railroad brought souvenir hunters to these ancient dwellings. In 1915 Walnut Canyon was declared a national monument. Everywhere you look there are the remains of these rooms. There is also an excellent, although often narrow, circular trail down around a peninsula in the canyon where one can get a nice view and actually step inside some of these ruins.

Walking around this narrow and now paved path looking across the canyon to all the many rooms we couldn’t help but chuckle at what OSHA (and modern day parents) would have to say about working and playing here. 🙂 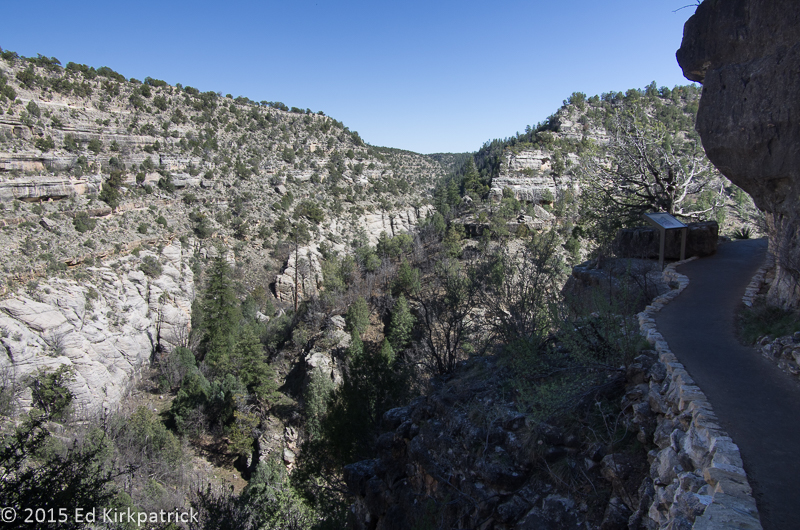 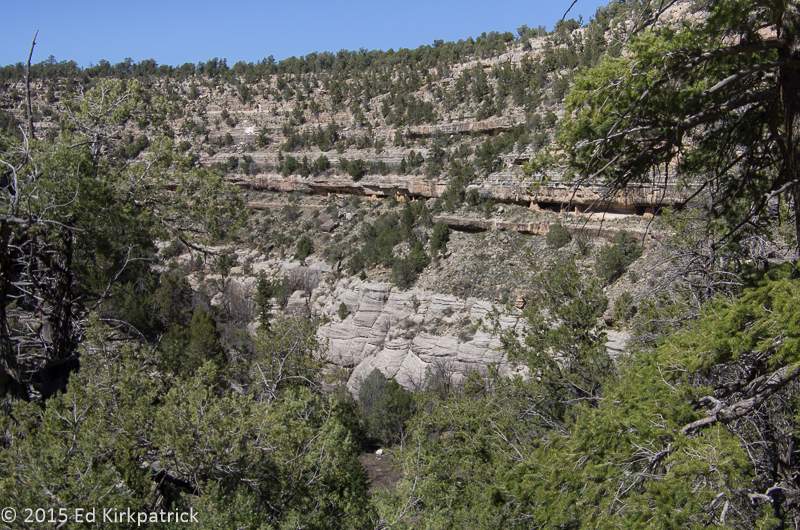 Looking closely, midway down, you can see the line of chambers that were homes.

And you can get a Black Cow at the Galaxy Diner on Route 66.

Flagstaff is a neat town and I really liked it….a lot. Ed of course couldn’t help but point out they can get over 100 inches of snow a year! Oh well, guess we’ll not put this on our “I could live here” list! Visiting is however highly recommended. The town backs up to the San Francisco Peaks which are beautiful and is also at a high enough elevation, 7000 feet, to have wonderful Ponderosa Pine forests, which are lovely although my sinuses disagree.

Just up the road from Flagstaff is Sunset Crater Volcano National Monument. Sunset Crater is the youngest volcano in a string of volcanoes related to the San Francisco Peaks. Most recently erupting about 900 years ago, Sunset Crater is a cinder cone and the cinder and ash field it produced covers 810 square miles! Lava does not explode up and out from this type of volcano, but it can and did squeeze out from the base.

This lava flow called the Bonito Flow is perhaps 100 feet thick and where it burst out on one side of the crater it filled a narrow valley for 6 miles! The end result for us, is a rugged and sharp landscape that is not only incredibly impressive, it’s beautiful too.

Lava squeezes up and hardens

San Francisco Peaks, at 12,637 ft are the remains of a large stratovolcano similar to Mt. St. Helens, estimated to have been over 16,000 feet.

5 thoughts on “Flagstaff, Arizona – Canyons and Craters and Caboom!”