During the summer of 1962 my Dad loaded us up in the station wagon for a sightseeing trip across country.  Among the many places he took us was the desert southwest where he had worked in the 1930s and he and Mom started their married life.  The idea of a place called Death Valley fascinated me and I wanted to go see, but my father said no, there was nothing there worth seeing.   Sorry Dad but WOW you were SOOOO wrong!  In fact, now that Ed and I have been to Death Valley, it is solidly on my top 5 favorite places list!

Covering over 3.3 million acres Death Valley is a place of extremes.  Bordered on the west by the Panamint Range, the highest peak being Telescope at 11,049 ft. and on the east by the Amargosa Range made up of the Grapevine, Funeral and Black Mountains, nearly 550 square miles of the Death Valley basin is below sea level.  In fact at 282 ft below sea level, Badwater Basin is the lowest elevation in North America and the 8th lowest in the world.  It is this valley depth, steep mountain height and relatively narrow shape of the basin that influences the temperatures where HOT does not begin to describe it.

As we all know warm air rises and cool falls.  Here at these extreme low elevations as the soil and rock get very hot and as this hot air rises back from the heated surface it is trapped by the mountain walls and only cooled slightly more than the air temperature. Then this descending air is compressed and heated even more due to the low elevation air pressure. This super heated air cycles though the valley as the ground temperature climbs ever higher adding “fuel to the fire” so to speak. 🙂  The highest temperature in the world was recorded here on July 10, 1913 at a whopping 134°, (disputed by some weather historians, they do still claim Death Valley has the highest temperature ever reliably recorded) and that’s just air temperature.  The highest ground temperature is an incredible 201°!

NOTE:  Perhaps Dad was right to not bring his family here during the month of August 🙂

There are four major mountain ranges between the Pacific and Death Valley, each depleting the amount of rain-fall advancing eastward.  These rainshadows cumulatively rob pretty much all the moisture before it can fall here, consequently the average rain for an entire year is only 1.94 inches!  Last October however there were back to back storms followed then on the 18th by an incredible storm where 2.7 inches of rain fall in just five hours!  From the Los Angeles Times news article, Death Valley District Ranger Paul Forward, trapped near Grapevine Canyon and Scotty’s Castle, “It started with heavy hail,” he recalled. “Three hours later, the dry wash was transformed into floodwaters 100 feet wide with 20 foot waves. The air was filled with the sounds of massive boulders grinding against each other as they rolled down the canyon.”

This 1,000 year flood destroyed roads and caused extensive damage that will take perhaps two years to repair.   Consequently, there are a number of places now closed to visitors.  There are also a number of places where we would have liked to have gone, but they are only accessible by high clearance and/or 4 wheel drive vehicles.  Even so, over five days we had a fabulous time exploring.

All the rain that falls on the surrounding mountains and the valley carries with it dissolved minerals and salts which can not flow out because Death Valley is an enclosed basin.  Badwater, being the lowest place in the valley, is where all this mineral rich water flows to and evaporates leaving behind this layer of salt.

The pool comes and goes.  Look carefully at the red arrow to see the big sign on the mountain side that marks sea level. 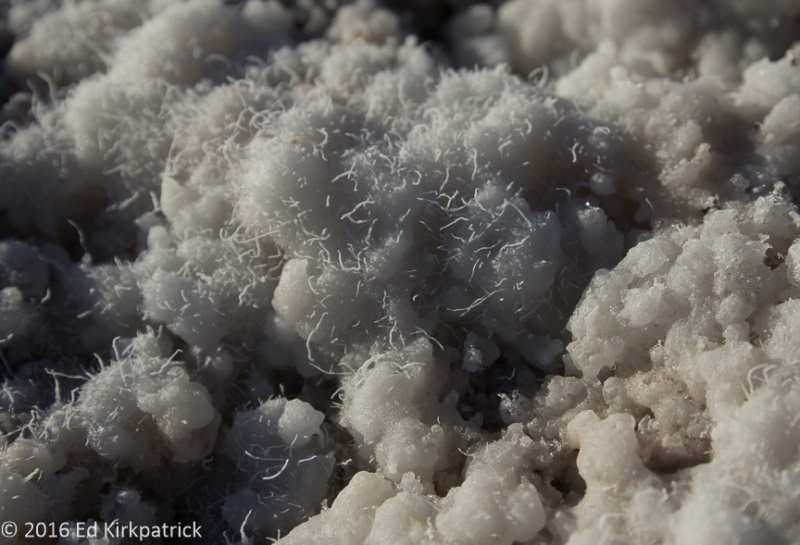 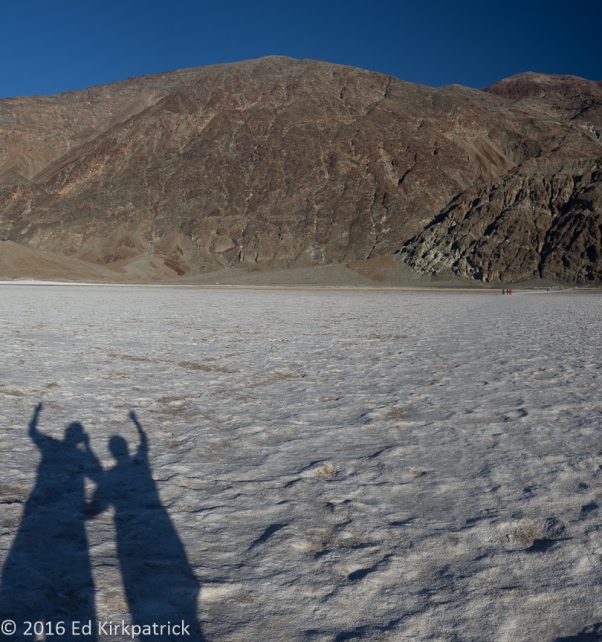 Devil’s Golf Course is several feet higher than Badwater Basin and consequently it stays dry which allows the weathering processes of wind and rain to sculpt the salts, minerals and mud into a crazy landscape of rough, complicated and beautiful formations.

Devils Golf Course.  These formations vary from about six inches to knee high.

Badwater Basin and Mormon Point are to the south of Devils Golf Course.

The salt spire’s edges are very sharp. Do not fall down in this place.

Considered one of the most breathtaking views in the park, Dante’s View overlooks Badwater Basin 5757 feet below. 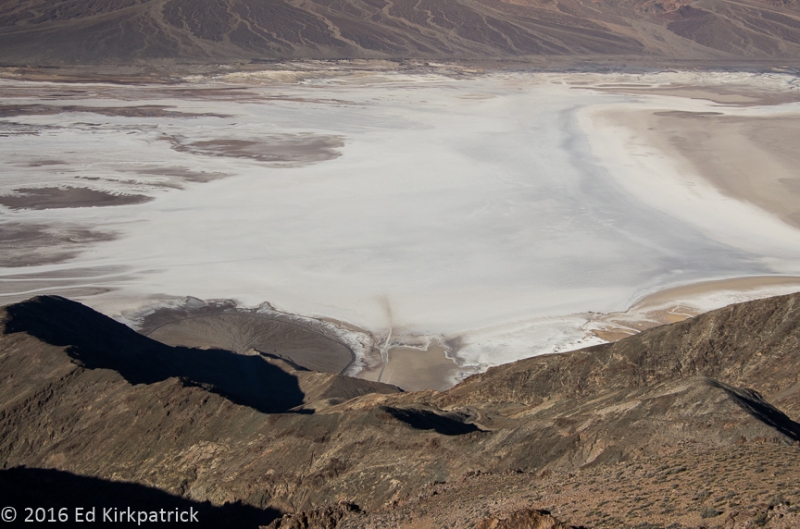 Looking down on Badwater Basin and eight miles across the valley floor to the alluvial fans of the Panamint Range.

and looking South. Note the salt pools which are green and can be quite deep.

Looking back to Dante’s View (see the RV?) and beyond, the high point is Dante’s Peak.

Contemplating the fall…  Hiking up to Dante’s Peak.

Artist’s Drive  is a nine mile loop drive back against the face of the Black Mountains noted for its astonishing variety of rock colors.  White, pink, green, yellow, mauve, purple, orange and browns, these colors are caused by the oxidation of the different metals in the rock.

Heading up the alluvial fan of Artist’s Drive. 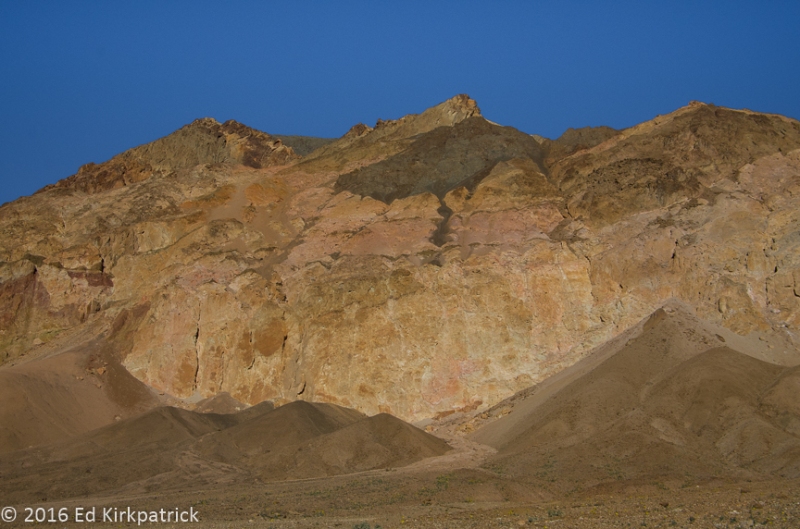 During very occasional rains over thousands of years, the water floods so forcefully down the mountains shooting over the cliff face carrying the stones and sediment away from the wall creating the piles of sand and rock.

The “Artist’s Palette” on Artist’s Drive.

Looking back at the end of the drive.