Continuing south on the extremely barren Extraterrestrial Highway (375) from little Rachel, NV we picked up US RT. 93 to State Rt.168 and onto I-15 E.  Approaching the northwest corner of Arizona the landscape improves particularly as the road starts to run along the Virgin River which is just beautiful.  Pretty quickly we were into Utah where we headed for RT 9 on our way to Zion National Park.

Named a national park in 1919, Zion expected 4 million visitors last year!  Thank goodness it was mid October which is towards the end of the season. With only 3 roads in the entire park, each covering a different area, the incredibly popular Zion Canyon section is nearly overwhelmed with visitors. During most of the year generally, March/April until October/November a free shuttle service provides the only access to this section, unless you’re an extreme hiker!  We camped under the Guardian at the Zion Canyon Campground & RV Park in Springdale which is just inside the park and at a shuttle stop.

Riding the shuttle all the way to the last stop, Temple of Sinawaza, we did the River Walk which runs along the Virgin River.  Just a 2 mile roundtrip this is an easy paved walk and allowed us the time to do a second longer hike afterwards. 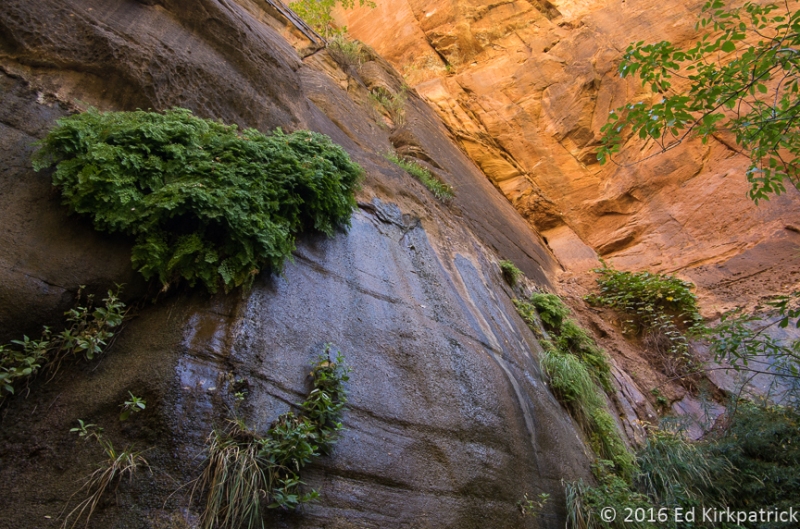 Catching a return shuttle we hopped off at The Grotto Stop where we climbed the 2 mile Kayenta Trail to connect to the Emerald Pools Trail at the Middle Pool.

Looking back down the canyon at the Virgin River from Kayenta Trail.

From there we did the steeper climb up to the Upper Pool which was rather sad as a pool goes but the cliff face….WOW! 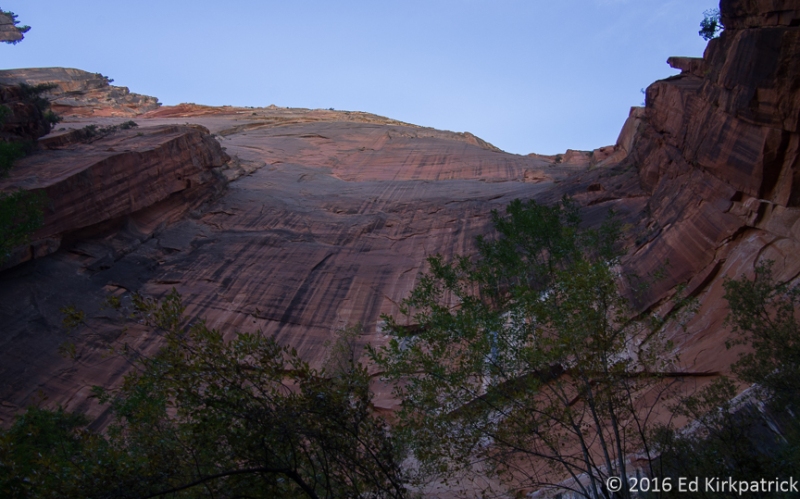 Standing at Upper Pool looking up the wall.

then on down the Emerald Trail to the Lower Pool and across the Virgin River to catch the shuttle at the Zion Lodge Stop.

End of the hike.  Marti did NOT tell me she was going to drag me 5 more miles after I did 2 on the River Walk trail…  I was cooked.

All in all, this hike was probably 5 miles and well worth it especially because I saw my very first California Condor flying high over head!  Very massive and very exciting!! but he disappeared back over the cliff top before Ed could get a picture.

The Narrows was our plan for the next day’s hike.  One of the most popular hikes in the park it goes up into the beginning of Zion Canyon.  Accessed at the end of the River Walk this end of the Narrows is called Bottom Up because it starts at the bottom of the beginning of the canyon and you’re mostly walking upstream IN the Virgin River.  Even though we got a late start and the water temperature was 49* we put on our sneakers, grabbed a walking stick and caught the shuttle back to the River Walk, which we did at a pretty good clip, and then headed off for the real hike, into the river and canyon. 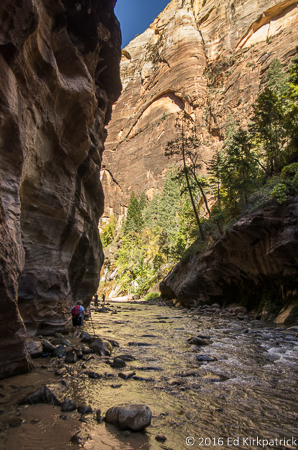 The Bottom-Up into the Narrows.

Surprisingly we got use to the cold pretty quickly.  Of course after a while we were also numb.  🙂  While we had a lot of fun, I would like to do it sometime when it’s warmer and we have an earlier start.  That evening after changing into warm, dry clothes we had a wonderful meal at The Whiptail Grill.  Listed as Mexican it is not what you might expect and we highly recommend it!

Heading out of Zion on 9 East the next morning.

To leave Zion we planned to continue out Rt. 9 the Zion-Mount Carmel Highway which requires going through a 1.1 mile long tunnel which has size restrictions.  At 11’4” high and 7.5’ wide you have to buy a $15 pass which allows you to drive down the center of the tunnel. The Park Ranger at the entrance calls the Park Ranger at the other entrance who stops and holds that traffic and when the tunnel is empty, you get to proceed.  Very civilized 🙂

… I may have illegally stopped in the tunnel so Marti could snap a picture out the window. The tunnel window…

Zion is truly magnificent; Ed says he likes it better than the Grand Canyon because for him in particular it’s more accessible.  We managed a decent look around but there is much more to do, so join us and put it on your MVL (Must Visit List). 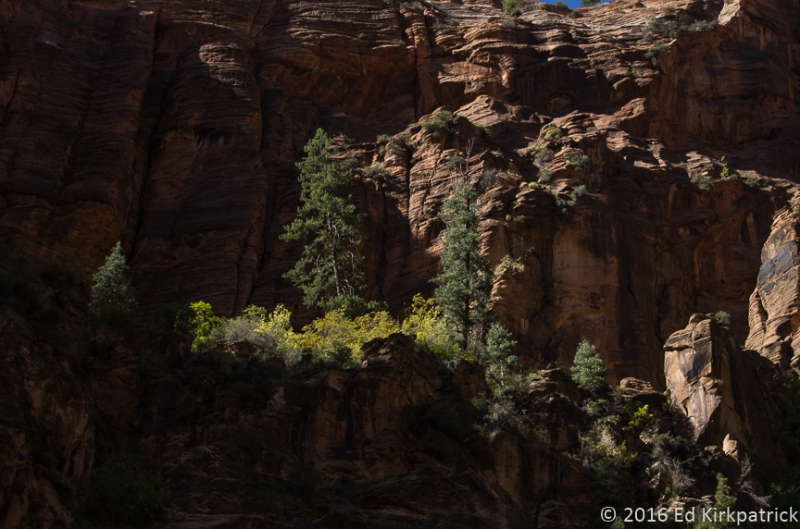 A bit further on the River Walk,  Ed thinks, but we don’t really remember clearly.  Alcohol was not involved, it came later.

Approaching Upper Pool which is located under the white streaks in the lower right corner.

Looking straight down the canyon from the same spot as above.  The wall is on the right hand, Upper Pool is behind me. 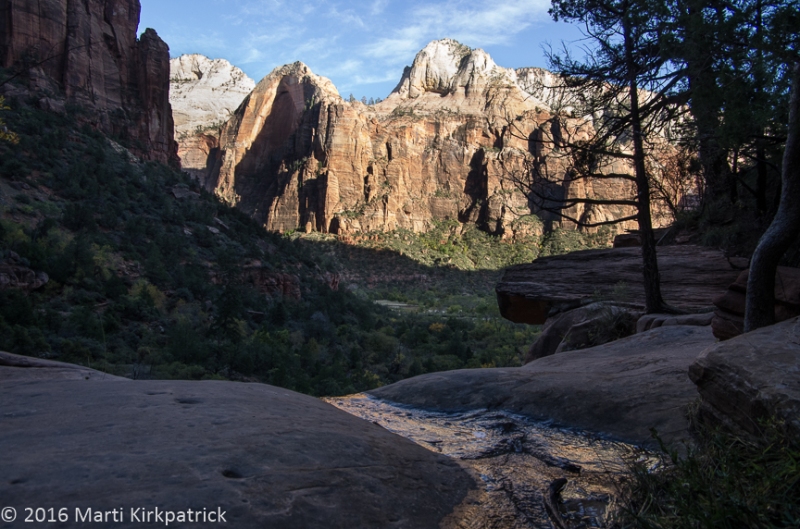 Continuing on down to the lower pool trail, Marti may or may not have crossed the chain to get close enough to the edge to take this photo lying on her tummy.

Ed picking his way across the knee deep, fast flowing and cold Virgin River in the Narrows.

Marti in a shallow spot headed for the sunny spot.

Our view from where we sat to have our lunch, granola bars and  oranges. 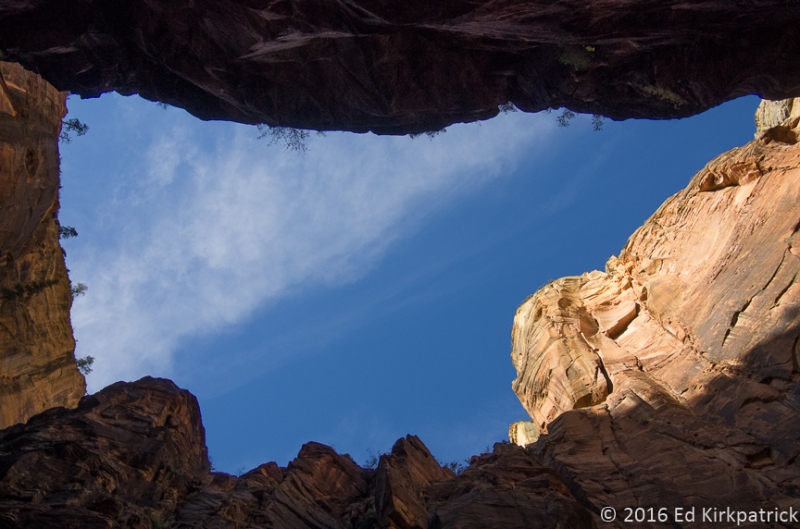 A place where the Virgin River turns and the canyon narrows seem to box you in.

Some peoples to give a sense of scale. 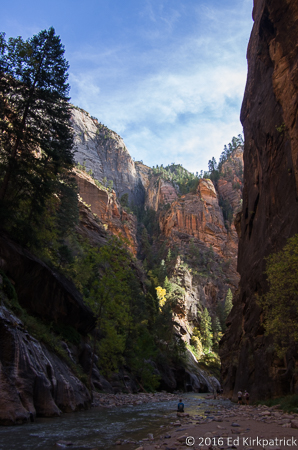 One of the prettiest and more open spots on the wade up the river.

Water cascading down the rock face of the canyon.

Marti has never used a walking stick until this day and she is very thankful she did.  This is the entire width of the canyon, wall to wall and the cliffs are hundreds of feet tall. We did not make it to Wall Street which is the famous really narrow and tall cliff section where the cliffs are 1500 feet high.  It was too late in the day, too cold and we still had to walk back out. Next time.

In the very, very dark tunnel approaching one of the several windows.

An incomplete Nature made window

On the other side of the tunnel on RT 9 East, the park is very different with wonderful hikes but we couldn’t park our rig.  We will have to come back when we can rent a car.