When one leaves an island to go back to an island I guess “returning to the mainland” isn’t exactly accurate. In any case, we off loaded from our Fogo ferry ride and headed off for 330 East and the village of Newtown where the Barbour Living Heritage Village is located.  We did the tour but in all honesty having been in Newfoundland some time now, we didn’t really learn anything new.  There is however a lovely church here.  Ed went to take a photo of it but the shot he wanted required walking into someone’s yard.  They happened to be outdoors and so he asked permission.  The delightful, elderly lady not only said of course, she then walked him back up the street to show him the house where she was born and raised.  Turns out it’s the oldest house in Newtown. 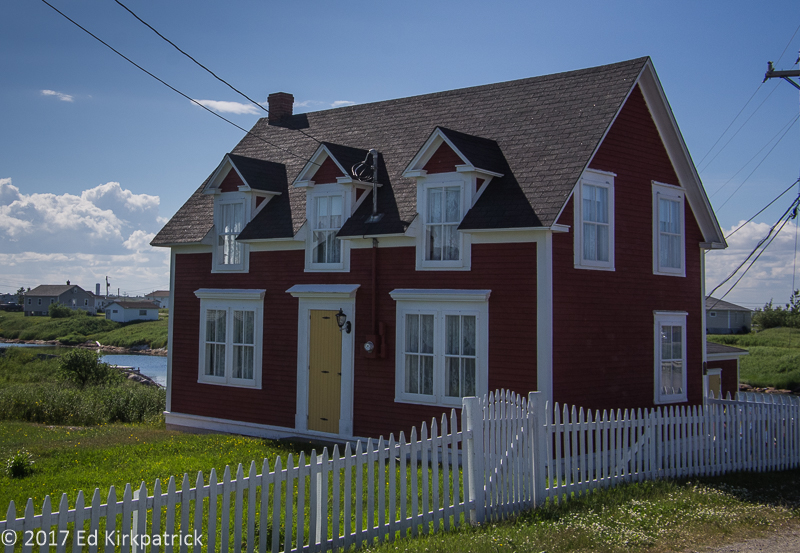 Not only the oldest, but maybe the cutest.

Next morning continuing south on 320 we took a side trip out to Greenspond, a small village settled in 1690.  We stopped to walk around and got to chatting with 3 men building an outhouse (although they said it would have a flush toilet) next to a walking trail, because “when you have to go it would be good to have a spot to do it in” 🙂  One of the men told us that many of the houses in town are now summer homes, including his, and because they are on a steep hill, on the wrong side of the prevailing winds, winter can be especially hard.  In fact he said the mayor last year had to phone for help because his home was finally covered half way up the second story. He said a “crowd of men” had to come dig him out!

Greenspond is an island community made up of several other islands. The part of town where we chatted with the men is off to the left out of the picture.

We camped the next two nights at Newman Sound in Terra Nova National Park where I made great use of the laundry.  Fellow RV’ers this is a big campground and the sites have pretty good vegetation screening, but it is very busy and there are lots of small children on bikes so watch out!

The Bonavista Peninsula is one of Newfoundland’s most visited locales and we were especially looking forward to our visit here.  While our weather was not the best we did take the side road 235-20 out to Keels on our way to Paradise Farm RV Park near the town of Bonavista. We based out of there for a couple of days and recommend their boondocking sites particularly.

Lobster pots and a squall headed our way in Keels.

The lighthouse on Cape Bonavista is the 4th oldest in Newfoundland and houses a rare catoptric light.

The light is on a stone column around which was built the keeper’s house so each room has as one of its interior walls the round stone tower.

An array of six parabolic (bowl shape) reflectors, in this case highly polished silver, reflected the light from lamp wicks burning seal oil.  This whole apparatus was turned by a weight driven mechanism similar to the weights of a pendulum clock, only this one required the light keeper to rewind the weights EVERY TWO HOURS!! If you are a lighthouse lover you must put this one on your MVL (Must Visit List).

This is the catoptric array. Not only did the windows have to be washed constantly, but the polished silver bowl had to be constantly cleaned.  You can see the modern light through the window. 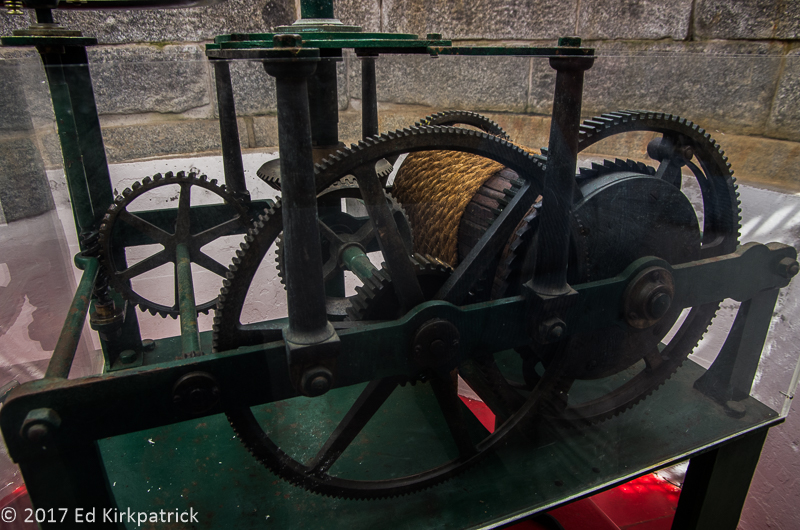 This is the winding mechanism which turns as the weights pull down thus turning the gears and spinning the light, just like a clock.

There are paths around the light where we found many, many bird wings that were the remains of meals a Silver Fox and her kits enjoy when not getting hand-outs from tourists.

A very relaxed and unconcerned Silver Fox soaks up the sun as people walk by just below the lighthouse.

Near Bonavista we also drove in to Dungeon Provincial Park where there was actually a sign labeling the area as pasture and there were horses and cows!

The dungeon is a collapsed sea cave with twin entrances. Pretty cool.

As I said in our first Newfoundland blog post, icebergs were at the top of our list of things to see, second was PUFFINS 🙂  Elliston is famous for their root cellars (which are actually all over Newfoundland but there is a high concentration of them here), and, the Atlantic Puffin which come to nest each summer. 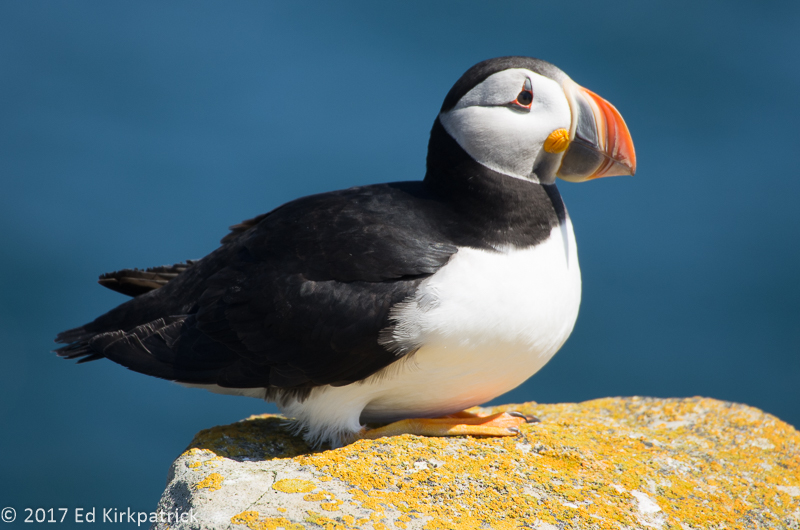 Very cute but I think it’s a sad face… 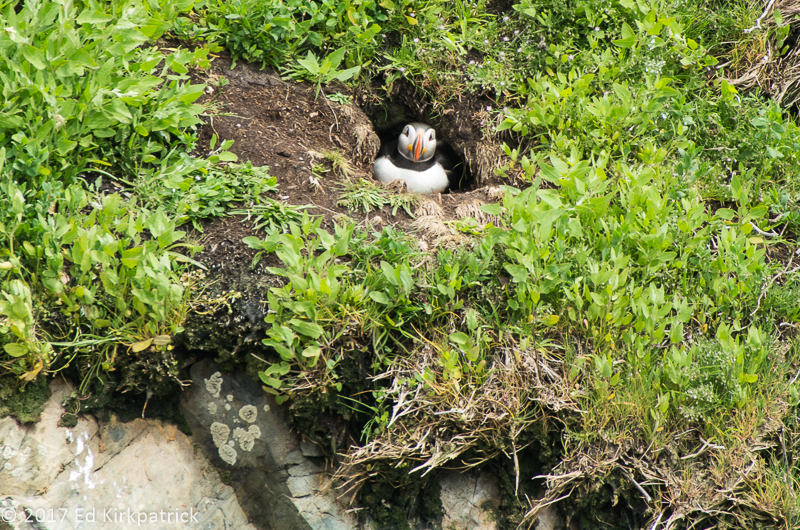 The males generally dig the burrows where one egg is laid.  They share in tending the nest.

Also on the Bonavista Peninsula is the village of Trinity where fisherman set up summer stations as early as the mid 1500’s.  This charming village is situated on the hills above a protected harbour. A delightfully walkable town we spent several hours poking about before a nice lunch at Dock Marina Gift Store & Art Gallery.  Trinity was also the shooting location for the 2002 TV mini-series, “Random Passage”. 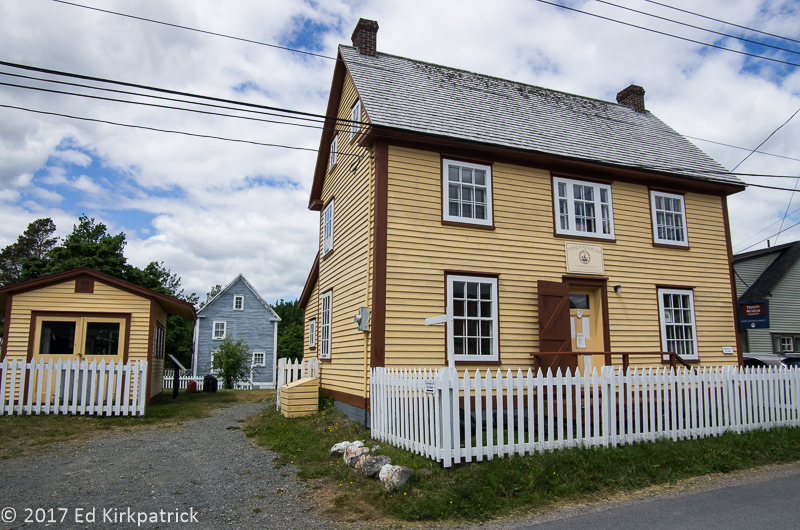 The Trinity Museum is chockablock full of interesting stuff about fishing, sealing, life over the last 200 years and the first experimental use of the smallpox vaccine in North America.  Rev. Dr. John Clinch gave the first vaccines here in Trinity to his nephew and children in 1798 to prove their efficacy.

A vigorous Rosa Rugosa bush.  They were in bloom everywhere on Newfoundland and the magnificent fragrance just filled the air.

Across the bay from Trinity is Fort Point which entails a drive out a rather horrible narrow dirt road, but oh what a trip worth taking!

The lighthouse at Fort Point is not open for tours but you can walk around the grounds and learn all about the fortifications built by the French and British to defend the harbour.

After walking around the grounds of the light we parked here for the night and watched whales all afternoon and evening until dark.

We never tire of watching the humpbacks.

We cannot believe how very much we are seeing and how beautiful it all is. This is now post five and we expect to probably have two more about “The Rock”.  Ed & I thank you for being  armchair travelers on our Newfoundland adventure and hope you will keep “riding along” with us. 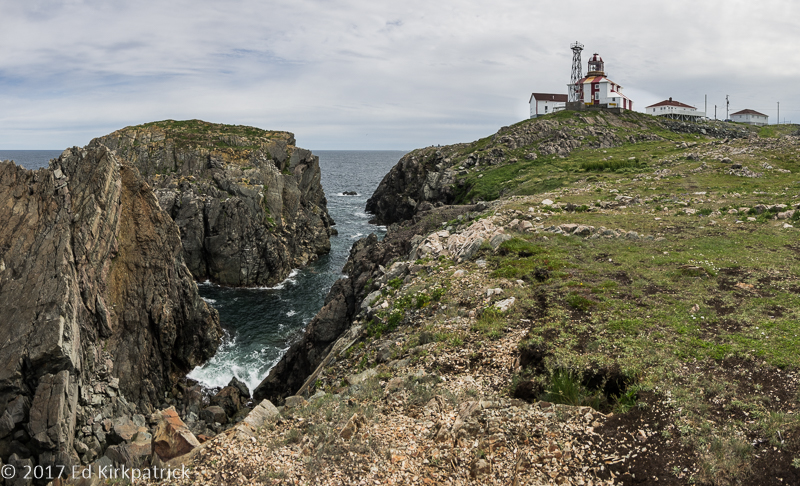 The kitchen in the Bonavista Lighthouse. Notice the weight in a cubby next to the small table behind the stove.  This opening runs up in the stone column to the winding mechanism that turns the light.  Every two hours it needs winding.  Nobody got much sleep. 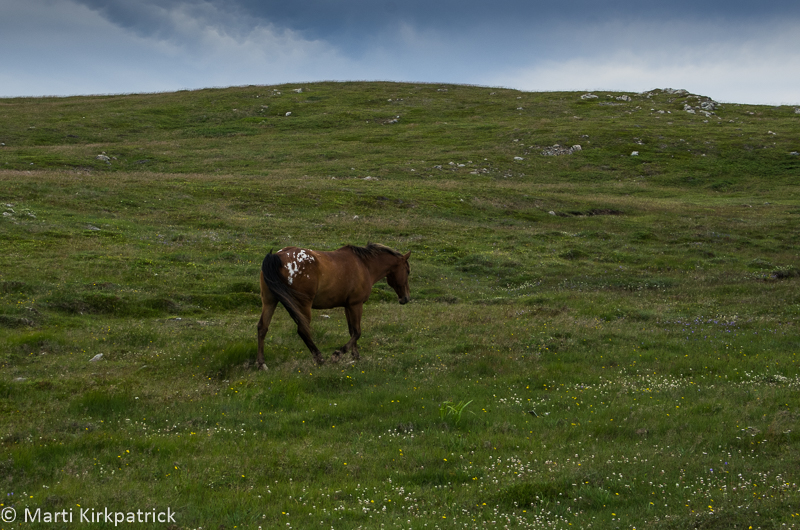 A rare sight on Newfoundland, pasture and a horse.

Our last iceberg on this trip in Port Rexton.  Ed managed to grab some more iceberg bits for his cocktail glass.

Also in Elliston is a nesting colony of Black Headed Terns. Constant non-stop activity as the mates brought little fish to the nest to feed the family.

Puffins are seabirds and spend most of their time on the water except when they come to land to build nests and raise their young.  This site near Elliston is considered the very best and almost only place one can see puffins this close up.

One of hundreds of root cellars where root veggies and cabbages are stored over the winter months.

The sanctuary of St. Paul’s Trinity. 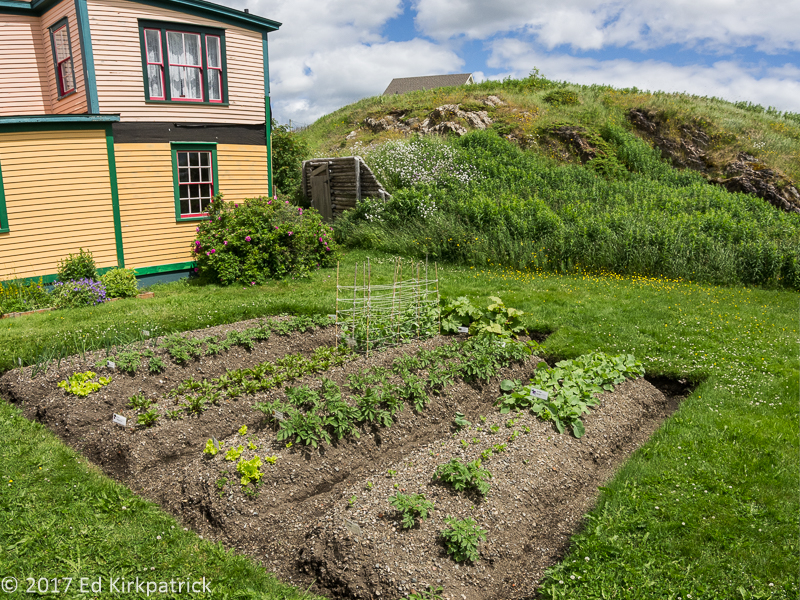 We love the wide range of the painted colors of the houses of Newfoundland. When’s the last time you saw a pink, yellow and green house? Note the root cellar behind the garden.

Can you imagine the response of an American homeowners association to the delightful palette of these houses? 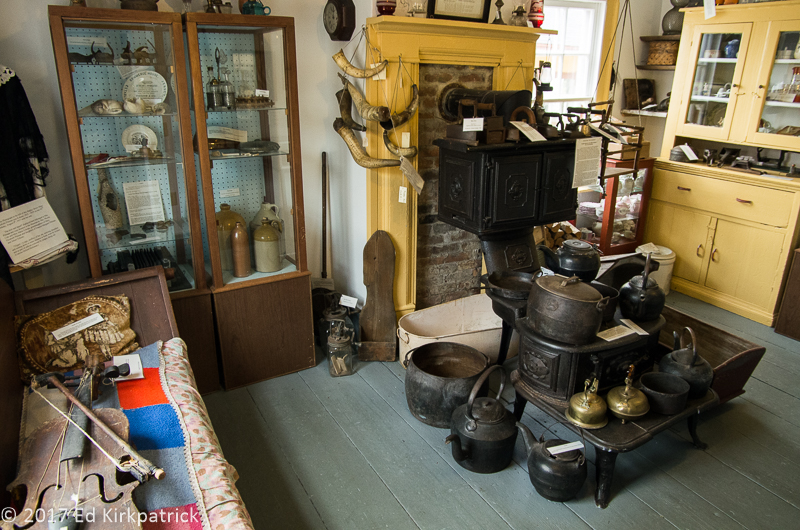 Inside the Trinity Museum…  Most items have a tag explaining what it is and who donated it. 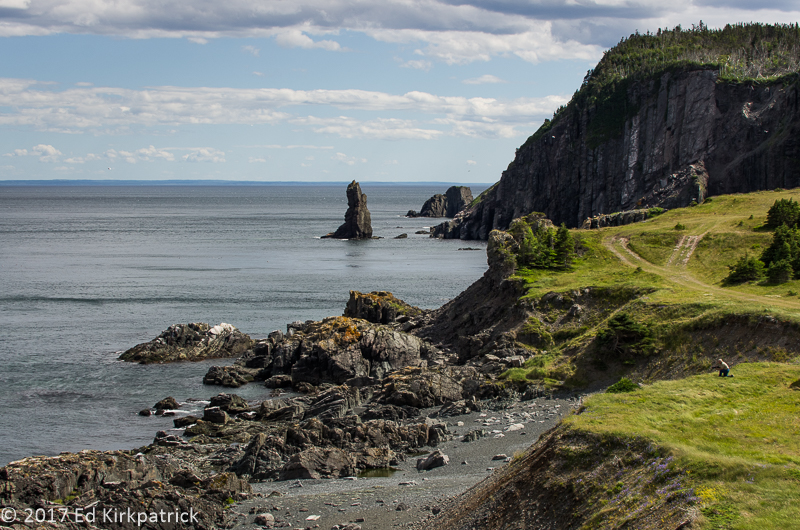 The sea stack is known as Naked Man.  This scene is just to the right of where we overnighted on Fort Point.

Night falls on Fort Point and the light shines.