Hello faithful readers!  We apologize for the long delay in posting and readily admit to actually being back in Maryland for some time now.  Life, as we’re sure you know, can just sort of get in the way and all of a sudden time has flown by.  We have been talking about our wonderful summer in Newfoundland so constantly that it’s a wonder our friends and family here at home haven’t abandoned us!  Having both agreed it would be unfair to not share with you the rest of our adventure in the hopes that you too will visit this amazing island, we shall pick up where we left off 🙂

As we continued our exploration of Newfoundland, now in our sixth week, we headed south on the TCH (Trans Canada Highway) for the Avalon Peninsula where we went around counter-clockwise south on 100 on the first “finger” known as the Cape Shore. 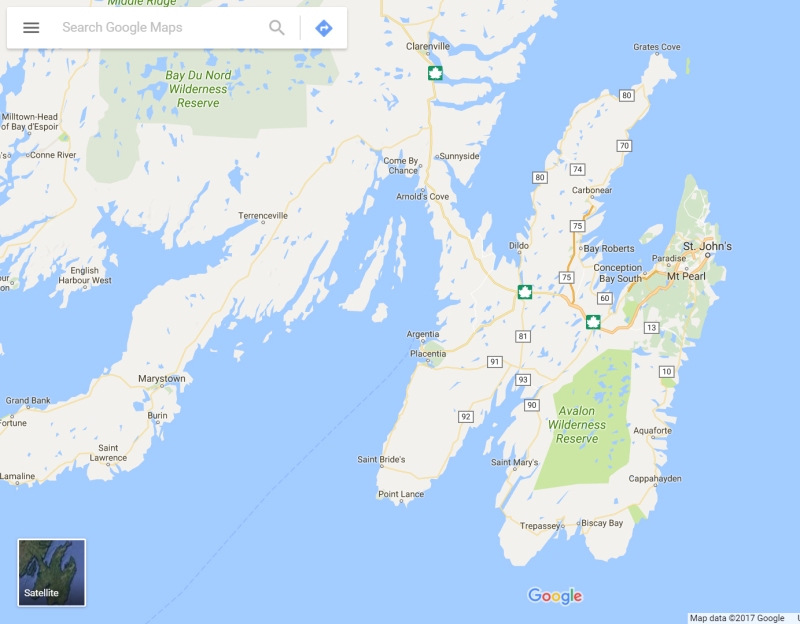 As usual, the road was full of potholes and DIPS, and I capitalize that to emphasize the seriousness of these struts, shocks, and axle wrecking road hazards.  Ed’s favorite bumper sticker was, “I’m not driving drunk. I’m avoiding potholes!”  Happily, however, when not closely watching this obstacle course of a road, Ed managed to also see the big hilled, lovely countryside stretching out around us.  At St. Bride’s the road turns east and becomes even more horrific.  Pretty soon, however, we get to the very narrow but smooth road out to Cape St. Mary’s Ecological Reserve and our destination for the day. The site of some of Newfoundland’s largest seabird colonies, we were very lucky to have a pretty day as we headed out the easy 1 km grassy path to the best viewing point.

On the way out to the viewing point, the presence of over 60,000 birds becomes apparent.

Approximately 24,000 northern gannets, 20,000 black-legged kittiwakes, and 20,000 common murres, among other birds, come here each year to nest on the cliff edges and the 100 meter tall sea stack known as Bird Rock.  Before we even leave the interpretive center we catch whiffs of bird poo on the air and it’s not too far down the walk before we start to hear them, but it’s not until we get much closer that the smell and noise become really impressive, but WOW what a sight!

Nesting Northern Gannetts occupy the sea stack, Black-legged Kittiwakes, and Common Murres nest in the remaining cliffside niches behind Marti and behind where I am standing.

Northern Gannetts all perform this greeting dance whenever one partner returns to the nest.

Common Murres, one here holds a capelin in his/her beak.

A Black-legged Kittiwake contemplates its next move…

Having spent a couple of hours just sitting and watching the birds (and humpback whales) we slowly walked back towards the interpretation center enjoying the views and chatting with a couple of folks along the way.  Back at the parking lot, we settled in to boondock for the night. Over our cocktails, we watched the advancing pea-soup thick fog obscure the Lighthouse when the foghorn began sounding – all night, every 30 seconds.  The fog eventually became so thick the foghorn was hard to hear but it was a peaceful comforting sound all the same. 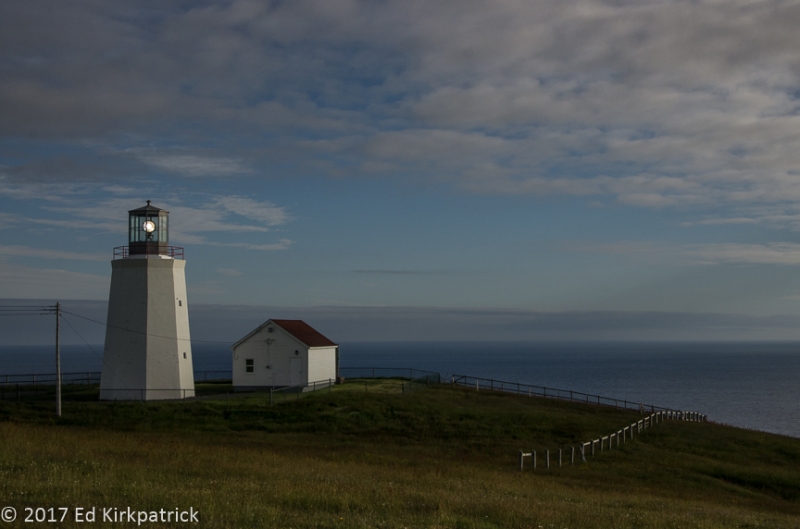 Just at sunset, the distant fogbank approaches for the night and next day. 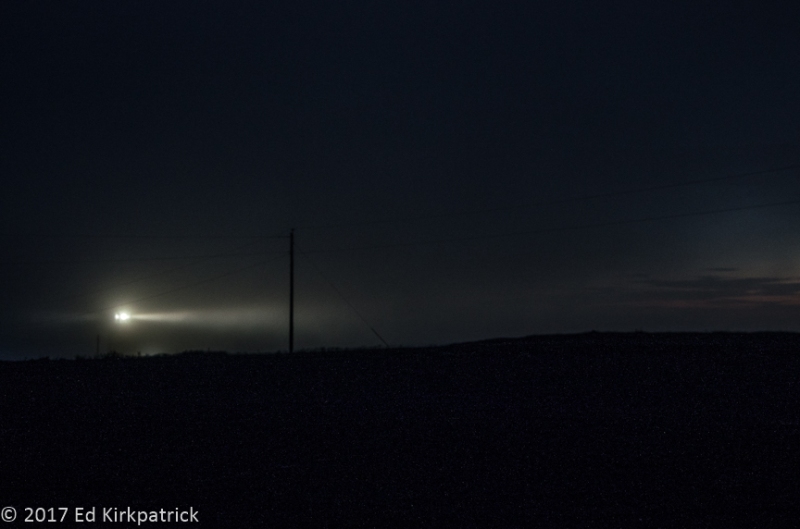 Before we departed Cape St. Mary’s we took one last hike out in the fog to view the birds again.

Next morning still in the fog we left Cape St. Mary’s, to continue on our journey. At the village of Branch, the road (now 92) turns north and the Sun came out…well at least for a while. 🙂  As is true in most of Newfoundland the road either hugs or is within a few miles of the coast and the view out the inland window is of wide open barrens punctuated with incredibly dense thickets of mostly fir, spruce, and ash.

This is the barren peat bog part dense with fern, berry plants and low scrubby growth.

At the top of this first loop we cross over to the Irish Loop heading south toward the town of St. Vincent’s where we’ve been told the whale watching is world famous.  A steep dropoff at the shoreline here creates a deep water area where the feeding humpbacks can be seen within 300 feet of the long stone beach. 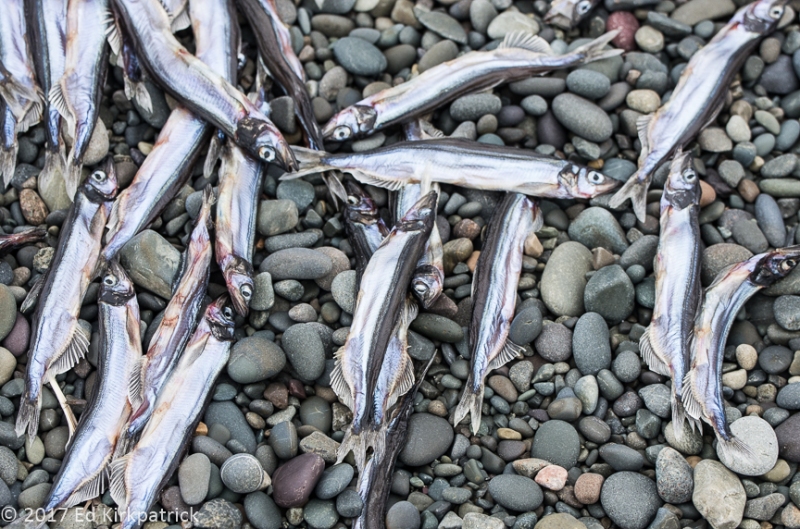 The beach was littered with capelin which had washed up.  These small fish are what the whales, seals, and cod feed on.  They stay out to sea all year except when they breed in the warmer waters near shore. The whales follow them in which is when we get to see them feasting on the schools.

We continued on to Trepassey where for some reason I expected a larger town.  Sort of looking for a place to stop for the night we headed out a road with a sign that pointed to an “interpretive site” thinking that might be a spot where we could stay.  The road quickly turned to gravel, but we kept going and on a big curve I spotted a lighthouse ahead and figured ah ha, we can stay there.  Eventually, we rattled and banged our way to the end of the road where we did indeed find the Powles Head Lighthouse and outside the fence a small, mostly level, gravel parking space. The old lightkeepers home was just up the hill and someone clearly lived there, so we walked up to the screened door and knocked and knocked and called “Hello”.  After a bit, an older gentleman came to the door.  We pointed to our RV and asked if it was alright if we stayed the night.  He allowed as he didn’t know what the authorities would say but he certainly didn’t care. The weather had definitely deteriorated back to heavy fog and drizzle so we did not walk around, but we did have a peaceful night with just the sound of a foghorn once again lulling us asleep.

Next morning I had wanted our next stop to be the Mistaken Point Ecological Reserve which is world famous for the 575 million year old fossils preserved in the rock, and the Cape Race Lighthouse where the Marconi Wireless station received the Titanic’s fateful distress call April 14, 1912.  The dirt road to the end, however, is about 15 miles of what even locals call treacherous and the weather was still fog and rain so we put it on our “must come back list” 🙂

Ed & I are lifelong Marylanders and as such, we had to visit Ferryland and the Colony of Avalon site where George Calvert, 1st Baron Baltimore had his agent Captain Edward Wynne establish what became the first successful permanent colony in Newfoundland, with a population of 100 souls by 1625.  Calvert wanted the colony to be a refuge for Roman Catholics being persecuted in England. By 1629 Calvert, however, wanted a place more hospitable, i.e. warmer and so he set sail south, settling in what would become Maryland. 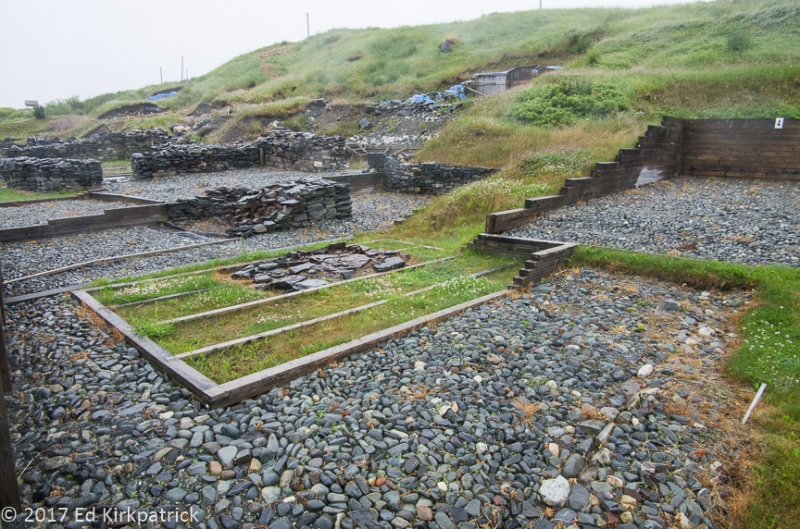 In its 25th consecutive season, archeologists have only uncovered a third of the original four-acre site.

We had the visitor center to ourselves and enjoyed reading about the colony and seeing the many items (be sure to open the drawers under the displays) already found in this still very active archeological dig. We also highly recommend stepping into the kitchen in the back of the gift shop and chatting with the delightful and knowledgeable docent in period dress, busily cooking something from a 17th century cookbook over the open fire!  They work at perfecting a different recipe each week, and there’s a social media contest for those who want to try their hand at it in their own homes.

The next morning dawned bright and sunny and we headed north up the coast to Cape Spear and St. John’s but that’s our next post.  Coming soon we promise!

Common Murres nesting on the cliffs. 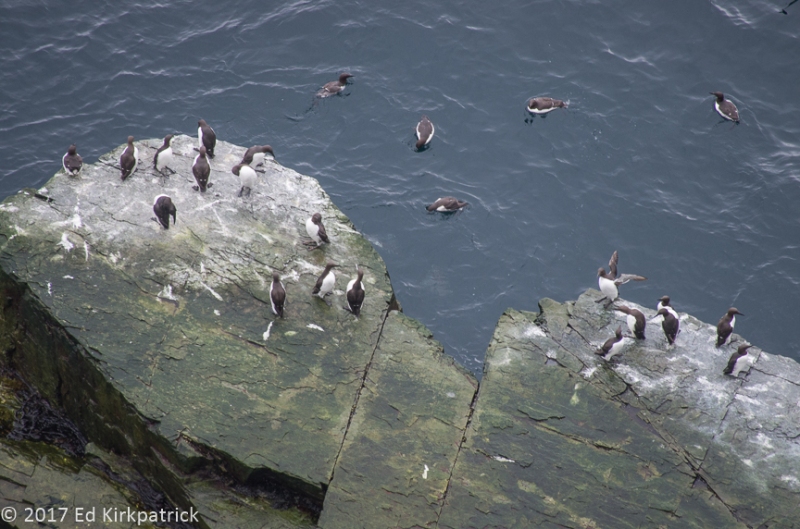 Common Murres both in and out of the water.  They spend most of their time at sea and can swim underwater for distances of 98 feet on a regular basis with diving depths of up to 590 feet being recorded.

That bit of fluff there is a baby gannet.  Often they just lay around and we thought they were dead but then… they wake up! 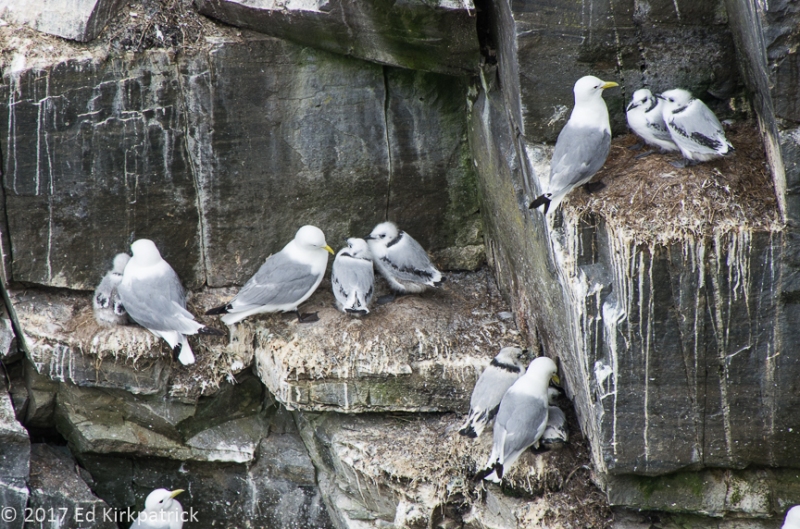 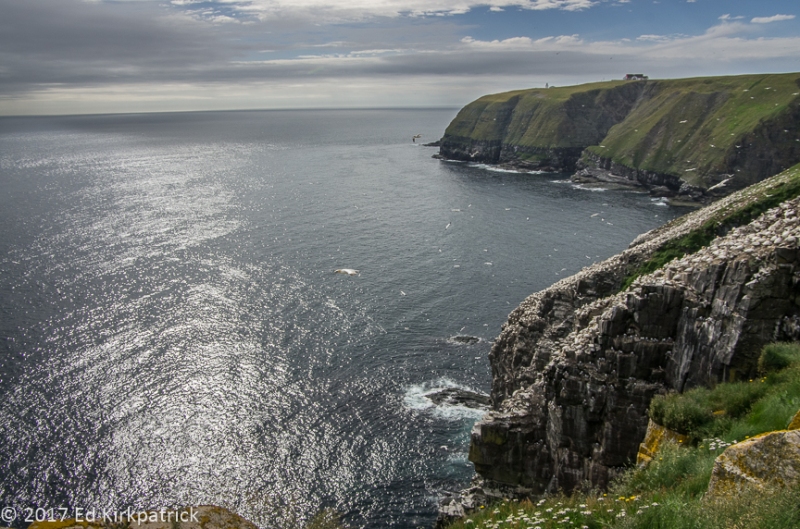 Looking back towards the lighthouse at Cape St. Mary’s.

Looking north from beyond the lighthouse the evening was beautiful just as the fog approached from the south.

It is a pretty walk. 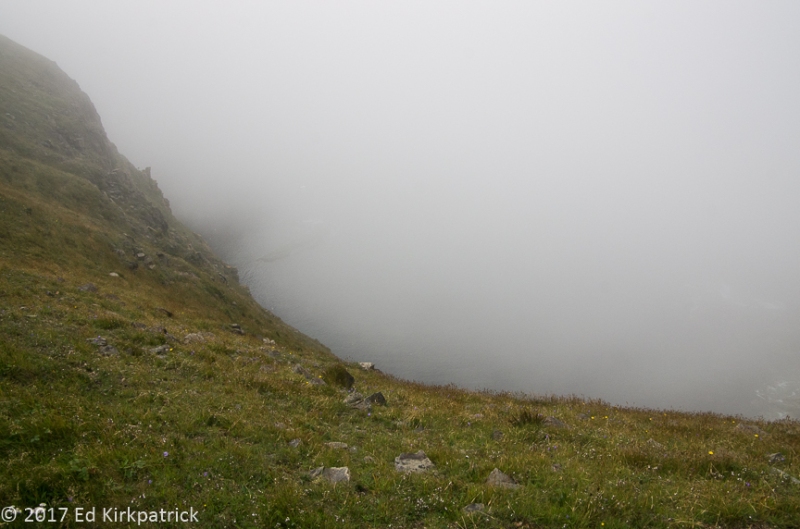 but it can get foggy at any moment then the world disappears. On average it’s foggy 200 days out of 365.

Now you seem him, now you don’t…

Not your average RV park…

Looking back over the Avalon Colony site towards Ferryland.