On Fogo Island, the Town of Fogo Island is comprised of several small villages which used to be separate and unique defined largely by either their religion or ethnicity.  The villages: Fogo, Joe Batt’s Arm, Barr’d Island, Shoal Bay, Tilting, Seldom and Little Seldom were all amalgamated in 2011 forming one community in order to more efficiently provide services and a stronger regional voice politically.

The ferry to Fogo Island (round trip $22.25 Canadian!) operates on a first come, first served basis. We headed out really early from Twillingate and the hour long drive to the village of Farewell to hopefully be in line for the 9AM ferry.  It turns out I failed remedial reading and departure was set at 8:30AM. However, we did get there with lots of time to spare and easily made it on board.

The MV Legionnaire is a brand new ship and was nice and shiny.

On the Fogo Island side, the ferry docks just outside the village of Stag Harbour where we off-loaded and headed for the only RV campground on the island.  Within 10 minutes we were both grinning ear to ear already in love with this rocky place!  Getting to the campground we found a lovely spot on a rise overlooking Banks Cove in a mostly empty park. Bordered on one side by Brimstone Head and a much smaller rocky hill on the other this place is only lacking WIFI, although it can be had up by the Lions Club rec-hall at the top of the park.

First thing we did after hooking up was to hike the very steep, but largely staired, 338 ft climb up to the platform perched at the top of Brimstone Head.

Brimstone Head on the left with Banks Cove and our campground on the right.  Notice the stairs leading up to the platform.  Stairs and boardwalks are built all over Newfoundland and especially on Fogo to provide access as well as protect the bogs and fragile plant life.

On the way up we stopped and had a long chat with Lorne Simms who pointed out her home near the trail just over on the other side from Banks Cove.  As we have already experienced, folks from Newfoundland are beyond friendly.  She told us to stop in for tea if we came by on a hike and offered her canoe if we wanted to paddle around the cove! In chatting with Newfoundlanders, Ed likes to say that in two minutes you are friends and in ten, family.

It was a very warm day, near 80*, hot by Newfie standards, and Ed decided he’d go for a swim just to prove he could.  After warming up he broke a chunk off the bit of iceberg just on the edge of the water and we had 15,000 year old ice for our cocktails 🙂 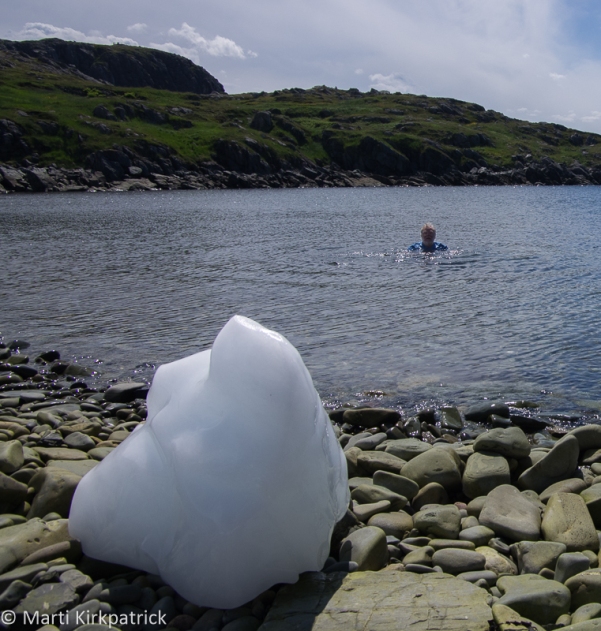 Marti insists that I did not swim but just dipped.  Call it what you will, it was cold. There was a Newfie fellow who did actually swim around for a good 15 minutes. This chunk of bergy bit provided us with a freezer full of ice for our cocktails.  The ice is so dense it does not absorb salt from the ocean.  Just rinse it off with fresh water and it’s good to go. 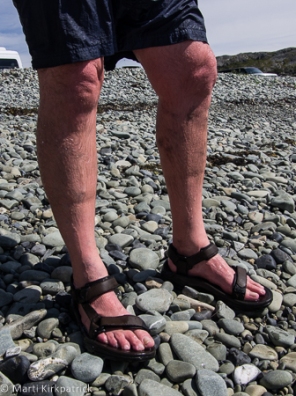 My legs are not normally purple.  It was COLD.

When we woke the next morning we could see a big iceberg just off the point of the next cove so we hiked out to take a closer look.  We sat for a long while just watching the icebergs. Giving different ones names so we would know which one was which, we talked about them as if they were dear friends.

We called this one the Matterhorn and it was with us for the entire week as it broke up and finally melted/floated away.

After about an hour we walked on around the point looking for the continuation of the trail we’d been told was there.  Not finding any kind of path Ed surprised the heck out of me and said let’s just go up and over!

It was remarkably steep and unlike most climbs we have done before, Ed found the footing very easy and secure and I did not.

When we first got to the campground I had a nice chat with the gentleman registering us. He informed me that there was a kitchen party here at the Lions Club Wednesday night and we should be sure to come as it was lots of fun with Newfie music, Newfie food (JamJams) and a 50/50. Oh, and of course we could also then be Screeched-In.  Ed in particular is always ready for a good time and so of course we headed up when the doors opened about 8:30. 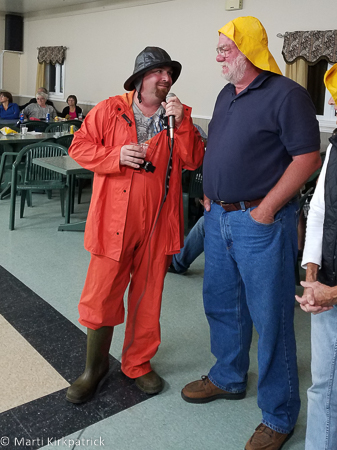 Part of the Screeching-In ritual is reciting Newfie sayings and phrases.  For the life of me, I had no idea what Denny had said to me and my efforts to repeat it caused gales of laughter from the locals.

The final step in the initiation to become an Honorary Newfoundlander (being Screeched-In) is to “Kiss the Cod”. He was frozen solid but still fishy.  You do what you have to do… We had a blast and have certificates to prove it.

Fogo Island is the largest of the Newfoundland Labrador offshore islands.  Originally a part of the French Coast, by the mid 1700’s the English and Irish were settling here and indeed the small town of Tilting on the northeast corner is to this day uniquely Irish and Roman Catholic.  In Tilting we visited the Dwyer Premises which offers a close look at the salt cod fishery process of old (for individual consumption the basics of the process has not changed). 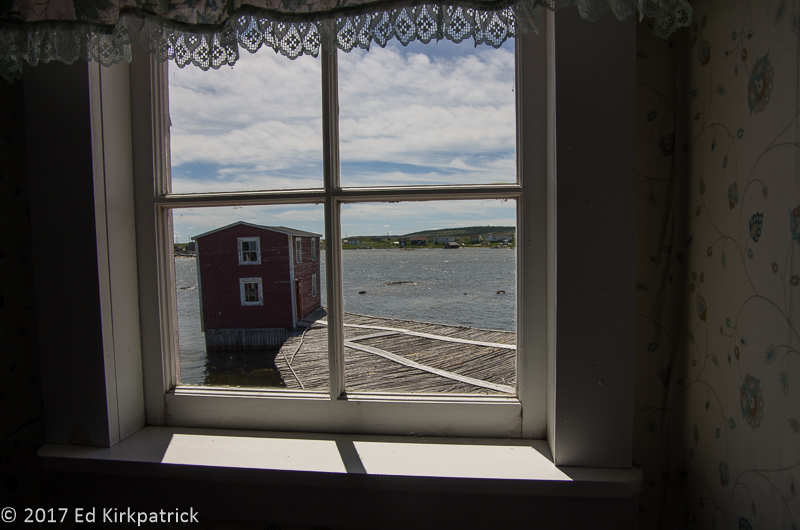 Looking out from the Dwyer Premises to see the fishing stage and decking poles which are called longers, that make up the stage platform. The building is where the cod was split and salted, then a few days later the salt was washed off and the fish flakes laid out to dry in the sun and wind. Every night the pieces of fish were stacked and covered and laid out again the next day. The fishing of cod, salt preservation and extracting of cod liver oil was the whole reason for being in every village on Newfoundland.

Because there was an unnamed walking trail sign by a short dirt road we drove out to the little pullout next to a narrow path along Oliver’s Cove that was to be one of our prettiest hikes on the island.

Oliver’s Cove.  Marti just maybe might have found a rock she liked…

Our favorite village was Joe Batt’s Arm, and in all honesty it wins over Tilting because of Nicole’s Café!  As you dear readers have probably noted, we travel by our stomachs 🙂  If you’re on Fogo, DO NOT miss Nicole’s!  Everything is wonderful but the mussels are… WOW!

Fishing stages in Joe Batt’s Arm with the village across the water.

Just before heading to Fogo I had done a little Googling which is when I discovered that one of those really wonderful, off the beaten path, expensive inns I had seen one day while day-dreaming around the internet was actually here… on Fogo and in Joe Batt’s Arm!  Ed would not indulge me 😦

Zita Cobb left her home of Fogo Island at the age of 16, but after making millions in the dot com industry she returned to help the islanders she loved.  Long story short, she had this 29 suite inn built and decorated by local artists and workers.  It offers employment for up to 70 islanders and profits are used in many ways to help Fogo.  We have heard Newfoundlanders praise her efforts and express disdain that they could never afford to stay.  Personally Ed thinks it’s about the ugliest thing he ever saw.  The retired Coast Guard ice breaker is part of the recognition of Canada’s 150 year celebration . It is crossing from one coast to the other visiting communities along the way.  It was in town for the annual Dory Races in Joe Batt’s Arm.

We did the hike out to the Giant Auk sculpture and sat for a long time just watching the ice, waves and birds. 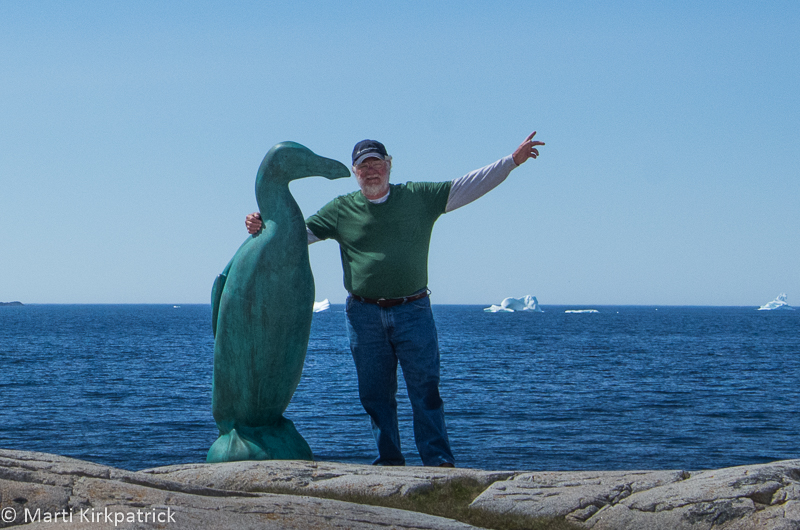 The Great Auk was hunted to extinction so now it gets a bronze statue to remember it by.  It is looking  towards Iceland where there is a matching Auk looking back. No, while big, they were not this big, but about 30″ tall.

Back in Fogo the village, we did the hike at Lion’s Den and also the hike up to Fogo Head.

Along the Lion’s Den Hike looking back to Shoal Tickle.  A tickle is a narrow and shallow passage of water that will “tickle” the bottom of your boat as you pass over if you aren’t careful.

Looking back at some of Fogo Village and Brimstone Head from Fogo Head. The pond is an old impoundment for the town’s water supply.

We watched icebergs for hours.  We had long conversations with the nicest people with the most wonderful accents (not all of which we completely understood).  We fell in love with an incredibly beautiful, quiet, rugged and magical spot populated with kind, caring, hard working honest folks.  We stayed 8 days…..a record for us.  This is a MVL (Must Visit List) place if ever there was one….but you must slow down and be content to just sit quietly for a long time to watch, see, absorb…..and to be rejuvenated.

That’s a big fishing boat, did you even notice it…  there is a reason there’s a huge Facebook Group following the Newfoundland icebergs. 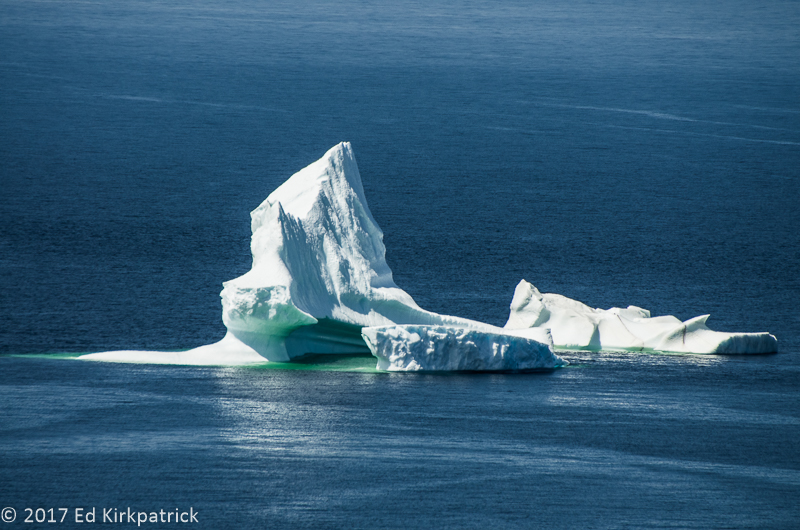 Watching them, waiting for the moment a piece breaks off or it splits, the sound, a cannon-shot and then they roll over.  It becomes addictive, and peaceful.

Here, we happened to be looking in the right direction when a chunk fell off, we heard the sound and Ed started shooting.  I wish you could hear it.  Come to Newfoundland next June. 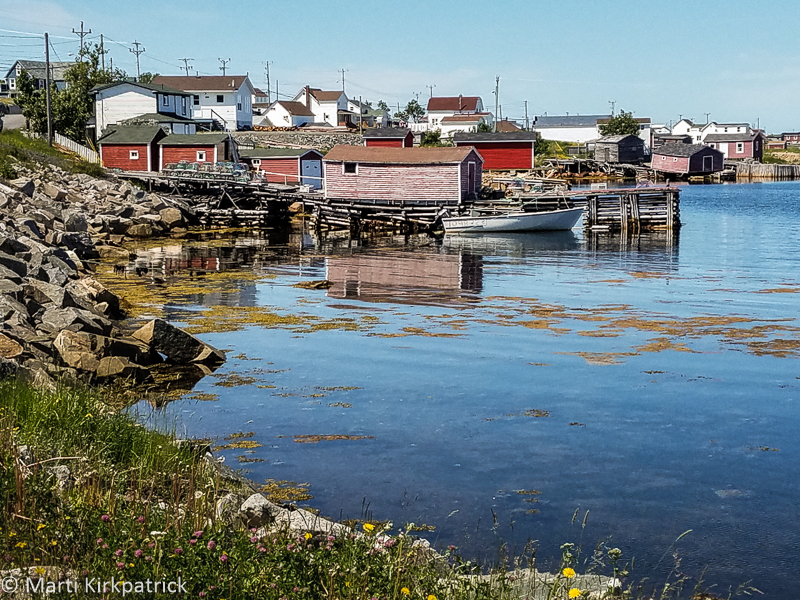 A bit of Joe Batt’s Arm. 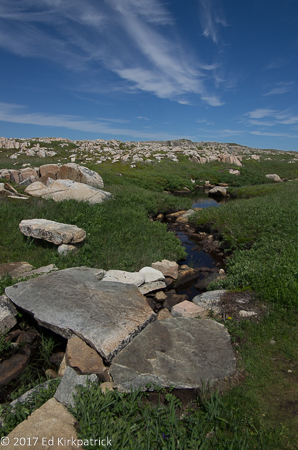 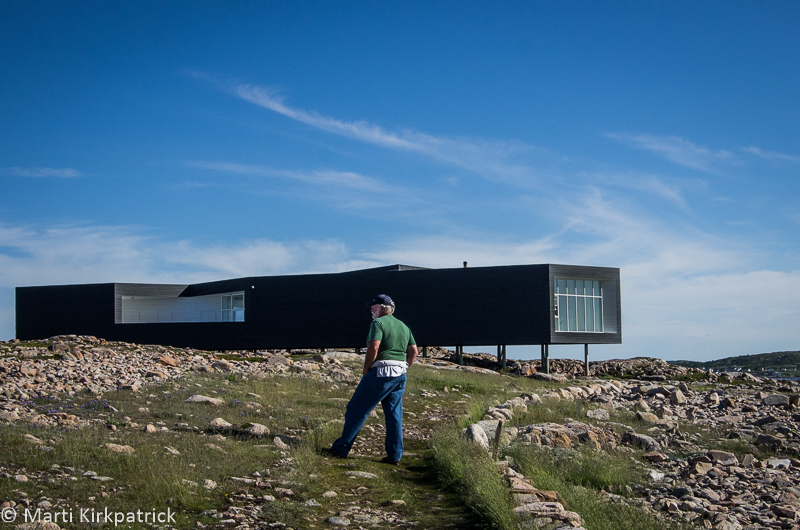 Designed by the same architect as the Inn, this is the largest of four working artist’s studios around the island.

Detail of a small pool and rock on our walk out to the Auk. The water is stained by the peat and reflects clouds and sky nicely.

The interior of the fishing stage at Dwyers Premises

From the trailhead of Lion’s Den looking back at Fogo.

At the end of the day, after an unusual thunderstorm the clearing sky over our cove.

With apologies for the length of this post we offer you a little Maker’s Mark over 15,000 year old ice.