Please bear with me as I offer a word about this posting.  For those of you who follow us on a map….there are indeed a few miles (405 miles/653 kilometers) between the ferries from Labrador to the town of Twillingate where this posting begins. Having either covered the area before and/or because a lot of it’s on the TCH (Trans Canada Highway) and not a place which we explored or of which we took photos the decision was to skip ahead, soooo, here we go. You are not missing anything! 🙂

Welcome to Twillingate, Iceberg Capital of the World according to their signage and advertising and indeed there were a good number of icebergs to see. 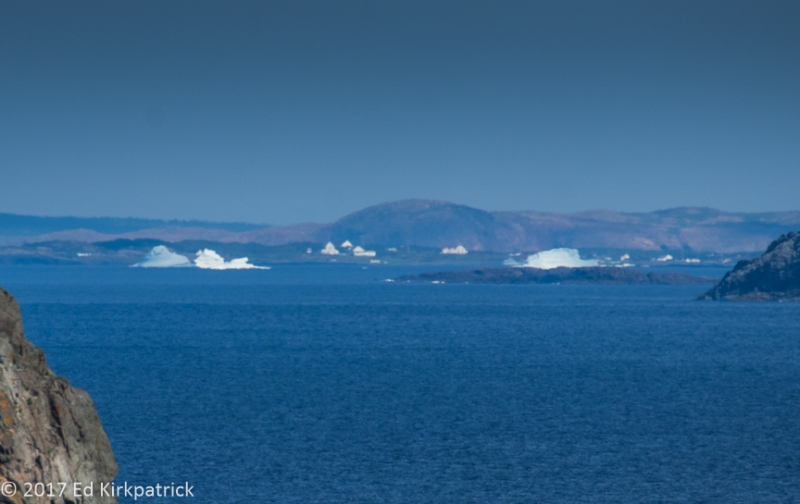 Yes, there are a few icebergs.  It was a hazy day and they were a few miles off… but look at all that ice.

On the official Newfoundland map the Twillingate ~ New World Island area actually has its own enlargement which is quite handy as it covers three main islands, lots of coves, points and arms.   The roads for the most part are awful and we did arrive in the fog and mist soon to be rain, which wasn’t helpful, but hey we’ve learned, it is Newfoundland and the Sun will come out, tomorrow, tomorrow!  Hey, that’s a good idea for a song! 🙂

We stayed at Peyton’s Woods RV Park which has a laundry, and those can be a bit hard to find here so, yippee!   It is just a short drive from here out to the Long Point Lighthouse at Crow Head where there is also an elevated viewing platform. 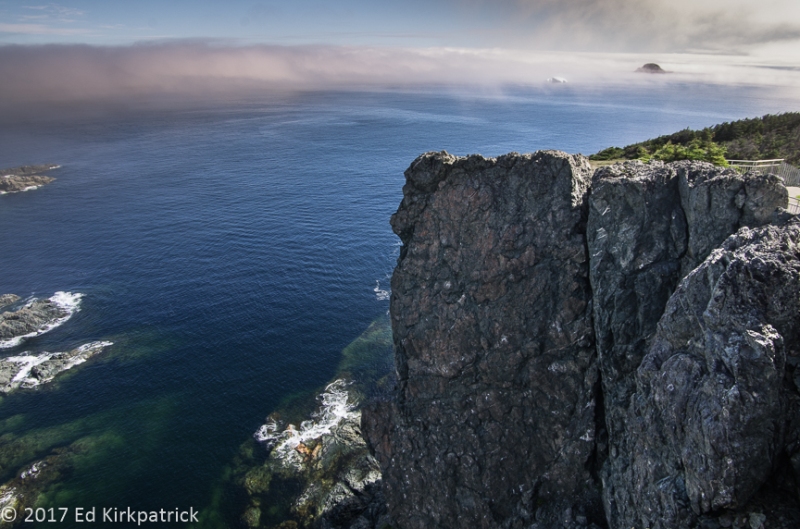 A few hundred feet above the sea, the view from Long Point Lighthouse is grand, even with fog…  Even because of the fog.

Long Point Lighthouse.  Both times we were here, the lighthouse was closed. It is interesting to note however, that apparently the lighthouse is most unusual because it was designed and built for two families.

We drove down 340 and out the 345 arm to Tizzard’s Harbour and enjoyed the views and icebergs.  The landscape here is more mountains and tight coves with small villages tucked into little harbours.

Not really sure which place this is, but note as we have, the lack of pleasure boats.  All these boats are working boats.  So far on our visit to Newfoundland we have not seen a single non-working boat.

We especially enjoyed the little village of Valley Pond where we had a nice conversation with an older gentleman who wandered over to ask where we were from.  Chatting is something Newfoundlanders love to do as does my dear husband.  In fact, we have had the most delightful chats, both long and short, with many Newfie folks who might possibly be the friendliest people on the planet.

Over a ways to the left is where we had our nice chat with the man who lives in this house, cuts and stacks this wood and stays warm during the winter.

Over by Durrell just east of Twillingate town there’s the French Beach Trail which we took out towards French Head.

Did you note that iceberg in the picture before?…  from French Head this is it next to Bacalhao Island nearly 8 miles away.  A big piece of ice and most of it is underwater. Yes, I have a telephoto lens.

The weather was not our friend and we did not cover this area as thoroughly as we generally do, we mostly just drove about the countryside. All prejudice aside, I do think these particular photographs of Eds are especially magnificent and I hope you enjoying seeing them more than reading my ramblings 🙂

Also, truth be told, while in Twillingate we had another place on our radar…. Next post, a ferry ride and Fogo Island!!

From Long Point Lighthouse it was very foggy but look at the iceberg ghost.

Long Point as the fog recedes.  You can’t believe the changes it makes moment to moment. Magic.

As the fog receded we walked around below the Long Point light.

Marti just can’t get over the fact that this is a big fat red milk bottle.  I guess you have to be old enough….

Seagulls get a front row seat to waves crashing.

This iceberg is still attached below water but has a gap that waves crash through.  Soon it will separate and roll over.

This the whole iceberg…  note the pale green underwater part and there’s a lot more we can’t see.

A bit of Canadian charm in Valley Pond.

On our hike around French Head it’s not always about the ocean. 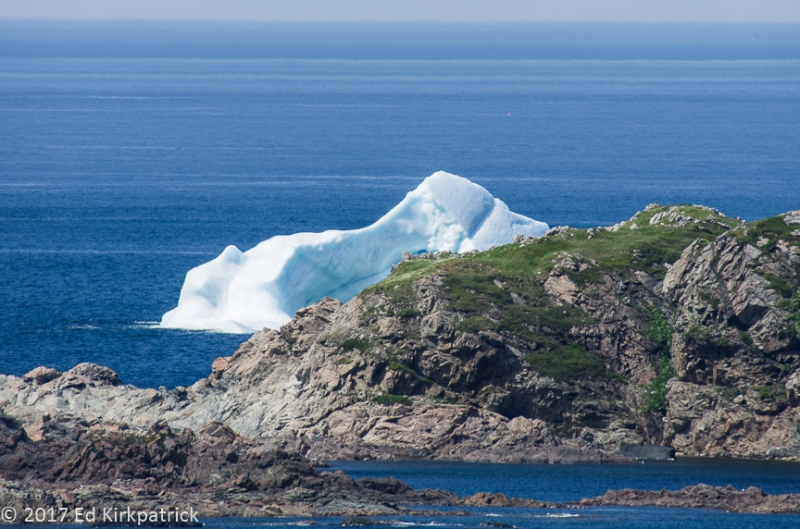 We watched this iceberg float behind this island in about ten minutes. 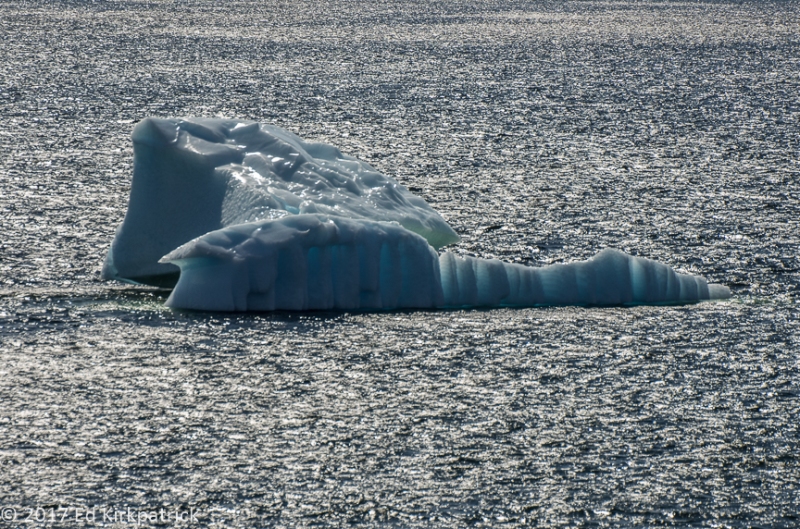 The incredible mystical dance of light on 10,000 plus year old ice and billions of years old water, is beyond my ability to describe, so all you have to do is enjoy it.

The perfect picture.  A boat, a fishing stage, a light and an iceberg. It don’t get no better than this.